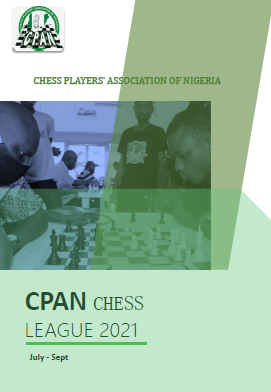 On the 2nd, April 2021 at the unveiling event held virtually on Zoom by the Orchid Lekki Chess Club (OLCC) in Conjunction with The Nigeria Chess Federation, Mr. Martins Amabipi President of the Chess Players Association of Nigeria (CPAN)) who was also in attendance submitted that CPAN will be organizing a FIDE-rated tournament around June.

“CPAN is planning to organize an original tournament that will be rated around June – August. It is going to be a 9 round Classical, Rapid, and Blitz. The proposed location is Lagos, Abuja, and Port Harcourt”.

Less than a month after this statement was made, the Chess Players Association of Nigeria (CPAN) has officially announced the 2021 edition of the CPAN league.

As stated before the official release by the CPAN president, the event will be FIDE rated, and as expected, all participating players are expected to have FIDE IDs.

According to the official release, the 2021 edition of the CPAN league will be in a different format compared to previous editions.

Previous editions have been played in Lagos only.

However, for this year’s edition, the league will be played simultaneously across 3 cities, with a projection that 400 players grouped into 40 teams will be participating.

Additionally, there shall be champions at each region, while an overall champion team will be determined in an online format, by the 3 zonal winning teams.

The three cities where this league will be played are:

The Format adopted for the league:

The League is SCHEDULE for:

Anticipate the 2021 Edition of the CPAN league. Stay tuned for regular updates

Danhypro U-20 Chess Tournament: One Commitment, One Passion, Everything Set.