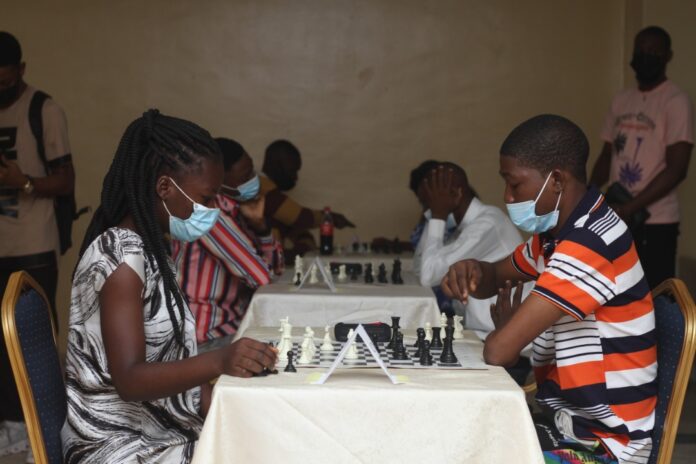 The DanhyPro Chess U-20 Tournament started at exactly 9:00 AM. The arbiters ensured fairness and kept guardians and parents from distracting the players as necessary.

The game continued and some players quickly made their presence known by making interesting marks; Players like Ferdinard Tersay Joseph, picking up quick point defeating Ekunke Odey Goodness in round one. He later won another against Iyefu Onoja in round two and defeated Afolabi Emmanuel in round three.

In round 3 of the competition, only two (2) of the rated players were on the top 5 ranks.
At the end of round three, the tournament top-seeded player—Eyetonghan Denyefa Callistus rated 2014 takes the 11th position on the ranking table after having a tough match playing the black pieces in the third round against the Arena Candidate Master (ACM) Iwuozor John in a London system game that saw ACM Iwuzor John win a quite interesting knight, Bishop vs Bishop, pawn end game.

The defending champ—Okemakinde Toluwanimi seats on the 6th rank after a draw match as white against Abdullahi Adamu in the third round.

Meanwhile, the top five players on the rank after the third round holds perfect scores of 3 points each, but apparently, the numbers won’t be so perfect after the 4th round.

CM Okeke Isaac continued with a fourth win in a row defeating ACM Iwuozor John on board two, while the board one players slowed each other down by half a point allowing CM Isaac Okeke to take the sole lead with 4 points while Okemakinde Toluwanimi won his fourth game to join up on the 2nd rank with 3½ point along with Idara Emmanuel, Olisa Tennyson, Osadebe Michael Ikechukwu.

There was an hour break after round three for the players to get some rest while they enjoyed snacks and drinks provided by the organizers.

The fourth round kicked off at 1:00 pm prompt, among many entertaining games of the round, the most interesting game came from the board 6 match where top seed Eyetonghan Denyefa Callistus lost to Jessica Tirnom Bello, putting Jessica on the top of the Best females list with 3 points.

The tournament continues tomorrow Sunday, 25th April, 2021, where we broadcast a live commentary of the board 1 game where anyone and everyone can join in to analyze and make comments. Many thanks to everyone who joined the commentary today.

Earlier in the rounds, FIDE Master Fawole John Oyeyemi commented on the National Chess WhatsApp group: “it’s a juniors’ tournament, anything can happen” let’s see if this will mean that we might find some top players being taken down.

Follow our updates and stay tuned to find out.

Danhypro U-20 Chess Tournament: One Commitment, One Passion, Everything Set.