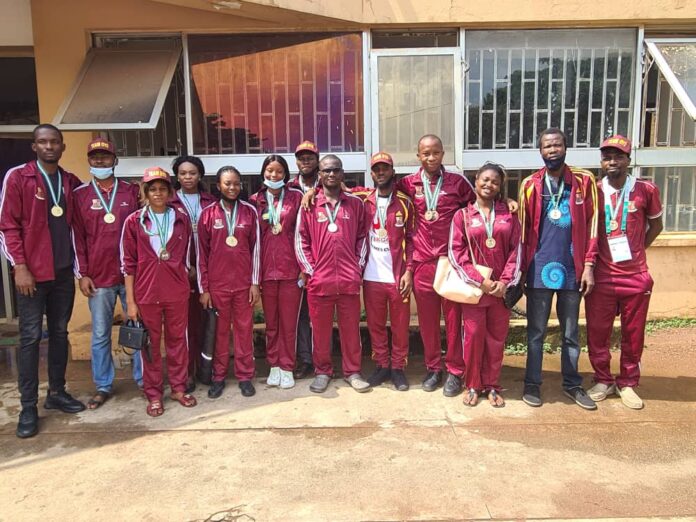 Earlier in the tournament, we ran an online contest for audiences to vote for their favorite team in the NSF, and interestingly, the Oyo State got the most vote. No surprise they are the top-seeded team of the chess event at the 20th National Sports Festival. The title-packed team is known to be unstoppable. Worthy to note the Oyo state Male team is winning the Gold medal for three festivals in a row. They were champions in 2016, 2018, and now 2021. Whatever the case may be, they did live up to expectations.

The Oyo state team secured the team gold medals after defeating the Akwa Ibom State in a 2 ½ – 1 ½ match, a match that saw Etukakpan Leonard—2142 prove himself once again as a master player when he defeated FIDE Master Akinseye Abiola—2236.

Ever wonder what happens when a master player loses guard against a strong Opens player? This happens a lot of times. DENNIS OGBOGHO—2087 vs Oluwadare Samuel ended in ½ – ½. FM Onovughe Ochuko Emmanuel—2146 vs Rapheal Titoluwanimi—1898 also ½ – ½. It could have been worst, but Team Bauchi couldn’t hold their own against Team Delta state, the match ended with Team Delta walking away with Team silver medal after scoring a match point of 3 – 1 against the Bauchi State.

Going away with the team Bronze medal after seven (7) days-long chess event is the Team Bayelsa. Team Niger enlisted all four (4) players in the last round but two (2) players were absent on board three (3) and four (4) respectively. This made it easier for Team Bayelsa to secure the necessary match point for Bronze.

Even though the Host team—the Edo State team have lost out in the race for medals, they ensured to close the tournament on a good note by defeating the Team Yobe 3-1.

The individual board medals fight couldn’t be concluded on the 9th round as there were many players with good percentile performance.

The first result for board medals after 9 rounds match is as follow.

The play-offs for board 2, 3, 5, and 6 started at 10 am on the morning of Tuesday 13th April, 2021. Rapid format was adopted. Alternating color— each player competing for a particular board medal will have to play at least two games against the other contender(s) as white and black side, in the event of a draw outcome, they will play a blitz match.

IZUOGU MICKEY and COLE CHRISTOPHER couldn’t keep up in the play-off for the board three (3) medals.

FM ADEBAYO ADEGBOYEGA knocked down all four contenders to retain the Gold medal. BASHIR RABIU of the Kano State went took a Silver medal, Oragwu chukwunonso—who have already received a Gold medal for the blitz event along with the team Silver medal got a bronze board medal after play-offs.

It was a tough battle for board six (6) Gold. The only play-off that lasted over 3hours, the player with the nerves of steel eventually came tops. Emmanuel Nwala won a Gold medal after defeating TInubu Babajide and Olusoga Olawale. Tinubu Babajide settled for Silver & Olusoga Olawale—Bronze.

In the main event, the individual board medal was awarded as a tradition to reward each outstanding member for their contributions to the team. It is very impressive to see that 20 teams out of the 28 participated states earned at least a medal by means of a board medal

•Most Valuable Player at the Edo2020 Chess Event

•Youngest Player with the best performance at the Edo2020 Chess Event

•Youngest player with second-best performance at the Edo2020 Chess Event

•Player attending a chess tournament for the first time with the best performance.

•Special Award to the Chief Arbiter

We will like to use this medium to thank everyone who followed and read our reports all through the National Sports festival EDO 2020. It has been a privilege being your information go-to for the Chess event at the NSF.