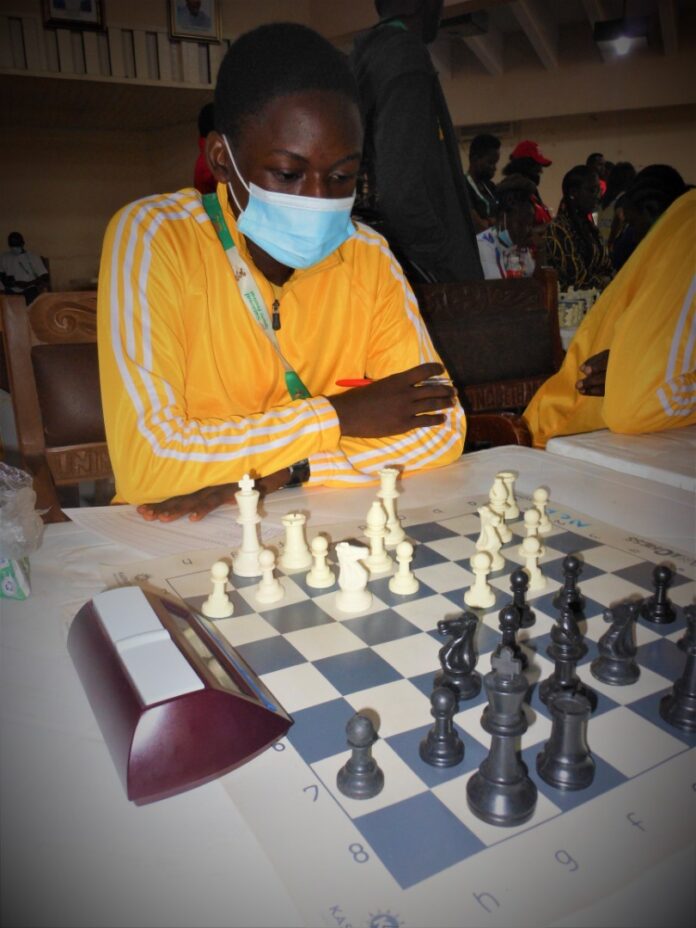 Five rounds into the National Sports Festival, very few players have played and won all 5 games without seating out. These players are Omorere Benjamin Aruoture of the Delta State and JONAH MOSES PIUS of the Cross River State. Other players like Etukakpan Leonard of the Akwa Ibom State, BASHIR RABIU of the Kano State, and FM Adebayo Adegboyega also have 5points but earned a walkover or two to get there.

However, in the Female section, there is only one player with a perfect 5/5 and that is Assa Oluwaseun of the Ogun State Team. After delivering two wins, the team was only able to earn a complete 2match point in the 5th round alone.

That might sound interesting for the team’s star player but not enough for the Ogun state team as they now place 5th on the rank table with 7 match points.

It was a good day for the Lagos “Amazons”, after landing two wins in the 4th and 5th round today, the Lagos State Female team now sits at the top of the rank table with 9match points.

Though the team had a very good day, it, however, didn’t end so happily for WCM EHIRIM CHINYERE-1728 as she blundered a completely winning Queen and rook vs Rook pawn ending against fellow Olympian Samson Peace-1718 when she played the only forbidden move on the board which allowed her opponent to get MAD-ROOK play on her forcing a draw.

The Oyo state being on the receiving end wasn’t a good one for the Title-packed team, the loss to Lagos state caused the team a step down from the trophy position which is now occupied by the Lagos state. Will the Lagos state team be able to retain that position to the end? Their performance in the 6th round against the Delta Team will tell.

After defeating the Sokoto State Team in the fourth round, the Delta Team took on Bayelsa State, without their star player (WIM elect, Ofowino, Toritsemuwa) the team was able to take away all 4 points from the Bayelsa State and now rank 4th in the tournament with Lagos state on their way to the #1 spot.

The Plateau State vs Edo State ended ½:3½ which could have been 1-3, but MILLICENT AIGHOGHO denied her opponent of the full point when she called on the arbiter to claim the position to be a technical draw.

The arbiter in charge (FIDE Arbiter Oyebanji, Ademola Peter) at first ruled against the complaint but after so much pressing the arbiter with the assistance of the (Deputy Arbiter IA Obinna Ogbonnaya) scrutinized the game and found there have been a three-fold repetition few moves earlier hence, the game adjourned a draw.

Rank after Round 5 FEMALE

Delta State and Oyo State lead the male section both with 9 match points but the Deltas top the table with 0.5 game point difference to the Oyo states’ 15pts (GP), followed by Bayelsa State and Ogun State both with 8pts (MP).

It was a tough round for Ogun State in the 5th round against the Ondo State players, but all thanks to their 2nd board and team’s highest-rated player, Akande Temitope– 2113 for delivering a very crucial win against Ikuenomore Ayodeji Olumuyiwa– 1831.

After a very long match, the Oyo vs Delta match ended in a “pleasant but not quite” manner the Delta were comfortable getting a draw from the match but not all the team members were happy with how their games ended.

FIDE Master Onovughe, Ochuko Emmanuel lost it after the helpless loss to FM Akintoye Abdulrahman which he flagged on time while thinking about how to slip out of a coming checkmate in few moves from the Tripple-A.

The race continues, who will win the Edo2020 National Sports festival?

Although, still a little unclear at this point, but we will like to know what team you consider favorite. See the voting link below.

Today, Saturday 10th, 2021 is going to be the Blitz match, and we will be streaming live on Instagram so you can catch all the fun.

Rank after Round 5 MALE

Annotation:
Tie Break1: Matchpoints (2 for wins, 1 for Draws, 0 for Losses)
Tie Break2: points (game-points)
Tie Break3: The results of the teams in the same point group according to Matchpoints