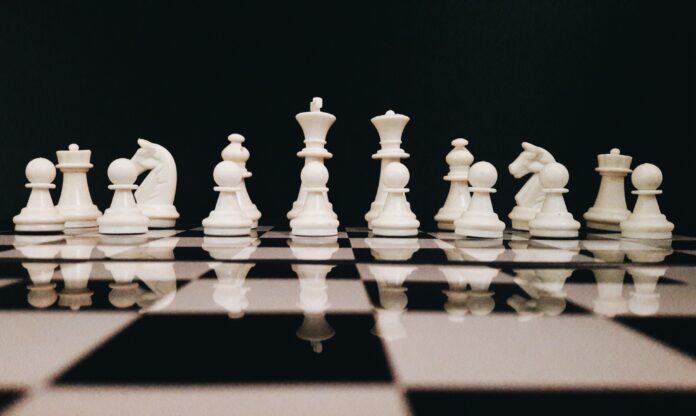 Not too long ago my mother told me about how chess has gained fresh popularity due to “The Queen’s Gambit,” a hit Netflix drama named after a fundamental opening. I’m an avid chess player and like to think of myself as a somewhat formidable opponent. My main adversary is Wally, an especially gifted player with chess pieces tattooed on his knuckles. In his quest to practice enough to become a grandmaster, he beats me consistently.

I don’t mind losing to Wally, but being in prison during the COVID-19 pandemic is the worst. It’s like being at the center of one of those Russian nesting dolls—a box within a box within a box. Social distancing policies limit our access to recreation yards, the dayroom, classes and phones. Some days we spend roughly 23 hours in our 6-by-10 cells. And on top of everything, board games—including chess—have been completely banned to promote social distancing. This situation has forced us to create a new approach to a classic game.

For a few desolate days after the “No Board Games Allowed” sign was posted, it seemed that Wally’s quest to become a grandmaster would be on hold indefinitely. But Wally and I are not the type to give up on our dreams.

Fortunately for us—and unfortunately for our neighbors—we live on the same row, two cells apart. Since we’re in shouting distance of one another, we decided to play the game in our respective cells. We both set up our chess boards and used algebraic notations to tell—or yell—our moves to one another. Then we moved the corresponding pieces on our boards.

To understand how our game sounded to our disgruntled neighbors, a brief explanation of the chess board is necessary. The columns on the board are referenced by the letters A to H. The rows are referenced by the numbers 1 to 8. So every square on the board has its own letter and number that we use to describe where the pieces move. So if I move a bishop to c6, I say, “bishop c6.” (For pawns it would just be “c6.”)

But prison is loud, and the letters B, C, D and E sound very similar over a ruckus. To avoid confusion Wally and I came up with a nomenclature for those letters: “alligator” for A, “baseball” for B, “constellation” for C, “dinosaur” for D, “elephant” for E and “golf ball” for G.

We became the butt of jokes because of how ridiculous we sounded yelling out moves like, “dinosaur 4!” But the ridicule didn’t bother us. We were only deterred by the fact that playing the game this way took at least three hours.

The following day, Wally and I were sitting together at a metal table during a measly hour in the dayroom. We were reminiscing about how we used to be able to play chess at that very table, and just like that one of my most absurd ideas to date was born. “Why don’t we just play in our heads?” I asked Wally with 50 percent sarcasm. I wasn’t serious, but Wally latched on to my idea like a fish to a hook.

With a sense of joy that had been missing since the pandemic started, we began our first game of mental chess. We each made a few moves, getting our bearings. We played until an officer yelled, “Rack it up!” Our hour was over.

Despite the fact that Wally lives fewer than 20 feet away from me, the only other time I would have a chance to see him is when they let us out for a meal. When I caught up to him in the cafeteria later that day, the first words out of his mouth were, “Do you remember where everything is?” “Of course I do,” I replied. “It’s your turn.”

We started playing again, and the spaced out expressions on our faces captured the curiosity of a few inmates nearby. It was obvious we were doing something together, but we weren’t talking. Then Wally declared, “Knight captures on elephant 7, check!” And I said, “Man, that was a great move! I didn’t even see it!” The men looked at us like we were totally nuts for a split second then went about their business. It was hilarious to Wally and me. We loved transcending the literal barriers of time and space and challenging ourselves in a creative way.

Now Wally and I start our games in the dayroom, continue the next day at lunch, and finish three days later by yelling from our cells. Which leads me to our most recent game in the dayroom.

“Dinosaur 4!” Wally began. He was leading me into the Queen’s Gambit, a very effective opening. We were sitting on a metal bench, one of many bolted to the concrete floor in front of the TV. Someone sitting on the other side of Wally asked, “What movie is this?” Neither of us responded. The man asked more insistently, “Hey, what movie is on TV?”

Giving in to the intrusion, Wally replied, “I don’t know, I’m not watching it.”

“What do you mean?” the guy demanded. “You’re staring right at it.”

“I’m actually playing chess,” Wally said. Gesturing toward me he added, “We’re playing against each other in our minds.”

I gave the guy a corroborating nod so my friend didn’t sound totally crazy. Wally went on to describe how we visualize the board to keep track of each other’s moves. It turned out that the man was a chess player himself. He was interested in seeing how our game would go. So Wally and I continued playing, only talking to make our moves or to clarify our odd nomenclature for our spectator.

A man farther down the bench asked our spectator, “What are you doin,’ bro?” He responded, “I’m watching them play chess.” The other man looked at us, and then back to his homeboy. “You’re… what?” It took a serious effort for me to suppress my laughter and stay focused. By the end of the hour, I was humbled and encouraged to see that several more guys had become intrigued by our idea and wanted to try their hand—or should I say their brain—at a game.

It may be wishful thinking to say that we’ll have a mental chess tournament anytime soon, but with the quirky square names and the sheer challenge, it’s certainly trending. More importantly, this intellectual oasis we created in the middle of a lonely desert brings people from diverse cultures and backgrounds together. At the heart of our mental chess game lies a profound lesson: It is easy to play the victim in life, to allow your circumstances to dictate your disposition. But the difference between being content or distraught is a matter of perspective. Every one of us has the ability to cultivate the perspective we want for ourselves and apply it to our experience. While we have been forced to relinquish our physical freedom, we don’t have to give up control over our minds. And who knows? Maybe one of these days I’ll finally beat Wally.

ChessPlus to Organize an Open Day For Educators! Registration is FREE!

Chess in Africa Adesewa - February 25, 2021
0
It was an all-packed Chess action weekend at the Maiden Edition of the Ibadan Chess League. The chess league which was held...

World Chess News Adesewa - February 24, 2021
0
Original Article from: www.techmahindra.com Tech Mahindra Ltd., one of the fastest-growing global IT companies and a leading provider of...