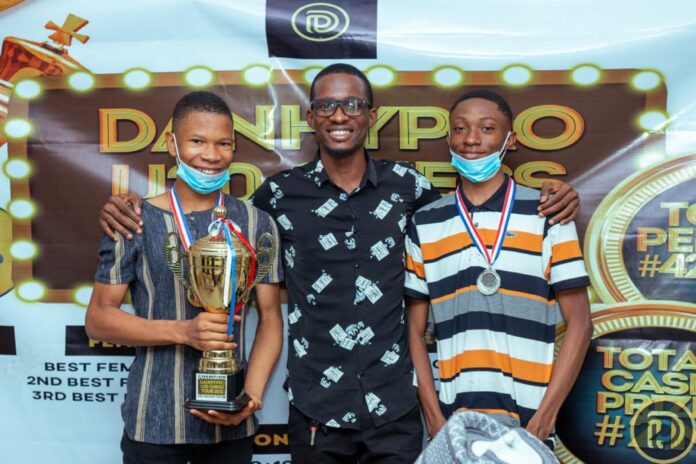 The Danhypro u20 Chess Tour Port Harcourt Edition was held on the 30th-31st of January 2021 at the Aldgate Hotel, 308 Sani Abacha Road, GRA Phase III, Port Harcourt, Rivers State. The tournament was of 9 rounds, with a time control of 10 minutes + 10 seconds, 25 participants and a total of 425 thousand Naira in cash prize to be won.

All participants of the tournament brought with them their A-game and determination to win, as the event was filled with suspense, unpredictable victories and fun. All along, the Arbiter, Titoluwanimi Raphael ensured decorum in the playing hall and strict adherence to all chess rules by participants.

For first place, Okemakinde Toluwanimi and Olisa Tennyson had a tie. Both participants had 7.5 points. In the end, Okemakinde Toluwanimi won on tiebreaks and took the trophy home. However, the prize for the first and second position were shared equally between both players leaving them with a cash prize of 80,000 Naira each.

Candidate Master Okeke Isaac (the only titled player of the event) finished third place and went home with a cash prize of 40,000 Naira.

For the Under-14 Male category, Ekunke Goodness who is only 10-years-old outshined much older participants and won the first position with a cash prize of 20,000 Naira.

The female category had Onoja Iyefu and Omesu miracle tie for 1st place with a cash prize of 15,000 Naira each.

Izu Stephanie finished on 3rd Position in the Female Cayegory.

The Danhypro u20 Chess Tour Port Harcourt Edition was also graced by a special guest, FIDE Master Emmanuel Omuku, a two-time representative at the World Junior Chess Championships in 1977 and 1978, then National Champion in the 80s and Chess Olympiad qualifier/player.

FIDE Master Emmanuel Omuku also expressed admiration by the level of play at the tournament. According to him “The future of chess in Nigeria and the pursuit for our first grandmaster will be a dream fast turned to reality if more support like this continues to be given to the juniors and Nigeria chess will definitely gain greater heights as chess will serve as a hub for youths to connect beyond boundaries, which used to be a challenge in my time.”

The Danhypro u20 Chess Tour 2021 started on a good note with the Port Harcourt Edition and hope, that will set a higher and better standard for other states included in the tour. States included in the Danhypro u20 2021 Chess Tour, yet to be visited are Abuja, Asaba and finally, Lagos, with a total cash prize of 2 million Naira after all four states have been visited.

At the end of the event, the CEO of DanhyPro Services Limited, International Master Daniel Anwuli, delivered a closing speech. He congratulated the winners of the tournament and further motivated the participants to keep striving for improvement and never fail to cease full advantage of every opportunity availed to them in the world of sports via chess. He ended his closing speech with the statement that the future of Nigeria chess belongs to the juniors and that they should never relent regardless of challenges.

Chess in Africa Adesewa - February 25, 2021
0
It was an all-packed Chess action weekend at the Maiden Edition of the Ibadan Chess League. The chess league which was held...

World Chess News Adesewa - February 24, 2021
0
Original Article from: www.techmahindra.com Tech Mahindra Ltd., one of the fastest-growing global IT companies and a leading provider of...