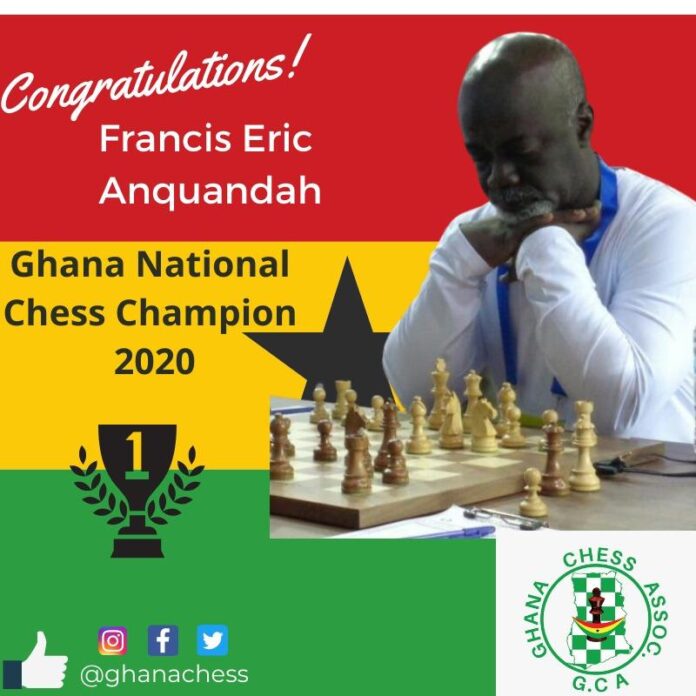 The competition which started in November 2019 was played in two phases, which ended with finals on 2nd January 2021 at the Accra Sports Stadium. Ghana’s International Master, Francis Anquandah won his first national title back in 1986, the same year participated in Ghana’s first Chess Olympiad held in Dubai.

Following an unimpressive outing at last year’s edition, Francis did well to bounce back as he went unbeaten in the 9 round event managing 5 wins and 4 draws, totalling 7 points. Meanwhile, closest contender, Joseph Jamena Mensah, won 2nd place after managing 6.5 points. Jamena, although had a good start to the tournament, had his hopes curtailed in the 7th round when he suffered a painful defeat to Kumasi sensation, Dr Kwabena Adu-Poku who later won third place. The defending champion, John Kojo Hasford did not get the podium this time after surprising losses to Prince Akpa and Aikins Dwamena best players of UHAS and UG chess clubs respectively.

The women category, however, saw defending champion, Felix Abena Tobi, who recently graduated from the University of Ghana retaining her title for the third time consecutively. Second place went to Maud Benson of Achimota Senior High School who was touted to win the tournament as she led to log after the 7th round. Her hopes were however dashed after a painful defeat to Christiana Ashley, a member of the Ghana Olympiad team. The latter took third place at the end of proceedings.

The junior u-20 division saw the emergence of 14-year-old Enock Nenyo Kpodzi of Great Stars Montessori school after clinching first place. He was followed closely by UK-based new chess sensation Philip Selikem Amoako, who was spotted in the news presenting the chess laurels he won in the UK to former President John Agyekum Kuffour sometime in 2019. The 3rd spot in the junior division went to Achimota Senior High School leaver, Joseph Sovereign, won gold in a similar event in 2019. Missing from the Junior event, however, was Dave Quansah Acheampong who won a gold medal at the recent African Under 9 championships hosted online by the Kenyan Chess Federation.

Following the postponement of the Chess Olympiad due to the COVID-19 pandemic, the team would have to play in next year’s nationals to qualify to the next Olympiad to be hosted by Russia in 2022. The winners were nevertheless awarded trophies, medals and cash prizes by the Ghana Chess Association.