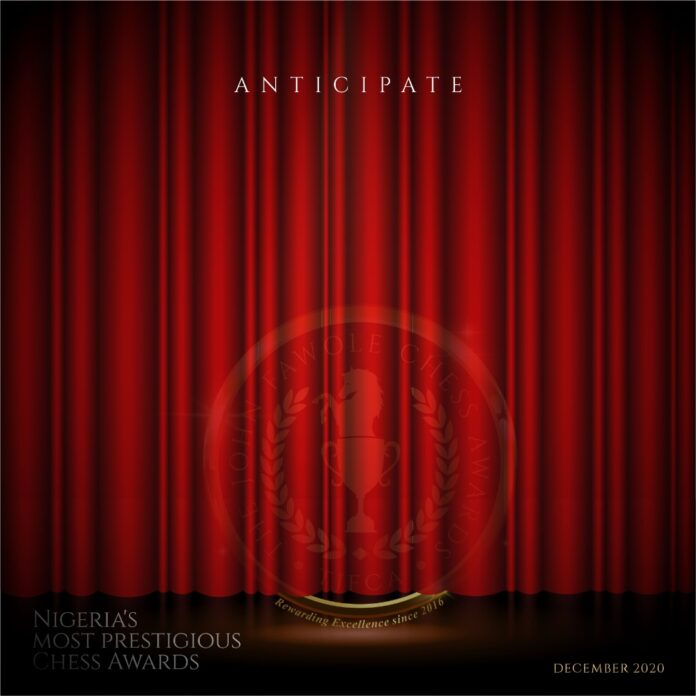 We are excited to announce that The John Fawole Chess Awards will be held virtually on the 12th day of December 2020.

The John Fawole Chess Awards started in 2016 as an online voting Award until 2019 where it made its first successful live appearance at Chevron Recreation Center, Gbagada Lagos State, Nigeria.

The success of last year’s event made us all look forward to another live appearance this year (2020). However, due to the ongoing uncertainty regarding the global pandemic- COVID-19, The John Fawole Chess Awards will be held virtually this year (2020).

The goal of The John Fawole Chess Awards remains the celebration of excellence for chess players and supporters who have contributed immensely to the development of chess in Nigeria, either through an excellent representation of Nigeria in chess events or through a deliberate and charitable promotion of chess among the citizens of Nigeria.

The John Fawole Chess Awards which started in the year 2016 by FIDE Master John Oyeyemi Fawole is also an avenue for creating chess awareness and popularity.

The John Fawole Chess Awards stands at par with (Nigeria Sports awards) and ever since inception in 2016, we’ve been able to organize awards online and offline, giving out so many Awards between 2016 & 2019.

This year’s awards promises to be the best one yet. Our hashtag on Social Media is #TheJohnFawoleChessAwards, #TJFCA and #NigeriaChessAwards.

Chess in Africa Admin - November 30, 2020
0
Chess can be a very complex game and takes time to master. True, chess can be played by everyone at any age,...

Special Recognition Admin - November 24, 2020
0
Chess development has been one of the major discussion in Africa, and as an extension, Nigeria. Chess has over the years grown...