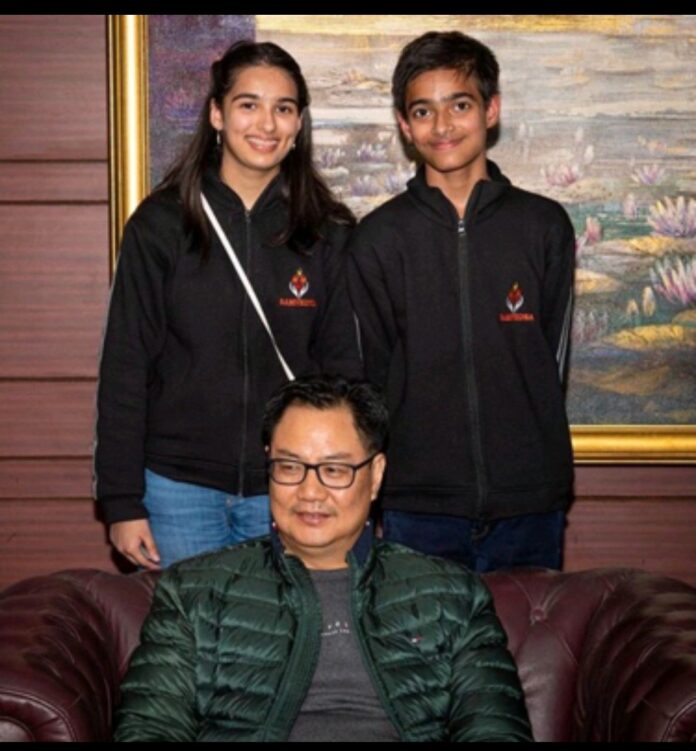 While the global pandemic has brought everything around the world to a halt, these siblings, Bhushita and Bhavik Ahuja have decided to make a difference through chess in India by using their foundation Samvedna to teach young talent and underprivileged children. And also to help provide resources and opportunities to help them grow.

Samvedna was founded last year in September 2019 by Bhushita and Bhavik Ahuja who are currently 15 and 13 years old respectively. They both are international chess players and have been playing for the past 8 years. While Bhushita has been State Champion, Bhavik has won bronze in Commonwealth for the country.

The brother-sister duo, who are deeply passionate about chess started Samvedna foundation as a result, a feeling, a desire to serve the society by teaching chess to the underprivileged section. They want to inculcate a healthy sporting culture in the nation India and take sports to every nook and cranny. Currently, they are teaching 200 underprivileged kids online.

To fund their social projects, they organize tournaments and other events wherein they use the profits made via entry fees to offer opportunities to the well-deserving kids. Their official tournament, held in December 2019 in collaboration with the Delhi Chess Association was a huge success with over 250 participants. The sports minister of the country, Shri Kiren Rijiju as well as the world-renowned sports icon Shri Gautam Gambhir endorses the event with their presence.

Even during Corona, the work continues and Bhushita and Bhavik have been able to conduct 8 online tournaments, an Inspire Talk by GM Prithu Gupta, and a summer Bootcamp for kids. Their dream is to ignite the fire of chess in others and they have constantly been working towards achieving this goal. They have been featured by Sportskeeda, Chess Base India, and several other media platforms. They have been interviewed by Vilasins Sports Media too.

Bhushita and Bhavik Interview with Sportskeeda.com

In the wake of the outbreak of Covid-19, sports have been a major casualty in India, with several competitions postponed or canceled in the battle to curb the virus.

While nationwide restrictions and quarantine measures have forced a majority of the sporting icons to stay aloof, two siblings from Delhi are proving to be an inspiration for the entire population of the country.

Brother and sister, Bhavik and Bhushita Ahuja are the founding members of Samvedna – a foundation that aims to sow the seeds of sportsmanship in people across India. The primary objective of Samvedna is to organize chess tournaments and use the funds collected through entry fees to take it to the slums of Delhi, where kids are fighting for their living and education.

Bhavik is a commonwealth medalist in Chess, while Bhushita had been crowned as Delhi state champion in the girls’ category. Despite not focusing on full-time chess owing to their academics at the moment, Bhushita and her brother are keen on using it as social responsibility.

“Both of us have been playing chess since we were five (Bhavik) and seven years (Bhushita) old respectively. Having played a million tournaments and spent a gazillion hours in front of the chessboard, this sport has become our passion”, the duo told Sportskeeda in an exclusive interview.

“We were disappointed to have had to leave chess as a career to be able to focus on academics and this led us to initiate Samvedna- a feeling, a desire, a commitment to give back to the one sport that had shaped us into who we are today.

“We wanted to spread the fire of sports in others and especially conduct classes in the slums of India to foster young talent and provide resources and opportunities to the underprivileged to help them grow and achieve.”

Amidst the crisis ushered by the pandemic in recent months, Samvedna has still managed to remain active and conducted various events for their target audience. From competitions to an inspirational talk, the foundation is doing its best to divert young minds from the monotonous and mundane nature of the scenario.

“We’ve organized five tournaments after the nation-wide lockdown and one ‘Inspire Talk’ by Grand Master Prithu Gupta. The tournaments were different formats like blitz, 3-check, crazy house, and bullet. One of the events was also an inter-school one”, they explained.

“We’ve got a great response in all our events so far.

“Samvedna club is proud to announce that we’ve got 185 members till now, 30+ participants in each of the events and about 45 sign-ups for our Inspire talk.

“The biggest tournament so far was the inter-school online event wherein we got 17 school teams and a total of 160 participants.”

The pioneers of Samvedna admits the Covid-19 situation is severely limiting their objectives at the minute, as they are unable to visit the slums to take classes and organize events for the kids there.

“2020 is a challenging year as the current situation limits the possibilities of meeting the objectives that we had earlier planned”, they insist.

“Visiting ‘bastis’ during these unprecedented times is not possible and therefore the weekly classes cannot continue as usual.

“Until the situation in Delhi improves, Samvedna hopes to function online, keep conducting online tournaments and talks to engage the chess community and once the restrictions are over, we will resume our online classes and open more centers in various slum areas of Delhi.

“We also hope to devise an online method of teaching chess to the underprivileged so that they don’t miss out on learning chess while they are in their homes. Hoping that the situation heals, our annual event will be scheduled in December and we hope to make it Fide Rating this time.”

Bhushita and Bhavik also feel Chess does not get the credit it deserves in India and wants to make amends through Samvedna. The determined teenagers firmly believe it can gain popularity if the sport receives the kind of attention enjoyed by cricket or football among the youth.

“It is indeed true that chess was invented in India, however, it is disappointing to see that more than our country, it is way popular in others.

“I believe, to be able to get the position that chess deserves, we must introduce it into the Olympics. Through Samvedna, we further want to introduce chess classes in every school similar to how football and cricket are offered.

“This will help improve its recognition and I’m sure indulging in chess matches will help students develop a multitude of life skills such as patience, creativity, and logical thinking.”

They concluded by stating the slums in her city have plenty of hidden talent waiting to break out of their shells and insists Samvedna will work to try and help them reach out to their dreams in the future.

“We believe there’s a lot of hidden talent in the bastis and by providing them with the essential resources and opportunities, they can one day become grandmasters just like Praggnanandhaa, who is also from that background.

“We hope Samvedna can fill in the gaps that are currently present in the society and act as a ladder for all well-deserving children to reach for the stars”, they concluded.