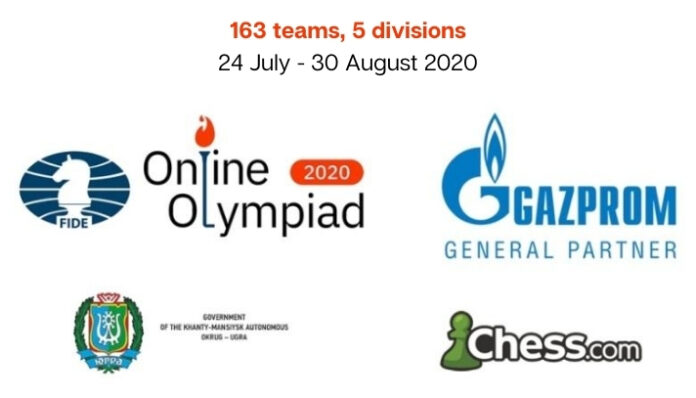 The International Chess Federation partners with Gazprom, Ugra, and Chess.com to launch the biggest online chess event of 2020

The International Chess Federation (FIDE), one of the oldest sporting bodies in the world, is about to launch its biggest online event since its foundation. Teams from 163 countries will battle over a virtual chessboard between July 24 and August 30 to win the first-ever Online Chess Olympiad. Each team will consist of six players, in a mixed format with a minimum of three female players and two junior players.

The event is FIDE’s response to the postponement of the “traditional” Chess Olympiad, which was planned to take place between Moscow and Khanty-Mansiysk (Russia) in August 2020. Involving more than 3,000 participants, the event was rescheduled to 2021, shortly after the IOC had also announced the postponement of the Tokyo Olympic Games.

With the support of Gazprom as General Partner, the government of the Ugra region as Official Partner, and Chess.com as the playing platform, the first FIDE Online Olympiad is the latest example of how chess has adapted to the coronavirus crisis. Despite having to cancel all official events played over the board -including flagship competitions like the Candidates Tournament and the World Championship match-, chess has thrived during the global lockdown.

The initial ranking is topped by Russia, followed by China, USA, Armenia, and Ukraine. The Chinese, absolute winners of the 2018 Chess Olympiad both in the Open and Women’s sections, have also won the Online Nations Cup, played last May.

The time control will be rapid, with 15 minutes + 5 seconds increment per move. The event will consist of two stages: the “Divisions stage”, and the Play-offs stage, from Round of 16 to the final. Since the Online Olympiad is a mixed event, for pairing purposes the ranking was established in accordance with the final standings of the last “Gaprindashvili Cup”, which combines the results in the open and women’s sections at the Batumi Chess Olympiad 2018.