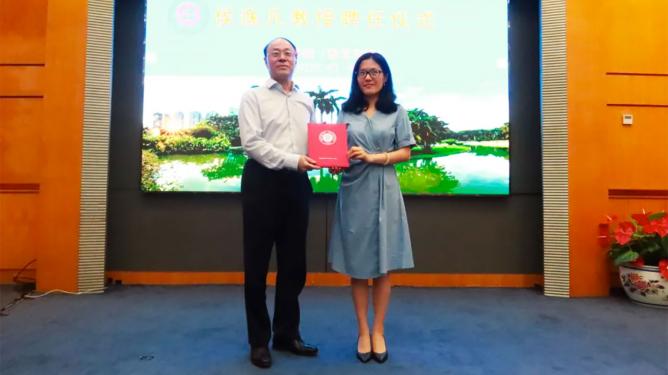 Four-time women’s world champion Hou Yifan has added another prestigious title to her resume. On July 10, she became the youngest ever professor at Shenzhen University. The news was reported by Chinese media and confirmed by Hou to Chess.com.

On Friday morning, at a ceremony at the Shenzhen International Conference Hall, Hou earned the title of Professor at the School of Physical Education of Shenzhen University’s Faculty of Education. At 26, Hou is the youngest person to ever obtain the title at the university.

Shenzhen has a strong chess culture. For the last three years, it hosted the strongest Chinese round-robin tournament, the Shenzhen Masters. With Hou among their staff, Shenzhen University strengthens its educational opportunities for students with a strong talent for chess.

Hou expressed the hope that her presence will do more than that—that chess will not be just a subject, but a tool to promote the combination of sports and education, explore the role of chess in education, and explore its hidden values.

“To train high-level players and help them extend their chess career as much as possible is only one aspect,” she said. “However, the number of professional chess players is very small, so I hope to improve students’ comprehensive abilities and creative thinking through chess. At the same time, it will also be popularized inside and outside the school, expanding the influence of chess and benefiting more young people outside the school.”

A former chess prodigy, Hou is widely considered to be the second-strongest female chess player in history (behind Judit Polgar). Her first women’s world title came at 16 years of age—three years after becoming the youngest female grandmaster in history, in 2008.

In 2017, she scored a historic victory at the Biel Chess Festival, where she was the only player to finish on a 6.5/9 score in the strong, 10-player round-robin event.

Chess, however, was never a full-time occupation for the 26-year-old Chinese. In 2012, she decided to attend Beijing University, and six years later, in September 2018, she started studying in Oxford after winning a Rhodes Scholarship.

To the joy of her fans, Hou is still playing chess every now and then. At the moment, she is a participant in the FIDE Chess.com Women’s Speed Chess Championship, where she will play the final of the Grand Prix’s third leg coming Sunday.

“The teaching experience and the chess experience have something in common,” said Hou. “Outside of the game, I often think about chess-related issues and also consult my chess friends all over the world. I will try my best to build a complete chess education system during my teaching process.”