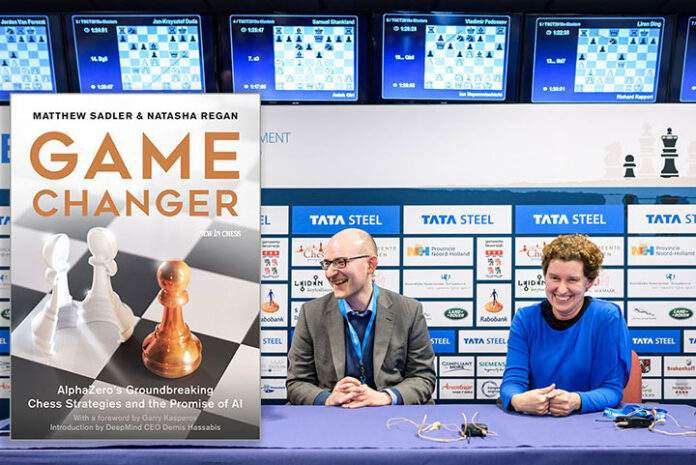 “Game Changer” by Matthew Sadler and Natasha Regan, published by New in Chess, won the Averbakh-Boleslavsky Award to the best book of 2019. Artur Jussupow, who was a member of the jury, said of the book: “It is a unique project that combines human achievements with remarkable development in AI and opens a new approach to our beloved game. We could not choose a more deserving winner”. Books by Sam Shankland and Davorin Kuljasevic were shortlisted.

The acclaimed book Game Changer, by Matthew Sadler and Natasha Regan, is the winner of the Averbakh-Boleslavsky Award to the best book of 2019.

We give the word to Artur Jussupow, who sent us these comments on behalf of the jury:

First of all, we would like to say that it was a great pleasure to read all the three books of the finalists. Each one was different, and we are sure that all these books will find their happy readers.

After a final vote, we had a clear winner: Game Changer by Matthew Sadler and Natasha Regan (New in Chess), which received two first and one second places in the vote.

Some words about the other shortlisted titles: An excellent quality work by Sam Shankland Small steps 2 Success (Quality Chess) gives many tips for the readers who want to deal with the topics of passed pawns. A lot of new material and an exciting author.

The surprising book by Davorin Kuljasevic Beyond Material (New in Chess) unites classical chess literature with fresh ideas and analysis.

Game Changer is a unique project that combines human achievements with remarkable development in AI and opens a new approach to our beloved game. We could not choose a more deserving winner for the best book award of 2019.

It took AlphaZero only a few hours of self-learning to become the chess player that shocked the world. The artificial intelligence system, created by DeepMind, had been fed nothing but the rules of the Royal Game when it beat the world’s strongest chess engine in a prolonged match.

The selection of ten games published in December 2017 created a worldwide sensation: how was it possible to play in such a brilliant and risky style and not lose a single game against an opponent of superhuman strength? For Game Changer, Matthew Sadler and Natasha Regan investigated more than two thousand previously unpublished games by AlphaZero.

They also had unparalleled access to its team of developers and were offered a unique look ‘under the bonnet’ to grasp the depth and breadth of AlphaZero’s search. Sadler and Regan reveal its thinking process and tell the story of human motivation and the techniques that created AlphaZero. Game Changer also presents a collection of lucidly explained chess games of astonishing quality. Both professionals and club players will improve their game by studying AlphaZero’s stunning discoveries in every field that matters: opening preparation, piece mobility, initiative, attacking techniques, long-term sacrifices and much more.

The story of AlphaZero has a wider impact. Game Changer offers intriguing insights into the opportunities and horizons of Artificial Intelligence. Not just in solving games, but in providing solutions for a wide variety of challenges in society. With a foreword by former World Chess Champion Garry Kasparov and an introduction by DeepMind CEO Demis Hassabis.