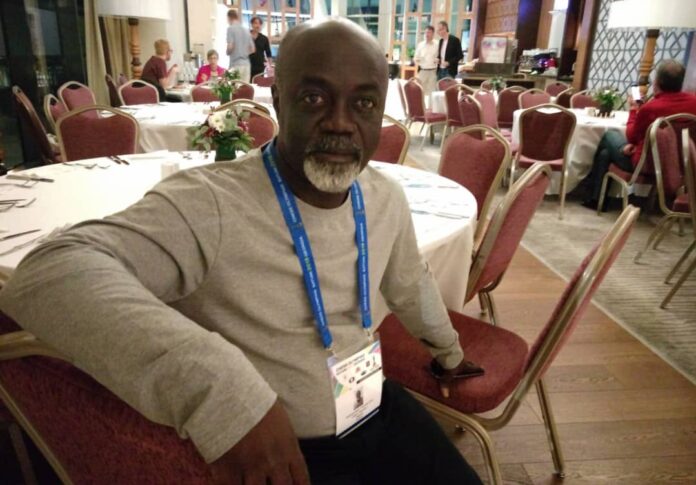 Ghana’s first and only chess International Master Anquandah Francis Eric was interviewed by Adesewa Oyewole for a BruvsChess Media series “Up, Close and Personal“.

The Ghanaian International master explained how he became the first International Master in Ghana, and why he thinks he has remained the only one after so many years. He also gave interesting insights into the chess growth in Ghana, the problems that the Ghana chess community is facing, and so on.

Moderator: How does it feel being Ghana’s first and only international master?

I.M Francis: Looking back at the way I got the title, it feels very exciting to have gotten it. I went for a zonal tournament in Cameroon. I did not expect to get the title and I wasn’t sure I was going too. The intention was to win a prize and get more understanding. The outcome was that I was tied in the first position with a Cameroonian and fortunately for me, I won and was declared the first position. Although my rating was low but FIDE acknowledged me winning the tournament, and that gained me the International Master title.

Moderator: What year was this?

Moderator: When did you start your chess career?

I.M Francis: I wouldn’t call it a career, for me, it is a hobby. I have a career, I am a Chemistry teacher but I would say chess is a serious hobby and I started playing way back in 1984. In 1985, I became Ghana’s junior champion, and the following year I was added on to the Ghana chess team. That was when I started going to Olympiad and other competitions.

Moderator: So far, how many Ghanaian National Chess Championship have you won?

I.M Francis: Seriously I don’t remember all because that is a long history behind. However, the first time I won the title was in 1986. From 1986 till 2000, there were about three National Chess Championships and I won all. After that, I was still winning until I lost it to one guy called Hasford in Ghana. He took the title of the National Chess Champion from me and then I took it back. He took it again and I took it back. It has been alternating between him and me. Currently, he has taken back the title (laughs) but next year I would likely take it back from him(laughs).

Apart from Hasford, there was also one guy called Lionel Adu. He was able to win the title of the National Chess Champion one time from both Hasford and I but he only had it for one year, and then I took back the title and the Hasford took it back from me. It is between Hasford and I. Currently, there are a lot of good players in Ghana and chances are that they would try to overthrow us (laughs).

Moderator: When was your first chess Olympiad?

I.M Francis: This was in 1986. The Olympiad was held in the United Arab Emirates specifically in Dubai. I was there in Dubai and I played board three.

Moderator: Some weeks ago, I had an interview with Watu Kobese, and he spoke extensively about chess in Africa. Most especially the problems chess players face in Africa. What are your thought about chess in Ghana?

I.M Francis: Well currently I would say chess is becoming very active in Ghana. It wasn’t like that before but now there seems to be a lot of activities going on. Now there are many chess clubs and even currently with all the pandemic going on, we are having a lot of events that are being organized online. So I think chess in Ghana is doing very well.

They have also introduced Street chess which allows some children on the street to rather spend some time playing chess and they are enjoying it. I can see that the understanding of chess is gradually improving. It used to be very easy for me to win tournaments but currently, it’s not like that anymore. I meet young people every day who are also beating me. It shows that there is a lot of improvement going on. Right now for me to keep up my title, I have to train extra to win matches(laughs). There are lots of improvements and this is all due to all these activities going on. So, Ghana chess is doing well.

I think another factor for this improvement is Philip Ameku. He was appointed as the Zonal President. His impact is also contributing to making chess active in Ghana. I am very glad that the game is progressing in the country.

Moderator: At the moment you are Ghana’s only international master, how do you think Ghana can produce more titled chess players?

I.M Francis: Well, I guess if they are going to participate in more rated tournaments, there are chances that their ratings will improve and it will lead to them being titled players. Apart from this, taking part in international tournaments can help and also participating more in chess Olympiads. Maybe they should organize rated tournaments in the country and invite people from other countries, especially titled players to come and participate. That can also help some of them to get chess titles. So it has more to do with activities and events being organized.

Moderator: How can chess grow or get better in Ghana, where would you want to see more improvement generally?

I.M Francis: One major problem that Ghana chess is facing is the lack of sponsorship. This is where I would want to see improvement. If there are more sponsorship, obviously there would be more events. It is not easy getting sponsors because most organizations do not understand the game of chess and because of this, it takes time for organizations to consider sponsoring events and chess players. If sponsorship improves, it would help the chess growth in Ghana.

Moderator: What other chess activities are you involved in at the moment, What are your biggest chess aspirations?

I.M Francis: I am working on writing a chess book, which is not an easy task, but I am working on it. The book aims to look at the beauty of chess. I have been involved in chess for so many years and I think I have my understanding of the beauty of chess. So, the book will be about my understanding of chess. It will take me some time to finish it but I hope I will be done by the end of this year.

Apart from that, I am doing some personal coaching, online/offline. I am also involved in helping Togolese chess. Because I work in Togo, sometimes I help them organize chess events.

Moderator: You spoke about chess on the street, and chess in schools. Can you elaborate more on this?

I.M Francis: Okay. The Ghana Chess Association(some of them) volunteered to go out on the street, to some very populated places in Accra and then sat under tents on the street to play. What this did was that it drew the attention of the young ones on the street. It was then presented to them and those of them that showed interest were taught. So far they have improved a lot. That is how it started. However, in all of this, I think that follow up is important. Because once you start it, you need to follow up for it to stay active otherwise, it goes down. Also, the Association supplied interested people with chess sets so that they have the materials to play with among themselves. So far it’s been very positive.

Moderator: Speaking about chess in schools, is this an initiative that Ghana Chess Association is looking towards?

I.M Francis: Already, several schools are doing this. Occasionally we do chess competitions involving the schools, also we have some of our players assigned to particular schools where they go and coach interested students. And like I said before, the follow up is important so that it remains active and relevant.

Moderator: How has the COVID-19 Pandemic affected chess in Ghana?

I.M Francis: Currently, they have been a lot of events online. We are mainly using Lichess. We organize tournaments on Lichess which has been going on well.

Moderator: So far who has been your toughest opponent in chess?

I.M Francis: My toughest opponents to me have been Nigerians mostly. There are a number of them that I have tried to overcome on the board and it hasn’t been easy.

Moderator: Can you remember any names?

I.M Francis: Kigigha Bomo was a very tough opponent, I also remember playing with I.M Odion Aikhoje and I could not understand why I was losing. I also tried playing speed chess with him and he seems to be very fast in the game. There was also Theophilus Caiafas. Theophilus Caiafas used to be the president of the Nigerian Chess Federation. We played together in Dubai Olympiad, and there is also I.M Olape Bunmi who is also a tough opponent. I think there are several Nigerians whom i consider as tough opponents. I am not done with chess and I intent to overcome them(Laughs).

Moderator: How is life outside chess? What else do you enjoy doing, what other activities do you participate in?

I.M Francis: Well I play table tennis, I love reading and like I said, I am a chemistry teacher so I do research and teach chemistry. Outside chess, these are other activities I participate in.

Moderator: What advice would you give to aspiring players out there?

I.M Francis: Well I would say chess is a very interesting game and a mind sport that exercises your brain to be more active. You can also gain if you win tournaments, some prices go with it. But then, I would caution people to be aware that we are in Africa and because of this, chess is not something you can just rely on solely as a career. It is a good game to know, learn, and understand. But do not neglect other aspects of your life. The most important thing is to try to find a balance.

Moderator: Thank you so much for taking the time to have this interview with me. It was lovely having you here.