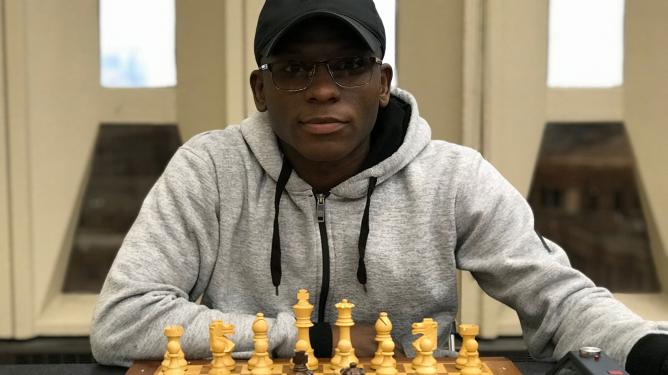 On this series of racism, GM Pontus Carlsson’s shares experiences of chess players around the world and asks what we as a community can do to address racism and inequality. Today, NM Daniel Jones shares his experience.

32-year-old Jones (@GodDanielX) is a well-known figure in the Chicago chess scene. Married with three children, Daniel runs Lion’s Paw Karate & Chess Academy, where he is both a martial arts and chess instructor.

“Competitive-wise, nation-wide there are not many academies that are superior,” Jones proudly remarks. “We have an advanced team; we travel from state to state, from Georgia to Florida to Minnesota, and we have great experiences. We’re a top-level company, especially without having large sponsors or organizations to fund our activities.”

They have a partnership with a school enrichment program in which the children are taught at the dojo. Jones also has private students that he teaches throughout the week, and when the situation around COVID-19 normalizes again, he intends to resume group lessons.

The chess component is separate, but some of the children are involved in both martial arts and chess. According to Jones, the combination works well.

“It balances itself out. In chess, you have the mental component, the calculations, the discipline, and in martial arts, you also have that underlying element of discipline, but it’s the physical side. A healthy body goes hand in hand with a healthy mind.”

He also relates that to himself: “I think that my personal development in chess comes as a result of the discipline that I had from martial arts as I was growing up.”

Chess in a McDonald’s

A national master since February, Jones learned to play chess when he was six when his father taught him. He plays about two tournaments a year and frequents a chess hub in Chicago that plays out of a local McDonald’s now that the Chicago Chess Club has ceased to exist.

By European standards, playing chess in a McDonald’s sounds odd. Jones explains that it’s not just the extra revenue for the franchise owner that makes sense: “It’s also the presence. There are several schools and libraries in the area so a lot of the youth come through. To see a bunch of black men playing chess, that’s a positive image that he wanted to support and give bidding for.”

To see a bunch of black men playing chess, that’s a positive image.

Although the south of the United States is typically perceived to have more issues with racism than the north, the city of Chicago is an exception to that rule, says Jones: “Revolutionaries and speakers, including Dr. King, have said that Chicago is one of the most segregated cities that they have visited.”

This translates into a chess community of mostly black people playing in the southern areas, and mostly Caucasians playing in the northern parts, with a small group of players willing to make the travel to the other side of the city to play in tournaments.

According to Jones, part of the institutionalized racism in chess, and the small number of black players managing to obtain an official chess title, is the result of the income differences between the different groups. He mentioned a report that argued that the median white family is worth $117,000 while the median black family holds $17,000 of wealth.

“The wealth gap that exists makes it really difficult for black players to get to a four- or five-day tournament for which they can call off work, and they have no other obligations,” said Jones. “So what happens is that a lot of players have the skills or the talent, but don’t have the ability to take three, four, or five days off. It makes it difficult for our demographic to become more part of chess tournaments.”

Tournaments in the U.S. are typically costly, with for instance a $300 entry fee and another $300-400 on hotel fees plus food and drinks.

“When we do play a tournament, it’s really a sacrifice,” he elaborates. “People are telling me: You should have been a master. But you have to play many tournaments for that, and I just don’t have the luxury.”

There’s not an easy solution. Jones suggests making it easier financially for talented players who have put in the work but cannot afford to participate in the tournaments necessary for their further development or obtaining titles:

“The only thing that I could think of that could make something like that easier is to take those who have put in a certain amount of work ethic and maybe help fund something like that. If they have to call off work and are missing a few days of pay, at least maybe the hotel or the arrangements could be offset or assisted on. I don’t know what that looks like, but offsetting costs would be amazing and lead to higher participation of black people in major tournaments.”

Jones also suggested a more practical way of getting more black people playing tournaments in the United States, which is to look more critically at the locations that are chosen. He points out that the annual Chicago Open, the most important tournament in the area, is usually held in Wheeling, a village 23 miles (37 km) northwest of downtown Chicago.

“When you have that distance from the areas that we frequent, which is predominantly the south side of Chicago all the way to Wheeling, probably a 50-55 minute drive depending on traffic, that knocks out a big chunk of those who would participate if they could. So location does play a key role.”

“I do understand the flip side of that, because business-wise being in these surrounding suburbs may be cost-effective,” Jones continues. “But it would help if they were able to organize it more centrally placed. The further you have it from the central radius, the smaller the chance that you get participation from us.”

The further you have it from the central radius, the smaller the chance that you get participation from us.

It’s not just the travel, according to Jones. “What is also part of our reality, and you can kind of see it in the news right now, is that when we go into these south suburban or west suburban type of communities, there is heavy racism when it comes to the police forces.”

Jones gives the example of Evergreen Park, a predominantly white community with a few black people spread throughout. To reach certain locations you might have to go through this village, which is not the most comfortable thing to do for black people.

Jones: “When you get a ticket for some minor traffic violation, and you’ll go to the courthouse, you’ll find that 95 percent of the people who are there are black, which is completely disproportionate to the population that exists in that community. As we pass through this community, we’re getting racially profiled and we’re getting pulled over for minor things. I actually circumvent that entire area, even if I have to go to something on the other side, because I’ve been into too many run-ins, too many minor traffic violations I wasn’t even guilty of, but somehow I ended up in a courthouse paying the ticket.”

The example might seem unrelated to the chess world, but Jones makes clear that such things indirectly hinder black players from playing.

“When you put tournaments in communities like that, that’s a factor that plays in our minds,” says Jones. “Is it worth the risk? Is it worth the travel? Losing the several days of revenue or paycheck, on top of the high hotel fees, and then also I’m gonna be bothered? There are just too many conflicting emotions. So we’ll say: you know what? I’ll just pass, maybe the next one, whatever.”

Jones gave another example of a year when he played the World Open in Philadelphia, and traveled there by bus with a group of friends and shared a hotel room.

“We got from the tournament late one night, and when it was time to eat, there was nothing available, it was in an off-beat suburb, we didn’t have a vehicle, so I was like: man, how do we even get food? Thankfully, after calling several different numbers, we were able to find a pizza place that was willing to deliver at that distance.

“Just placing the tournaments in better, more central location helps us out greatly as far as accommodation and bus travels and things like that are concerned.”

Jones’s profile picture on Chess.com is different from most others, as it shows that he is black. Some of the messages he received after beating players show some of the individual racism that can come through.

Jones says he receives such messages maybe once or twice a month. “Sometimes you get a couple of bad weeks back to back, and sometimes it’s months apart.”

Unlike Carlsson, who also talked about the negative messages he sometimes gets, Jones doesn’t report such messages but agreed that it’s probably the right thing to do.

“I probably should, to make it better. I’m just kind of desensitized to it; I’ve always been an individual that’s very self-confident so no matter what people are saying it doesn’t affect me very much. I just notice it as a reality.”

I’ve always been an individual that’s very self-confident so no matter what people are saying it doesn’t affect me very much. I just notice it as a reality.

Jones didn’t pinpoint clear cases of racism during over-the-board play but claims there are subtle cases.

“I can feel that they’re looking at me across the board, and that they actually feel superior, that this victory should be easy. A lot of times, I must admit, this works to my advantage.”