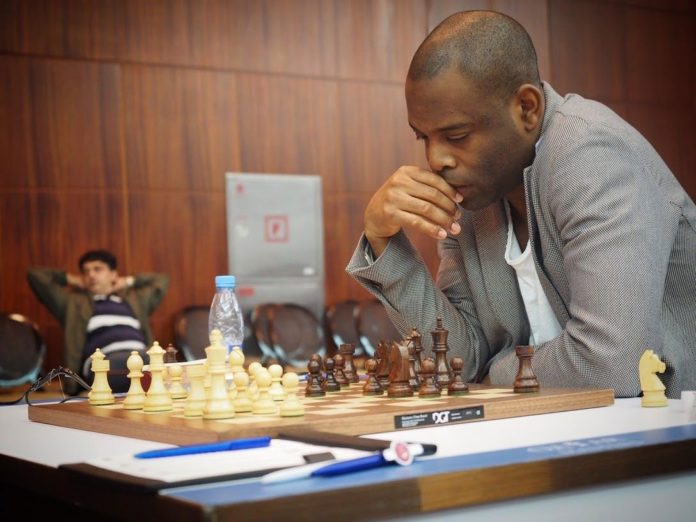 The death of George Floyd, followed by global protests, has moved the topic of racism to the front of public debate. Chess.com spoke to several chess players about their experiences with racism and will be releasing these conversations in the coming days. Today, GM Pontus Carlsson shares his perspective.

In March last year, GM Magnus Carlsen and GM Anish Giri joined forces in a video as part of a United Nations campaign against racism. They played a game of chess where, for once, Black made the first move.

Obviously this was a symbolic move to help people see things from a different perspective.

“This rule was never about race or politics, but we can break it to send a message to everyone who believes that color should grant advantage in chess or in life,” was how Carlsen put it.

“It is difficult to change your mindset in a chess game with a different start. But if we can change our minds in the game, we can surely help people change their minds in real life,” said Giri.

The Chess.com news report about the video has collected a total of 662 comments as of today. They showed how many people care about the topic and also how sensitive it is.

The most striking comments were the ones that suggested Carlsen and Giri were talking about a problem that does not exist or is not important. “Frankly, with all the real problems in the world, I find it irritating that people try to find ones where they don’t exist,” wrote one member.

It has become (even more!) clear in the past few weeks that systemic racism does exist, manifesting itself in different forms, and not just in the United States. When asked about the protests in the U.S., Prime Ministers Justin Trudeau (Canada) and Mark Rutte (Netherlands) immediately admitted the problem exists in their country as well.

37-year-old Carlsson is one of the few black grandmasters in the world. (The most famous one is GM Maurice Ashley, who cares a lot about the topic but refrained from commenting.)

Carlsson was born in Cali, Colombia. At the age of one, he lost his entire family and was adopted by Swedish parents. His stepfather, Ingvar Carlsson, is a former chairman of the Swedish Chess Federation.

Carlsson’s experiences with racism go back to his school days as a young teenager when he came across textbooks used in class, for instance about the history of slavery, using the n-word. He had to read the text out loud, but he refused to do so.

“Nobody cared,” Carlsson says. “It can be very tough, but if you survive it then you become mentally strong and put it into positive things.”

“It can be very tough, but if you survive it then you become mentally strong and put it into positive things.”

Living in Linköping with his adoption family, Carlsson started traveling internationally to chess tournaments on his own in his teenage years. He has encountered many unpleasant situations during those travels.

“At every border control, I was attacked. They were harassing me, using the n-word, or “monkey,” and because I also have a Colombian passport, they were accusing me of drug dealing.”

One time, he played two back-to-back tournaments in Bulgaria and Spain. He had a one-day stop-over in Germany, where he was taken into custody at the airport.

“Of course, it was for nothing but racial profiling,” says Carlsson. “When I arrived at the police station and all the other travelers were black, I knew what was going on. The whole process took three hours, and I missed my connecting flight.”

With a calm, almost indifferent sounding voice that revealed the frequency at which such things happened to him, Carlsson described the episode as mildly as “very annoying.”

‘The chess world has been a vacation’

According to Carlsson, the chess world is much less racist than the outside world, saying: “The chess world has been a vacation from the real world.” He does have examples, such as a period in the 1990s when some of his opponents would follow a general trend of wearing T-shirts with the text 100 percent Swedish.

“I would usually win those games in under 25 moves because I was so angry,” Carlsson said.

Carlsson also recalled experiences where, at international youth tournaments, players would make fun of his appearance, or, after he had won a rapid tournament, people made remarks behind his back such as “who knew a monkey could win this.”

In 2017, Carlsson received an email from the manager of his chess club in Sweden that was sent to the team and its sponsors. The manager used n-words and quoted, “Ten Little Niggers,” the original title of the 1939 Agatha Christie book, “And Then There Were None.”

Carlsson terminated his membership in the club and reported the incident to the Swedish Chess Federation. Although the federation stated that it was racist and unacceptable behavior, Carlsson said that the team manager was not penalized.

Carlsson says he sometimes gets racist comments on Chess.com, but he suspects that it’s much less common for him than for other black players because he is a grandmaster. “The stronger you get, it helps. People are quite used to losing against grandmasters.”

He says it’s easy to report such comments on Chess.com and praised the site for being quick in banning racist accounts.

Carlsson also points out that people like Ashley and himself feature on white supremacy forums. “They are upset because we destroyed their thesis that black people are stupid.”

“They are upset because we destroyed their thesis that black people are stupid.”

It was earlier this week that Carlsson faced plain denial of systemic racism from the well-known Israeli grandmaster Boris Avrukh, who moved to the U.S. a few years ago and now lives in Rolling Meadows, Illinois. He is mostly known for his opening books for Quality Chess.

A comment by Avrukh responding to Carlsson on Facebook raised many eyebrows and was shared and discussed outside the platform. Avrukh wrote:

“I want to hear from you one example of systematic racism, but you should find better sources than CNN trash. Yes, I do think Black people have equal rights and even more than equal rights.”

One person who commented was WIM Sabrina Chevannes, who has a diverse background, being half Chinese, half Jamaican:

“Pontus, I can’t even begin to describe how I feel now. One thing is for sure, I’m never buying a book by Avrukh again. In fact, they’re not even worth using as toilet roll. May just have a bonfire later…”

Every person in his series is asked what they see as a possible solution, something that can be done against racism in the chess world or beyond it. Carlsson:

“Be honest to yourself. Accept there is a problem, and make sure you listen to each other. Don’t change the topic because it makes you feel uncomfortable. It’s OK to feel uncomfortable. Discuss it. It has to be a conversation, not a monologue. Talk to a black friend. Openly. Don’t be afraid to speak out. And don’t believe it only exists in the U.S.”

In the summer of 2017, Carlsson was in the Czech Republic to play in the Pardubice tournament. On the first day, when he walked towards the playing hall, a young and talented black player was also with him. At some point, local people started to make monkey sounds.

“This was his first encounter with the real world,” Carlsson says. “What am I supposed to say? Should I tell him to prepare for this, that this is how it’s going to be for the rest of his life? Or should I have him keep his young, naive brain with his positive attitude?”

“This is one thing I haven’t learned yet,” Carlsson says, “how to deal with future generations. I really hope that what you see now in the world, can lead to better conditions and more equal rights for black people. If that happens, I can just tell him: Keep fighting and things will get better.”