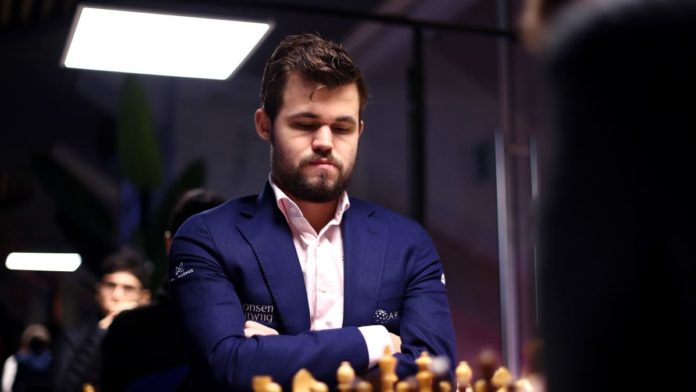 Greatness cannot be achieved without sacrifice. While it is the fire that burns inside that fuels the brilliance, the pursuit for perfection can also torment, turning relationships to ashes and niggling at the soul. The gifted can be loved and disliked. They can achieve immortality but still, be flawed.

They are, after all, human. But, ultimately, their extraordinary talent overshadows everything. As Michael Jordan says in ‘The Last Dance,’ the wildly popular 10-part docuseries covering the 1997-98 Chicago Bulls season: “Winning has a price and leadership has a price.”Magnus Carlsen had just been introduced to chess by his father, Henrik when Jordan was securing his first hat trick of NBA championships with the Bulls in the early 1990s.

Still progressing through elementary school, and some years away from being described as the “Mozart of Chess” by the Washington Post, the young Carlsen never watched Jordan’s games but, nevertheless, collected NBA cards. “Everybody knew who Jordan was,” Carlsen tells CNN Sport.

Like millions around the world, Carlsen has been captivated by ‘The Last Dance,’ which gives a courtside seat into what it took for Jordan to become the ultimate champion. Winner of six NBA championships and five MVPs, the American superstar who became a cultural icon had time for one thing: winning.In the retelling of Jordan’s tumultuous final season with the Bulls and the dynasty he helped build, the audience is saddled with conflicting emotions.

While his talent is awe-inspiring, his force of personality enthralling, some of the methods used to achieve excellence on the hardwood — berating teammates, even punching one in the face — can rankle, raising an internal monologue of questions during what is a sensationally good sports film. But few watching what is reportedly the most in-demand documentary in the world can relate to Jordan, except for perhaps Carlsen, himself a master of his chosen craft, a once-in-a-generation talent who is relentlessly great at his sport.

“There have been people saying in Norway ‘you don’t have to be an a***hole to win;’ whenever they say that from now on I’ll say ‘go and watch Jordan’ and I’m going to use it as an excuse for any questionable behavior,” Carlsen says, a wry smile engulfing his face as he speaks from his Oslo home.”I’m certainly somebody who is very much in that school. There are no excuses. You always have to be the best, nothing else is acceptable.”

Carlsen has been the world chess champion since 2013. Aged two he was solving 50-piece jigsaw puzzles. By five he was building magnificent creations from Lego. At 13, he beat former world champion Anatoli Karpov, drew with Russian great Garry Kasparov and became a chess grandmaster.Six years later, he was the youngest chess player in history to top the world rankings. His rise was dazzling and, over the last decade, the prodigy has become one of the best there has ever been: four world titles and the highest-rated player in history. 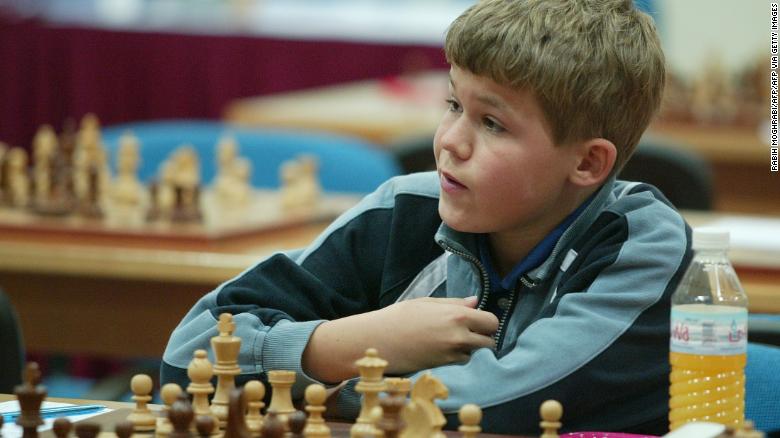 Carlsen participating in the Dubai Open chess tournament in 2004, aged 13.

So, is ruthlessness, that needs to win come what may, an essential trait in an all-time great? “I think you need it,” Carlsen answers, after a moment’s reflection. Much like Jordan, it is a loathing for losing that powers Carlsen’s merciless drive. The infrequency of the defeats does not soften the blow.

In last month’s Magnus Carlsen Invitational, an online tournament with a record total prize fund of $250,000, he lost to 16-year-old rising star Alireza Firouzja. “It pi**ed me off a lot,” admits Carlsen.And on his way to beating Ding Liren, he turned the air blue as his frustrations boiled over. He is, he says, “more human than most.”

“When I blundered in one game there’d be a bunch of expletives coming from my mouth; I think that’s a good thing,” Carlsen says, believing that a player’s freedom to be expressive makes rapidplay online chess, games which are normally completed in under an hour, more appealing to the many than the classical format.”It’s real. People have these instant reactions, which you cannot actually have when you’re at the board,” he says. “There must be room to be yourself and I’m a super competitive person, and when I mess up in a way I shouldn’t, that bites at me and there’s really nothing wrong with expressing that.

It’s just part of who I am.”You can like it, or you don’t like it. It’s authentic and that’s the most important thing.”People have been saying that’s a good and bad thing about me. My emotions are usually outside my body. That’s not what you usually connect to a chess player in general, but that’s the way that I am.” 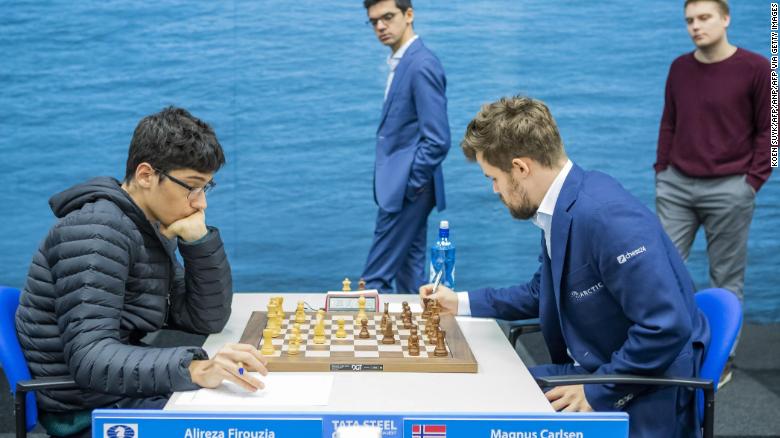 Firouzja (L) against Carlsen during the ninth round of the Tata Steel Chess Tournament in Wijk aan Zee, the Netherlands.In 2010, Kasparov — the world chess champion from 1985 to 2000 who was once Carlsen’s coach — told Time magazine: “Before he is done, Carlsen will have changed our ancient game considerably.”Still in his 20s, Carlsen’s impact on the game has been sizable, leading to modeling assignments with G-star, a deal with Porsche and his own app.

All have contributed to his multi-million-dollar fortune. For half his life, the Norwegian has been accustomed to traveling the world for around 200 days a year, so these last few months in Oslo are the longest he has spent at home since childhood. And while Carlsen’s daily life during the global pandemic has not changed significantly — “I play chess for a living,” he says all furrow-browed — it has given him the opportunity to pause, and the consequence of that may indeed lead to a shake-up of the ancient game.

The pandemic has provided Carlsen with the opportunity to put into practice his vision of making chess more interesting to the masses, in a time when the sport has stalled and most of the world is dealing with devastation and unpredictability.

Earlier this month, he launched The Carlsen Tour, a $1 million series of online tournaments in which he will compete, providing hours of entertainment for chess fans until August. The first event was the Carlsen Invitational, a final reportedly watched by an online audience calculated at over 115,000, and the second the Lindores Abbey Challenge, which is happening now.

His aim, Carlsen says, is to “ensure chess players can have a livelihood,” while also giving chess fans “something to look forward to.”He would be surprised, he says, were he to play over-the-board chess this year. “I suspect next year there will be some sort of return to normality, but who knows, I’m not banking on it,” says Carlsen.

Perhaps it will come as no surprise to hear him call his eponymous 16-day online tournament, which involved eight top-ranked players, as an “instant hit,” but he has not been the only one to praise the format. Earlier this month UK newspaper, The Guardian, wrote that the tournament “proved a revelation,” magnifying mistakes and intensifying the pressure. It is also significant that the Norwegian describes his win over Hikaru Nakamara, the world’s top-rated blitz player, in the final as his most satisfying victory for a while. 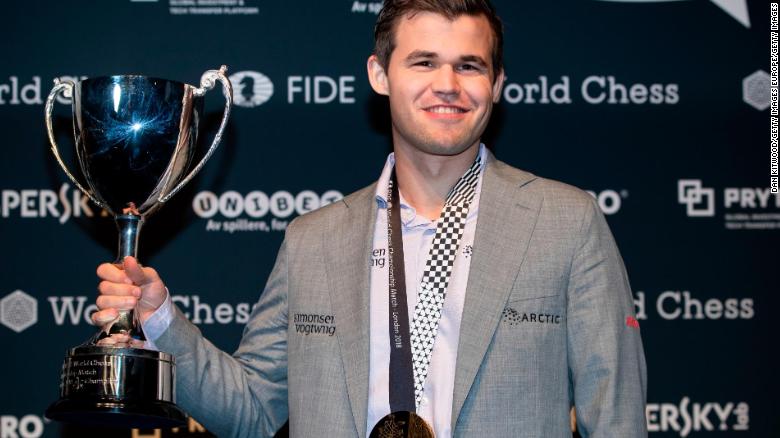 Carlsen holds his trophy up after beating Fabiano Caruana to regain his World Chess Championship title on November 28, 2018 in London.

“It was really hard,” he explains. “The final two matches were both really close and I felt I was challenged in a way I haven’t been too often in rapid and blitz chess.”We can take from [the Invitational] two things, both that fast time control and the match format, that it’s this one-on-one combat, [and] both of them worked pretty well.

“The first couple of days took some getting used to but after that, I was fully focused and there were no worries and, also, for most of the time I had the thumbnail video of my opponent in the corner of the screen so I could see my opponent and see their facial expressions, so that made it more real.”You can actually see some of what they’re thinking and that’s also something that people appreciate while watching.

“Ending two days before the start of the Online Nations Cup, a competition run by governing body FIDE which Carlsen did not participate in, the timing of the Invitational raised some eyebrows. In interviews last month, Carlsen said there were no issues between himself and FIDE.

Carlsen describes himself as a “sports nut” and says he has missed not being able to watch live football these last few months. Following his 2018 world title win over Fabio Caruana, Carlsen told the assembled media in London that had he lost he would probably never play a world championship match again. Had he bowed out, the impact on the world of chess would have been akin to Jordan abruptly retiring from basketball while in his prime nearly three decades ago. But now there is no talk from Carlsen of prematurely quitting any format of the sport. For as long as his computerized brain allows him to flatten opponents, he will continue to set the standard.

“I just enjoy the game so much,” he says. “[I] enjoy winning every time, hate losing every time that happens. I’m eager to keep going.”There are moments when I’m thinking, ‘I’ve done this before, why am I doing it again’ but they are few and far between and that doesn’t happen much at all.

“I feel like my top level is still the very best in the world. The fact that I’m vulnerable on my bad days speaks to how good the others have become.”I’m just motivated and love to play the game. As long as I feel like I’m still top of my game and I continue to win, I don’t see one reason to quit.”