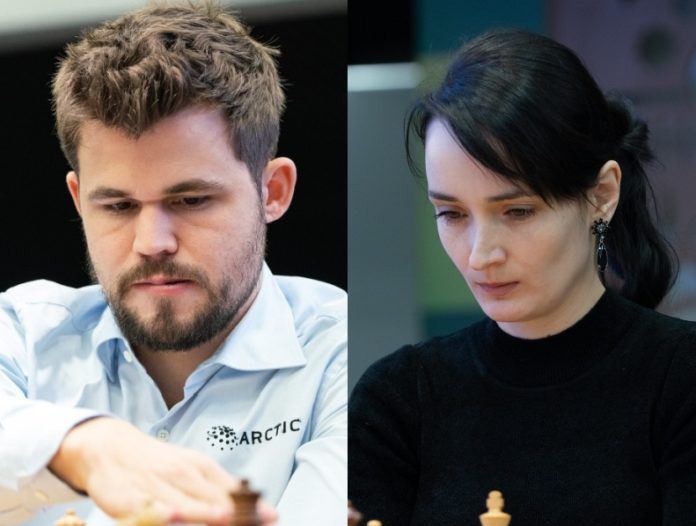 The FIDE Online Steinitz Memorial tournament which was held over the weekend, was won by the two reigning world blitz champions. Magnus Carlsen won the men’s event with a round to spare while the women’s section was won by Kateryna Lagno.

Magnus Carlsen brought the FIDE Online Steinitz Memorial to a fitting end with a crushing win in the inaugural event held to honor his predecessor. The 16th World Champion’s performance echoed the dominance of the first undisputed king of chess, Austrian great Wilhelm Steinitz, as he waltzed to victory.

Carlsen had led the field after the first day’s play but was overtaken yesterday by Russia’s former World Champion in rapid Daniil Dubov. However, the young pretender’s challenge quickly fizzled out today as he lost three straight games against fellow Russian Alexander Grischuk, China’s Bu Xiangzhi and the American teenager Jeffery Xiong.

In the Bu game, in particular, the under-pressure Dubov played a shocker. IM Lawrence Trent, while commentating, likened Dubov’s dramatic slump to an “English batting collapse” – a phenomenon well known to cricket fans.

Meanwhile, Carlsen benefitted from another shocker played by Grischuk in Round 15. In the chess24 commentary box, GM Peter Leko was absolutely brutal in his assessment of the out-of-form Grischuk’s play. “This is unbelievable,” he said. “Black is absolutely toast!”

Carlsen was cruising ahead on 10/15 while Dubov fell back to second on 9/15. Yet in Round 17, Dubov had one last chance to get back in it as he faced the tournament leader. Dubov had to win and win again in Round 18, while Carlsen had to lose both, which was highly unlikely. Carlsen duly closed out the draw to secure the title with a round to spare.

The champion was downbeat in his interview after the match and typically hard on his own play. He said: “I was terrible from start to finish. The result is OK, so I move on.”

FIDE President Arkady Dvorkovich paid tribute to the quality of play and the consistency of the top players. “No matter whether it’s online or offline the same guys win the tournaments,” he said.

Lagno clinches the title in a thrilling tiebreak against Lei Tingjie

Kateryna Lagno won a bizarre Armageddon tiebreak to secure first place in the inaugural FIDE Online Steinitz Memorial’s Women’s Section today. The Russian kept her cool as her play-off with Lei Tingjie went to a marathon 152 moves. The Chinese player, playing with White and needing to win, tried to flag her on time.

Sunday’s final 6 rounds were full of drama as momentum swung back-and-forth before the focused Lagno eventually came out on top. Earlier Tingjie came from under the radar to draw level with Lagno at the end of 18 rounds of blitz. It followed a stunning charge from Zhansaya Abdumalik who, at one point, was on seven straight games and in the lead. The Kazakhstani’s momentum appeared unstoppable until Tingjie spoiled her run by holding her to a draw.

With Tan Zhongyi and Lagno’s fellow Russian Alexandra Kosteniuk also in the mix, it looked like the tournament was wide open. Then Tingjie took up the mantle winning her final two games to finish the day’s blitz unbeaten on 5/6. Meanwhile, Lagno, the pre-tournament favorite, and overnight leader started with a loss and it took a “lucky” win on game 14 to spark her into life. Lagno then followed it up with a smooth win over Marie Sebag to wrest back the lead. Tingjie ended Kosteniuk’s hopes while in the 17th Abdumalik lost to Tan Zhongyi.

By the final round, it was incredibly tight at the top with Lagno just ahead in a three-horse race. All eyes were on Abdumalik vs Lagno with Abdumalik needing a win. But in a tense encounter Lagno held the draw and Abdumalik was squeezed out. Tingjie, meanwhile, beat Elisabeth Paehtz to go into the tiebreak which Lagno eventually won.