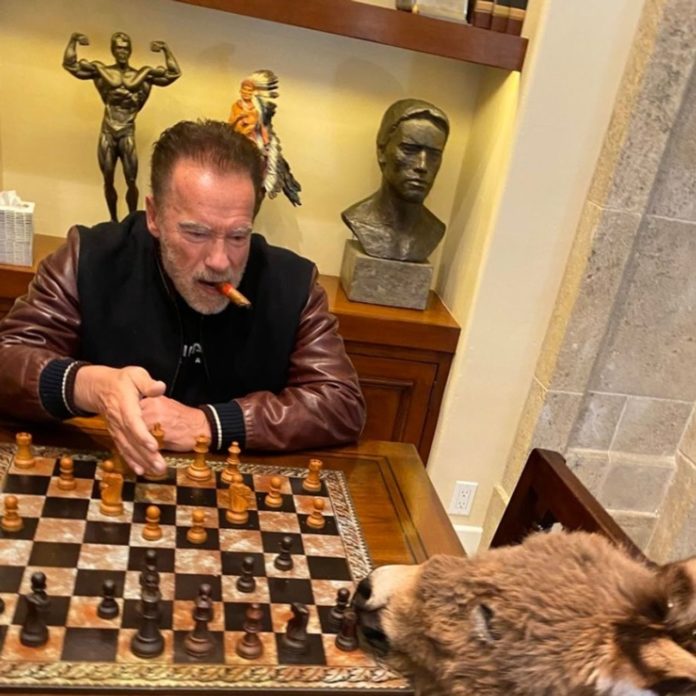 Ever since he started sheltering in place, Arnold Schwarzenegger has received several threatening phone calls a day. The most menacing comes from a burly man who rings late at night from Budapest. “You want a quick beating?” the voice asks.

Schwarzenegger is unfazed. He says he’ll be back—to beat his distant opponent, an old friend, at online chess.

“I, of course, do that religiously now,” Schwarzenegger, wearing a “Terminator” T-shirt during a video call, said of his online chess habit.

This is how the former governor of California is spending quarantine. And he isn’t alone. His pandemic chess habit is shared by a growing crowd, including reigning NBA MVP Giannis Antetokounmpo, presidential candidate Joe Biden and the manager of FC Barcelona.

When the world told them to stay home, they became part of the global pandemic’s most surprising counterattack: a modern chess boom. Everyone’s newest form of entertainment is one of the world’s oldest games.

With sports off the air since March, the world’s best grandmasters have broken centuries of convention by cooking up high-stakes tournaments over the internet. The world’s worst pawn pushers have nothing better to do than hone their middle games—or just learn the basics.

During this brief period of time, organizers have developed complex systems to host lucrative events—while accounting for potential cheaters—and feed the content-starved masses flocking to the game in unprecedented numbers.

The number of games finished per day on Chess.comrapidly increased as the U.S. and other parts of the world shut down.

Chess.com hosted almost 204 million games in February alone. By April, that number had surged to more than 279 million for an average of 9.3 million games a day.

Even wilder was the spike in other activity on the site. The number of messages between users shot up by 136% over those two months. Aficionados tuned in just to watch—and not even play—more than 10 million games in April, a jump of 97% from February. It’s impossible to say whether that correlated with people running out of Netflix options.

The Chess.com spike happened, quite literally, overnight. The sharpest increases began right after March 11, the same day the NBA announced the suspension of its season. As more populous countries like India issued shelter-in-place orders, demand only grew. The eggheads who run the world’s most popular chess website were frantically making sure their servers could handle this army of wannabe Kasparovs.

“All of us were holding on like the Millennium Falcon before it crashes,” said Rensch.

The irony is that while amateurs were concocting new usernames to play online—we’re looking at you, “CovidChesser”—the pros were trying to finish a real-live tournament in near isolation, barricaded in a hotel on the edge of Siberia playing to qualify for the world championship. Only Russia closing its airspace stopped them.

That’s when chess elites realized they could have the only major sporting event happening in cyberspace.

Carlsen’s camp assembled a field of eight top players for the $250,000 Magnus Carlsen Invitational. The only other time in the history of the game that such a prestigious event had been held remotely came in 1965 when Bobby Fischer played a tournament in Cuba from the Marshall Chess Club in Manhattan. Only this time, they wouldn’t need a Telex machine.

“The technology was there. The players were there. For chess, it was a little bit of a perfect storm,” said Andreas Thome, the chief executive of PlayMagnus, which organized the Magnus Carlsen Invitational.

In Carlsen’s home country of Norway, the tournament aired on national television. In Spain, it was carried by LaLigaTV, normally the home of soccer giants Real Madrid and Barcelona. Thome estimated their total audience at more than 10 million.

The pivot to digital presented a rare opportunity to loosen up some of chess’s more staid habits. Grandmaster Hikaru Nakamura played in business casual instead of a suit. The Netherlands’ Anish Giri followed one win with a shushing-his-critics soccer celebration. Fabiano Caruana, the world’s No. 2 player, experimented with growing a mustache.

Carlsen could never be certain that all of his opponents were even wearing pants.

“Dress code, and what is seen and not seen on the webcams, makes me think of the chess phrase: The threat is stronger than the execution!” the highest-rated chess player ever wrote in an email.

Chess has been available to play online for practically as long as the internet has existed, but the game’s governing bodies had always insisted on conducting tournaments in person for one specific reason: cheating. Organizers of the Carlsen Invitational positioned cameras behind every player to monitor their screens and make sure they weren’t consulting chess engines.

The Online Nations Cup is relying on algorithms developed by Chess.com that track abnormal moves. In March alone, the website’s systems reviewed more than 90 million games for potential foul play. Among the offenders were three grandmasters.

“Chess is tough, it takes skill,” he wrote. “You can’t just be 7 feet and dunk over everybody.”

Schwarzenegger is a little more experienced than Antetokounmpo—his half-century of chess has included games on Venice’s Muscle Beach, on movie sets, and in his after-school programs where kids as young as 6 years old have beaten him. (“The kids love that they terminated ‘The Terminator,’ ” Schwarzenegger says.) But not all of his opponents seem to be taking it very seriously. Schwarzenegger recently shared a picture of himself chewing a cigar and matching wits with a friend named Lulu, who was resting her head on the board. Lulu is his pet donkey.

“She’s not the best chess partner but she’s getting there,” Schwarzenegger wrote.

Schwarzenegger has faced tougher players in the past, as one Twitter user reminded him with a photo from their game in 2002. That user was Garry Kasparov.

Chess has also proven a welcome distraction for those used to frequent tactical geniuses instead of donkeys. Now that he can’t deploy his usual Lionel Messi Gambit, Barcelona manager Quique Setien has returned to his first love: speed chess.

“There was a moment when I had to leave chess to one side as it was taking up too much of my time to the detriment of football, which was my job,” Setien, who is a highly rated chess player, wrote in an email. With La Liga barely returning to practice, that moment is not now.

Even political chess has evolved into discussions of actual chess. When Bernie Sanders endorsed Biden in a live stream last month, they chopped it up over the Democratic nomination and vital policy questions. Then they really got down to business.

“I thought we’d play some chess, what do you think?” Sanders offered with a board in the background.

“I’d like to play chess,” Biden replied. “I’ve been playing on my cellphone—that’s about it.”