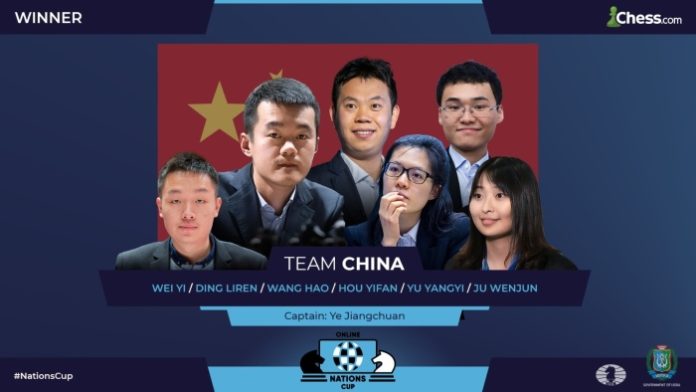 China held the USA to a 2-2 draw in the superfinal match, a result that was enough to secure the title thanks to its superior performance in the round-robin stage: having won the first part of the competition by a four points margin, China had draw odds in its favor.

Team USA was forced to win the match, but after Hikaru Nakamura drew against Ding Liren, Yu Yangyi scored the decisive victory by beating Wesley So in a very impressive style. Irina Krush, playing with the white pieces, was never in trouble against the world’s best woman chess player Hou Yifan, but she didn’t have the chance to press for a victory either. Fabiano Caruana scored the only victory for team USA, but by the time he finished his game the title had already been decided in China’s favor.

Yu Yangyi, China’s third board, turned in a very strong performance, scoring a total of 7½ points out of 10 games (six victories, three draws, one loss). However, the symbolic “most valuable player” title goes to Fabiano Caruana of the USA. Playing on board two, Caruana went through the event undefeated and scored six wins and three draws.

The tournament took place May 5-10, 2020. The group stage run May 5-9, with two rounds per day, while the Superfinal was played today, May 10. The event was broadcast live across multiple outlets including FIDE’s and Chess.com’s own channels across Twitch, YouTube, Mixer, Twitter, and other international streaming platforms. With an estimated audience of several million worldwide, commentary by chess experts was conducted in multiple languages, including English, Spanish, Russian, Mandarin, French, German, Portuguese, Italian, Turkish and Polish.