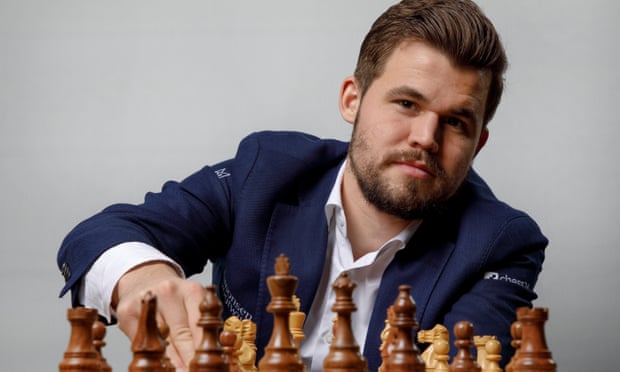 In a parallel universe, middle-aged men with middle-aged bellies are still frothing over Arsenal’s controversial Premier League winner against Liverpool. Saracens have somehow snuck into another Champions Cup final. And Pinatubo, or “Pina-turbo” as the tabloids are calling him, has just been christened the greatest horse since Frankel after his 2,000 Guineas triumph.

In the real world, meanwhile, the biggest and richest sporting event over the weekend – with all due respect to Belarus’s premier league – took place on the internet in a chess match dubbed el clásico.

On one side of the virtual board sat the Norwegian world champion, Magnus Carlsen, who had created a $250,000 online tournament which also carried his name, the Magnus Carlsen Invitational. Facing him was the American Hikaru Nakamura, the world’s top-rated blitz player, who once likened his opponent to Sauron, the dark ruler of Mordor in the Lord of the Rings. The pair, unsurprisingly, do not exchange Christmas cards.

The action was fast, frenetic, and tense. When Carlsen defended his world title against Fabiano Caruana in London in 2018, each tussle lasted up to seven hours. But in rapidplay games are done and dusted in under an hour. The format has proved a revelation: pressure is intensified, mistakes magnified. Often the computer evaluation resembles cardiac oscillations, swinging wildly from one side to the other. Never has chess looked more like an adrenaline sport. No wonder Nakamura was once sponsored by Red Bull.

It took a fortnight for eight players to be whittled down to two for Sunday’s final. But the sober conventions of normal chess – polite handshakes and poker-faced silence – were discarded far more quickly. During his semi-final against the Chinese player Ding Liren, Carlsen swore and scowled after blundering into checkmate – but less than an hour later he was doing double fist‑pumps after coming back to win the next game.

“I haven’t felt this kind of tension in a long while,” he admitted after his victory in the series. “It is not pleasant for the players at all.”

The final was just as tense and Carlsen was understandably shattered after holding off Nakamura to win a seesawing thriller to claim the $70,000 first prize – a decent return for a few hours’ work by anyone’s standards. But there was another silent battle raging behind the scenes: the one for hearts and minds. According to the organizer chess24.com, more than 10 million people have watched the tournament. Meanwhile, its biggest rival, chess.com, has in excess of 35 million members who play more than five million games a day. Another popular website, lichess.org, has around 60,000 people playing at any given time.

These are serious numbers and for all three the lockdown represents a once-in-a-generation opportunity – alongside the cold war by proxy contest between Bobby Fischer and Boris Spassky in 1972 and Nigel Short’s doomed attempt to wrest the title from Garry Kasparov in 1993 – for chess to lurch towards the mainstream.

It helps that the commentary has been so punchy. One Carlsen blunder was described as “a howler of unbelievable proportions” by the Russian grandmaster Peter Svidler – a comment matched by the English international master Lawrence Trent, who suggested Ding might be a “choker”. On the Spanish broadcast, meanwhile, Pepe Cuenca’s machine-gun delivery made every stunning combination sound like a Lionel Messi golazo.

Things have, it is fair to say, moved on from the coverage of Kasparov v Short. Writing in the New Yorker, Julian Barnes noted that one TV analyst, the grandmaster Raymond Keene, is “nicknamed the penguin for his well-lunched stomach and rather Antarctic set of his head on his shoulders”, while the much-loved grandmaster Jon Speelman was described as “the ultimate boffin, a sports marketer’s worst nightmare” and “an emblematic bar to the populariser’s dreams”. “For all his great savvy on the board and the affectionate respect in which he is held,” Barnes concluded, “Speelman is never going to be the [Andre] Agassi of the 64 squares.”

Carlsen has been the Federer, Djokovic and Nadal of chess since becoming world No 1 in 2010. Even now he is the game’s great white shark, with an unnerving ability to detect weaknesses. There was relish, too, when he admitted he had “wanted to crush” the 16-year‑old prodigy Alireza Firouzja in the preliminary rounds.

But, impressively, Carlsen has been brutally honest about his failings, too. On one occasion he described his play as “terribly bad”. On another, he admitted: “I got away with something akin to murder.” In a world where big-name sportspeople rarely stray from the anodyne or the bland, the Norwegian has been a revelation.

And that is not the only preconception he has shattered. Martin Amis once wrote that chess genius lives, or windmills its arm, on the outer rims of sanity. Inevitably, he invoked Fischer’s descent into madness. The American, who used to get a discount at his local antisemitic bookstore so valued was his custom, was also so paranoid he had his fillings removed because he did not want anything metallic in his head in case he picked up radio transmissions.

But the more we see chess players up close, the more it is obvious Fischer was a gargantuan outlier. Over the course of the past fortnight, the world’s best has never seemed more human. Including Carlsen himself.