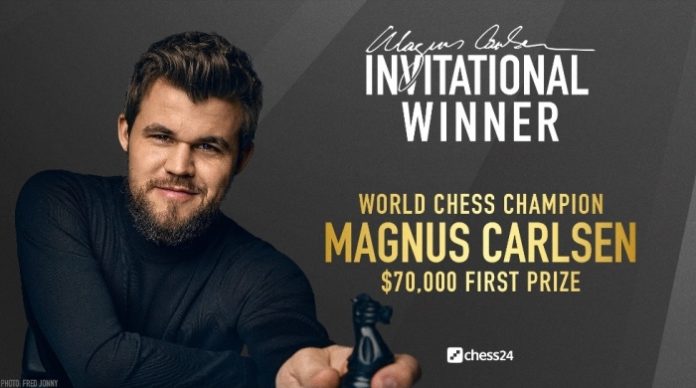 In April 2020, the world chess champion, Magnus Carlsen staged the richest online tournament in history where seven other top players joined him in battling for a $250,000 (£200,000) prize fund, with the winner guaranteed $70,000. The tournament started on the 18th of April and ended on the 2nd of May 2020.

Magnus Carlsen has won the tournament with his name on it after winning a thrilling final match against Hikaru Nakamura 2.5:1.5. It was vintage Magnus in Game 1 as the World Chess Champion ground down Nakamura in a drawish endgame, while Game 3 was a positional masterpiece. Sandwiched between, however, was an equally impressive technical win by Hikaru Nakamura. The US star almost repeated that feat in the final game, but Magnus held him to a draw to claim the $70,000 top prize. “Happy to have pulled through!” he said.

In the first game, Hikaru was playing confidently with Black and seemed to go on to solve most of his problems, but as so often in games between these two players, the pressure applied by Magnus eventually told. His h-pawn proved too strong in the ending – Nakamura resigned on move 84.

In Game 2 Magnus accepted a big space disadvantage after playing the Queen’s Gambit Declined and then went for premature simplifications, met with instant disapproval from the commentators. Here is a position after 30.Qa3! (a move Carlsen actually missed)

Black is paralyzed with the white queen ready to punish any attempts by Black to become active, and after 30…Kg7 31.Nde5 Bxe5 32.fxe5 Hikaru went on to get sweet revenge, winning a technical ending every bit as impressively as Magnus had the game before (the World Champion also had one or two chances to save himself, with e.g. 36…gxf5!).

That was a tough blow for Magnus, but it helped to get over it that in the next game he blitzed out 11 moves of theory until 11.Ng5, which had given Radek Wojtaszek an excellent position against Dmitry Andreikin in 2019 Jerusalem Grand Prix. Hikaru sank into a 3 minutes 33 seconds think, and when he continued, his first new move 13…Qe7!? seemed a dubious one. Magnus had the advantage and seized the chance to exchange down into an endgame, as he’d seen the crucial follow-up 25.Bd6-b4!, a move that gained high praise from Alexander Grischuk.

This was one position where the rook and a pawn were better than two minor pieces, with the white kingside pawn majority ready to advance. Hikaru tried to stop that with the radical 28…g5?!, but only created more weaknesses, and it was very much a case of Magnus doing what he does best. The World Champion converted his advantage creating a positional masterpiece.

In a game Magnus only needed a draw, he played the Cambridge Springs Defense, and on move 16 he found a break that surprised the commentators but seemed to be the perfect drawing mechanism. However, ten moves down the road Carlsen made a serious inaccuracy 26…Ke8?

It was far from easy for White, however, because if Hikaru exchanges minor pieces, as he eventually did, it only leads to a drawn rook endgame. Magnus was eventually able to draw by repetition and won the final.

Hikaru Nakamura had pushed Magnus all the way and took home the $45,000 second prize:

When asked to rank winning this event among his other achievements, Magnus summed it up:

“It’s a big deal. Obviously, it would have been a disappointment if I hadn’t, I’m not going to lie, but yeah, I’m really, really happy both to beat Hikaru today but especially to have gotten through against Ding. I never felt like I really got in full gear in this tournament and I’m just so happy that I managed to pull through. I don’t know how it ranks. Certainly, it’s one of a kind so far, so that’s I suppose a very good thing.”

The full breakdown of the prizes for the Magnus Carlsen Invitational was as follows: