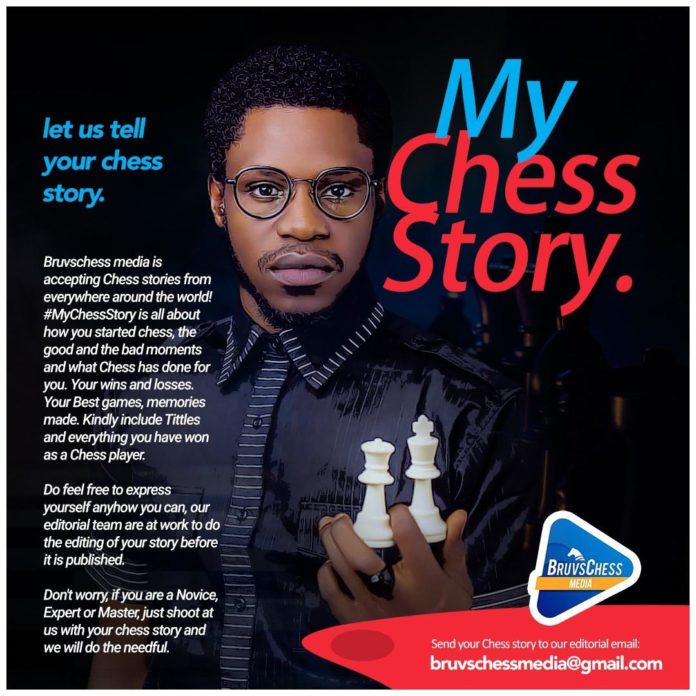 My name is Elochukwu Fame Ezeumeanya, from Abuja, Nigeria, and this is #MyChessStory.

“I don’t want to see anybody outside. Nobody should come close to that TV let alone touching it, eat and read your books, I will ask you questions when I come back.” That’s how my Mum would always warn my Siblings and I before she goes out. This is how we spend our holidays and every other day as kids. You can describe us as “Indoor kids”

One day, my eldest brother came home with many indoor games which include; Whot, Ludo, Spades, Draft, and Chess! to keep us occupied. That was how I got introduced to Chess as a Primary school Pupil. In primary six, I lost interest in chess because all the indoor games were seized by mummy and were replaced with large Textbooks, workbooks, and Past Questions for our Common Entrance examination. Thanks to her, we made it!

I regained interest in Chess again as an undergraduate studying History and International Relations at Nnamdi Azikiwe University, Anambra State Nigeria. During one of my history lectures on the Medieval Period, my lecturer at that time taught ancient royal games and mentioned chess! Unfortunately, at that time, I had forgotten how to play chess.

I tried re-learning by finding someone who could play and to my surprise, not one person in a class of 150 students could play chess. I was so bad that I could not get a chessboard in any store around.

My search went on until one day in 2015, the Student Union Governing Board of my university announced a Chess competition. I registered with the organizers and one of them was kind enough to direct me to where I would get a chessboard. With this chessboard, I was able to master chess again and became the Champion of the 2015 Unizik SUG Chess Competition.

Subsequently, I lost interest again because many people around me seem not to be interested in chess. They preferred football, ludo, or betting games. “Go for beta game wey go give you money, no bi all the time chess chess chess.” They would say. “How many people have you seen that built houses, bought cars, or own conglomerates through chess? Oga go and play football or enter Onitsha Main market!” Some others would advise.

Truth be told, at that time I had not come across anyone who made a career out of chess, unlike footballers. I would have loved football, but being an “indoor kid” killed the football flare and all outdoor games!

In 2018, I relocated to Federal Capital Territory Abuja Nigeria from Anambra in search of greener pastures after my graduation from the University in 2017. One evening in 2019, to get away from the frustration of so many failed job search, I picked up my little chessboard to play, but could not find anyone around me that I could play with.

This automatically increased my frustration. So I went online to browse about chess clubs in Abuja, and lo! I saw “The John Fawole International Chess Awards.” I couldn’t believe it. Is there really something like this? I thought to myself.

Out of curiosity,  I browsed the name John Yemi Fawole on Google and saw him on Wikipedia. After reading about him, I sent him a friend request on Facebook and he accepted, He sounded so nice on our messenger chats notwithstanding his big status. It was like my heavy hot heart was brought out and washed with chilled water from the fridge. I was so happy with the response and encouragement.

I went on that evening surfing the internet about chess. I later found Cass-Meet Chess Club at Discovery Mall Wuse2, Abuja, and joined them. There I met wonderful tutors and like minds. I finally found my space!

Today, I have learned how to play chess so well that I teach beginners through my Elohim Chess Club. I have been hosted by numerous media firms to teach and talk about chess. Just last month, I was hosted on Nigeria Television Authority(NTA International) Abuja on the program “Young Hearts” where I taught viewers how to play chess, Its history, advantages, and lots more.

On a lighter note, Chess has been so good to me that I won my girlfriend’s heart in a chess battle with a fellow chess player/suitor. We were crushing on the same girl and decided to settle with a chess duel and I won! How romantic is that, right? My greatest chess aspiration is to grow into a Professional Chess player soon and so help of God.

This is #MyChessStory. Elochukwu Fame Ezeumeanya, writes from Abuja, Nigeria

Encourage others with your chess story. Bruvschess Media is now accepting chess stories from all over the world. Send in your story Now! @bruvschessmedia@gmail.com