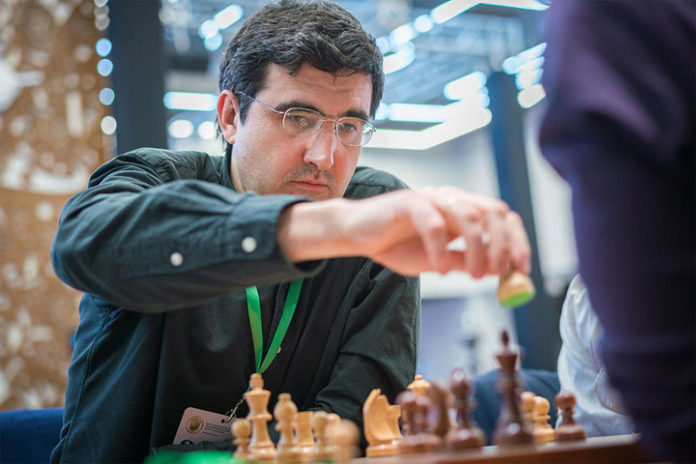 As the world goes through a global health crisis, chess stands out as a unique sport that has successfully resurfaced online to bring together professionals, amateurs, and fans around the world. Besides, chess can serve as an excellent platform for charity and collaboration. At the initiative of the tournament participants, the Chess Federation of Russia and the Ministry of Sports of the Russian Federation will co-support the first charity online tournament that will feature the country’s strongest grandmasters. The event is scheduled to take place in mid-May.

The prize pool will be shared among regional hospitals and health workers fighting the COVID-19 epidemic. The participants will determine beforehand the amount and recipients of the donation, depending on the needs of a particular institution. The entire prize fund is distributed equally among the regions, regardless of the final standings.
The charity tournament features a stellar lineup:

It will be a double round-robin event. Time control is five minutes per game plus a two-second increment per move.
The tournament will be played on Lichess.org.

Kommersant: I understand that you are the main initiator of this online tournament?

VK: We, its participants, are all initiators.

In any case, your performance will surely attract the most attention – the 14th world champion, moreover, formally completed his career more than a year ago…

Well, in blitz, for example, I continue to play. It’s just that I don’t play in more official competitions, just for fun.

So what kind of tournament is this?

My fellow chess players naturally discussed the current situation and decided to organize a charity event. Now, for all the known reasons, there are no sports competitions. Chess is one of the few types that can exist even in the current conditions. Some online tournaments are held. But we did not want to organize a commercial, but a charity competition.

We have a big country, and it’s hard to help everyone. Nevertheless, we want to do what is in our power. So, we came to the conclusion that in large cities, regional centers, everything is more or less in order. But if you move a little further away, then the situation there is often much worse. In general, I wanted to help hospitals, doctors – with protective suits, equipment, drugs. So this tournament appeared.

All those who were on the list of participants immediately agreed to the plan?

Immediately, all eight people. Although, in principle, we can increase the number of participants to ten. Everything will depend on what interest our initiative will cause, how much money will be able to raise. The concept is as follows. There are eight of us, and each, as it were, is responsible for his region – the one where he was born or where he lives. Targeted help will go there. I am responsible for the Krasnodar Territory, or, one might say, the entire south of Russia. Yan Nepomnyashchy is the Bryansk region, Alexander Grischuk is Moscow, Sergey Karjakin is the Crimea, Peter Svidler is St. Petersburg, Evgeny Tomashevsky is the Saratov region, Alexander Ryazantsev is Siberia, Ernesto Inarkiev is the Caucasus. Uncovered regions remained. If there are enough funds to really help, we will cover them.

Does the tournament have a prize pool?

For the players, it does not. Everyone will play for free: the project is purely charitable. We are now studying how the situation is developing in the regions, which medical institution is lacking something in the first place. Each of the participants will announce before the start of the tournament where the money should go – all the funds raised will be divided equally between the participants. Help will be provided both in money and equipment, medicines, at the discretion of the participant. I hope that we will gather enough to provide quality assistance to two or three hospitals in the region.

And we will make the project as transparent as possible. An account number will be provided on the tournament website where each individual or legal entity can transfer money. Probably, it is not necessary to indicate the specific amount that this or that donator donated so as not to start the competitive process between them, but on our site, there will be a complete, up to a penny, report on the current total amount of money and the names of all donors. Plus, when and for what purpose the funds were transferred. I hope that our initiative will set a certain trend and other charitable projects with the same tasks will appear in our country.