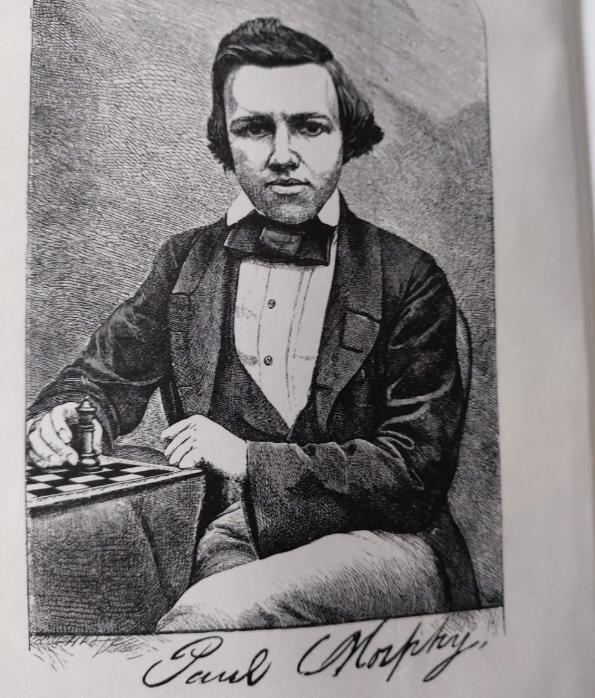 The November/December 1961 edition of the South African Chessplayer reviewed the book “The Chess Players”. The review stated the following:

Mrs. Francis Parkinson Keyes, the popular novelist, has done a great service to chess and chessplayers by making Paul Morphy the hero of her latest novel, The Chess Players”, (Eyre and Spottiswoode Publishers Ltd, London). The amount of research, both chessical and historical, which

she must have put into this work, is tremendous. The result is a major work of close to 500 pages, possibly too lengthy and too detailed for some tastes.

For easier digestion it is useful to keep in mind that it consists of three interwoven parts, namely:

I then recalled that I, in fact, had a copy of the book in my chess library. I thereupon took the next few days to read this novel. I found it very intriguing. Many of the aspects sounded familiar to me. I then discovered that some of the information was taken from a lovely book which I also have, called “The exploits and triumphs in Europe of Paul Morphy the Chess Champion” written by Frederick Milne Edge (published by Dover publications and was published for the first time in 1959).

The Englishmen Edge, a correspondent for the New York Herald, had acted as an assistant secretary for the 1857 Congress (secretaries were available to players to record their moves!). He then accompanied Morphy on his journeys in Europe and in particular in Paris and London. The Edge book was great to read after the novel because as a chessplayer I wanted to know more about the games!

Gary Kasparov in his book series “My Great Predecessors” looked at Paul Morphy on pages 32-44 of Volume one in his delightful series.

All the books echoed the well- known facts: Paul Morphy was born on 22 June 1837 and died on 10 July 1884. His father was from Spanish origin while his mother was French. In the book by Keyes she goes into detail into the family lineage of Morphy. Morphy won the First American Chess congress in 1857 when he defeated Louis Paulsen in a match. The most famous game from this match was game six which Kasparov analyses on pages 32-34.

What did Morphy (Black) play in this position?

After this the New Orleans chess club issued a challenge to Howard Staunton who was recognised as the best player in the world. Staunton however in a letter stated he was far too busy and opined that perhaps Morphy not being employed or with a family should rather come to Europe to play the masters there.

Once Morphy arrived in England, Staunton each time ducked the question of when the match should start. He stated pressures of work etc. In the meantime, Morphy was playing off hand games in London. He even played some consultation games against Staunton. When it became clear that he would still need to wait a few weeks he journeyed to Paris to play the masters there.

While in London he played Bird who was recognised as a master. What move did Morphy (Black) play?

Two awesome moves!!!! These positions have been the subject of a century of analysis which can be found in any major chess book. Enjoy the game!

Edge on page 75 of his book says the following, Mr Bird arrived and the result between the two was more startling than ever, Morphy winning ten to one. It is but just to state that Mr. Bird was somewhat out of play, as he himself observed; adding, however that he never was a match for his antagonist. It gives me great pleasure to relate such instances as these, because, as a general rule, there are no more self- confident mortals than prominent chessplayers. (Can this be true!?)

Morphy and Edge then travelled to Paris where he played two matches against Harrwitz and Anderssen, two German masters with the latter having won the 1851 Tournament in London. Morphy played many offhand games and blindfold games at the Cafe De La Regence. Keyes has woven in her novel many of these matches into her stories. She delights the audience and tells the readers that Morphy was celebrated wherever he went and of course works in romance as well.

Edge tells us on page 150 of his book a bit about Harrwitz. He states: “Some of my readers will remember the rebuke he gave Mr Staunton, when playing his celebrated match with that gentleman.

Harrwitz had made a move which caused much reflection to his opponent, who rolled about on his chair and stroked his forehead energetically, as only Mr. Staunton can do, giving spectators the impression that his brain was in agony of labour. He examined the position, and re-examined it, but the more he looked, the less he liked it. Savage at being balked, he exclaimed –“Well, I have lost a move”, and thereupon played a piece.

Harrwitz coolly rises from his seat, rings the bell frantically, and gives the following order: “Waiter, look about for a move; Mr. Staunton has lost one”!

What move did Morphy (White) play? The position is ripe for a little combination! There followed Rxh7+!

Edge recounts that all the French newspapers wrote about Morphy. There were also cartoons about him. One was about a man who declined to enter the Cafe De la Regence in company with his wife, because there was inside a certain Mr. Morphy who would capture his queen from him!

Andersen on the left playing against Steinitz

Morphy. A schoolteacher by profession he gave up his December vacation to play the match.

Kasparov analysed the ninth game of the match.

Morphy (White) now went for Ncd5! and followed up with an attack! Kasparov gives the next position as the critical one!

Another good game was the following:

Edge then writes on p198 that Mr Staunton made some remarks about Herr Anderssen’s play to which Anderssen responded, “ Oh, we know Mr. Staunton; in 1851 his opinion of my play were not very high, and he lost not by my skill, but because he was ill. Mr. Staunton always has two meanings, one which he writes, and one which he keeps to himself”. (So, it seems even as long ago as 1851 the “I was ill” excuse cropped up!) Anderssen was awarded his doctorate in mathematics in 1865 in Germany.

Kasparov ends his tale of Morphy by quoting various world champions. I found the remarks of Euwe the best. Euwe said that Morphy brought three main principles to opening play:

Edge ends his tale of Morphy with the following valedictory:

“Paul Morphy has vanquished the paladins of the Old and New Worlds, and vaulted into the very throne of Labourdonnais and Philidor.

Is not this indeed a victory for him, – a triumph for his countrymen? Shall not this youth be esteemed worthy of all honour, who without experience, has, by his own marvellous genius eclipsed the brightness of those stars which have flashed in the chess firmament before him?

Chess may be but a game, a pastime, a relaxation; but Chess has at times absorbed the faculties of the intellectual in every clime; it numbers amongst its amateurs the greatest names of battlefields and thrones; it tells of warriors, poets, painters, sculptors, statesmen and divines; it possesses a literature and language of its own; it makes enemies friends, and finds a template on the ocean, in the fortress, and by the peaceful fireside.

And long as Chess shall last, Paul Morphy’s name will be a household word, and his deeds be held in lasting memory”.

So dear reader shall we return to the book of Mrs Keyes. We were side-tracked by Kasparov and Edge! But what wonderful sidetracks they were! Keyes has given each chapter a particular chess term. Part one is called The Queen is the strongest piece and starts the story in January 1825 to 1829. Part Two is called the Knight moves forward and is set in the period 1847 to 1857.

Throughout the text of the story, the book is peppered liberally with chess quotations. The first one is taken from Benjamin Franklin’s Morals of Chess in which he says that by playing chess we can learn:

She quotes Morphy when he gave a speech upon his return to the Unites State from Europe. Morphy says in New York in 1958,” A word now on the game itself. Chess never has been and never aught to be but a recreation. It should not be indulged into the detriment of other and more serious avocations- should not absorb or engross the thoughts of those who worship at its shrine, but should be kept in the background, and restrained within its proper province. As a mere game, a relaxation from the severe pursuits of life, it is deserving of high commendation”.

The last part of the book is dedicated to a plot relating to the warship the Alabama. I was intrigued when I read this because the Alabama and South Africa has a bit of a history. The Cape Minstrels has as one of its songs: Here comes the Alabama, the Alabama… The Alabama sailed to Cape Town during the American Civil War hence the reason why in South African we have a song about it.

According to a cursory Google search, The Alabama in the course of 22 months boarded 447 ships of all nations, captured 69 Union vessels, took 2000 prisoners, sank the Union warship Hatteras and engaged the USS Kearsage. The story according to Wikipedia is that thousands of Capetonians lined Signal Hill and other high points beneath Table Mountain as Raphael Semmers, skipper of the Alabama masterfully toyed with a Yankee commerce ship, Sea Bride. After some strategic manoeuvres and shots fired off the brow, captain Semmers steered his prize into Cape Town Harbour where he was given a rousing welcome.

I was glad that I was able to spend the first few weeks of 2020 looking at the games of Paul Morphy. I had an interesting discussion with a young player who told me that the debate is out there whether these old games are still worthwhile going over. He said Carlsen said it may be better to play more blitz online! I responded to say that all the grandmasters will indicate that you must be grounded in the positional principles of old.

I leave you with the words of Mikhail Botvinnik, three-time world champion (Kasparov p44): To this day Morphy is an unsurpassed master of the open games. Just how great was his significance is evident from the fact that after Morphy nothing substantially new has been created in this field. Every player- from beginner to master- should in praxis return again and again to the games of the American genius.

I acknowledge the following two books that has some great portraits which I used in this essay:

A History of Chess by Harry Golombek, Routledge and Kegan Paul, 1976 and

The World of Chess by Anthony Saidy and Norman Lessing, A Ridge press book, 1973.

I leave you with his most famous game! Can you guess? What did Morphy (White) play?