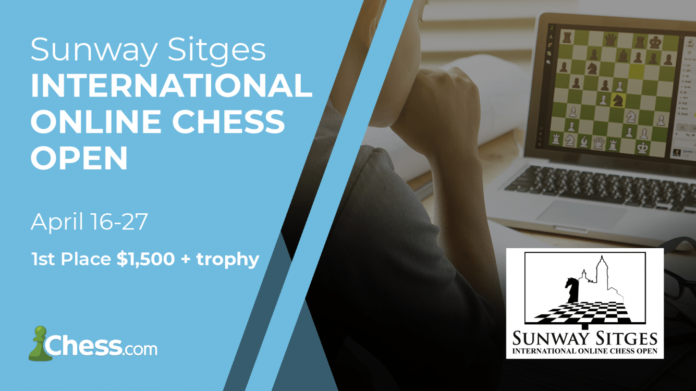 You can register now and support the local Sitges hospital in their fight against COVID-19.

There’s the regular open tournament in Sitges, Spain, which is still scheduled for December 2020. In the meantime, organizer Oskar Stober Blazquez came up with another event: the Sunway Sitges International Online Chess Open tournament—a full-fledged open tournament, which is not FIDE rated and is played online.

The format is a 9-round Swiss, followed by a 16-player knockout. The time control for the Swiss portion is 90 minutes per player for the game, with an increment of 30 seconds per move. The first prize is €1,500.

You can register by filling out the form below. Registration for the tournament shall be valid once the registration form has been filled in and payment by a valid credit/debit card has been confirmed. The registration fee is 15 euros or $16,50. All benefits will go to a local hospital fighting COVID-19 (Hospital Residència Sant Camil) after the deduction of tournament costs. Players in either category who have an existing Chess.com diamond membership may gift their prize to a friend or family member.

Below is some more information:

The number of byes a player can request is unlimited. For each bye or rest requested, zero points will be assigned. Byes should be requested by sending an e-mail to referees before the end of the round before the one they are requesting the bye.

After the 9th round, a provisional classification for both groups will be obtained by applying the following tie-break system, and in the following order:

The top 16 finishers in the swiss portion of each group will have to play match-play knockout games that will decide the final general classification. This match-play knockout system (round of 16, quarter-finals, semifinal and final) among the top 16 players of each section of the tournament, will take place in the following way:

All games will be checked by Chess.com’s Fair Play Team and by the tournament arbiters. Furthermore, arbiters will be entitled to use video surveillance of players. Games under video surveillance can be decided both prior to the start of each round, randomly during each round or even by the request of a player. The arbiters reserve the right to decide in each case.