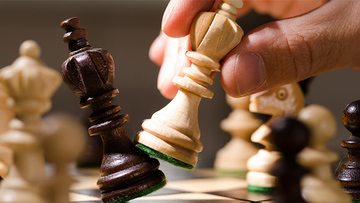 David Elorta becomes the highest profile local chess player whose account has been taken down for alleged cheating in an online tournament.

David Elorta, acknowledged as the king of Philippine blitz chess, was disqualified while leading an online blitz in Qatar Friday night, April 10, earning an automatic three-month playing ban from the National Chess Federation of the Philippines (NCFP).

His online chess account KingDavidPH was closed by server lichess.org after Elorta led the tournament with 13/14 Friday night, Philippine time.

“The rule must be applied to all or it must not be applied at all,” said NCFP executive director Cliburn Orbe.

“The accounts of Ronald Hermida and David Elorta were closed by lichess.org for computer assistance. Per our rules they will be banned from NCFP tournaments for 3 months.”

Ever since online chess tournaments became the rage in the Philippines, there have been reports of cheating done by local players which foreign chess servers have been quick to flag down.

Elorta is the highest profile master whose account has been taken down.

Originally, the ban by NCFP for being caught using computers in online event was two years, but after a 15-year-old from Cavite was disqualified, creating a furor, the NCFP reduced the two-year ban to 3 months

In a text message, Elorta said: “I don’t know what happened. I just went all out in my playing. Then, I found out that I was banned.”

“I will not appeal to the NCFP… I will accept whatever is their decision,” he added.

Long famous for his speed and clean technique, Elorta has become a legend in chess clubs. He has reduced playing in tournaments for the last few years.

Elorta said it was possible that tournament organizers were somewhat surprised by his play.

“I am an unrated player to them and they don’t know me,” he added.

But a local master, who asked not to be named, said: “I have known him for years. I saw his game. He played aggressively and had a high rate of accuracy.”

Elorta said he will take advantage of the three-month suspension by NCFP to rest, study and prepare for his scheduled teaching session to young players.

Joel Banawa, a US-based International Master who unsuccessfully tried to appeal the closure of Elorta’s lichess account, said the speed king “will be all right and bounce back strong.”