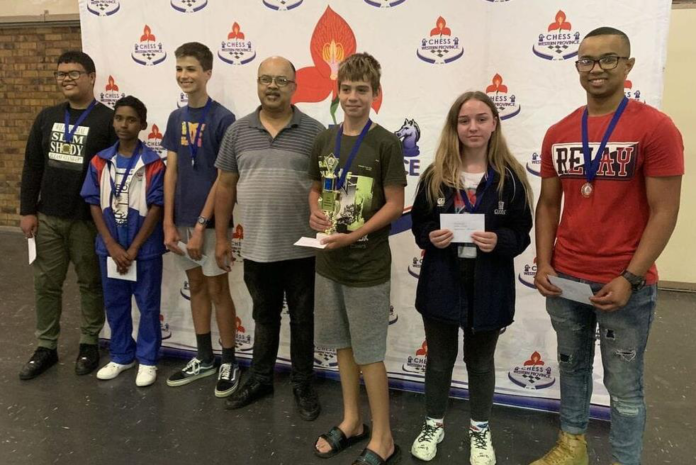 In February 2020 Chess Western Province hosted the annual Cape of Good Hope Open as its traditional first tournament of the year. Do you have some time? Have you ever wondered when the event started and why did it start? I wonder about these aspects. So, I decided before I jump into the report of this year, I will take a trip down memory lane. Do you recall when JR Ewing was shot? Did you know that South Africa came to a standstill on that fateful Tuesday night? I think I also started supporting Tottenham Hotspurs that year because they won the FA Cup when the beat Manchester City. The year was you guessed it…- 1981!

Nick Barnett in a great article in the March SA Chessplayer 1981 edition picks up the action. He writes on page 17 that,” the idea of a holding a chess tournament in conjunction with the Cape’s premier Agricultural and Industrial Show was the brainchild of the Western Province Agricultural Society’s Chairman, Mr Chris Muller. He received a little help from Errol Fyfe’s Cape Town office, a public relations firm which incidentally handles Oude Meester. This year (1981) the Cape Show celebrated its 150th anniversary since its first venture on GreenPoint Common. Now the country’s number two Show after the Rand Show, this year’s event ran for a fortnight. The idea was to put culture into agriculture by holding a chess tournament during the second week.”

The event turned out to be a triumph for 15-year-old Donald McFarlane who won the event ahead of Charles De Villiers who had just returned from France. There were 58 competitors. Let’s look at a few games from that event. Jacques Tsalicoglou became the first player to beat De Villiers in 41 games of tournament chess. Let’s look at the critical moment: what should White play?

Jacques Tsalicoglou played 31. Qxg6+ Kxg6 and followed up with 32. Be6. To reach the following position: White won the brilliancy prize for his original queen sacrifice. Enjoy the game.

Another interesting game was played by Mark Levitt as Black against Cunningham. What would you play as white in this position?

Indeed, Cunningham played 28. Rxf8+ Kxf8 but cannot capture on g6 because then d4+ is mate! A nicely played game by the young Mark Levitt!

The results of that event:

2nd to 4th with R100 each Theodore Buttress, Charles De Villiers, Jacques Tsalicoglou and in the 1600-1799 category winning R25 with 5/7 was David Gluckman and Kevin Mcmanus with Ivan Gluckman winning the Primary School prize of R50.

Well let’s jump back to the future and zoom right into 2020! Now this event traditionally kicks off the Cape season. This year the event was held in February. The event was divided into various categories. This report will concentrate on the top section with the other sections shown in their tables and with a few pictures.

The event was always going to be a good contest between FM Calvin Klaasen and IM Watu Kobese. Both former SA Closed Champions, these two players have come to dominate the tournament scene in Cape Town. This year though Michael James, Warrick Erlank and some youngsters like Paul Gluckman and Albrecht Van Zyl were all vying for honours. Ultimately the event was won by IM Watu Kobese who showed that he is still the Lion of Africa.

Kobese has been winning events since the 80’s and continues to show himself as the player to beat in Swiss events! He certainly has big match temperament. Kobese beat Klaasen in a strategic game where he was better but Klaasen defended well. In the time scramble however Klaasen gave Kobese one chance which he took.

I enjoy the beauty of chess so let’s indulge ourselves in some of the games.

The black position has two rooks, two Bishops and a queen in the vicinity of the white king. Black

Craig Fraser from Blackjacks loves his chess and loves his tactics. What did he play as White here against Carelse?

Rd6 wins a piece as the queen has no safe square!

The following game is a tactical melee which I enjoyed very much. Opening theory has developed to such a degree that you must really stay on top of your game. Let’s look at the following position:

Erlank has just sacrificed his Bishop on b5. So, what should Black play? Well the move chosen was 12 Ra4 to which White replied 13. b4. The complications are immense, and I leave it to the intrepid readers to work out the complications!!

In this position the Black king has ventured to far and after Ke6 white played Rf6 winning the queen. A great game. Enjoy the game when you play through it. The game was played imaginately by both players!

FM Bhawoodien is making a habit of handing out lessons to the youngsters. What did he play here against Van Zyl?

Rxd7 is the move as Bxf6 continues the attack!

How did the former SA over 65 champion win this position as Black? Stephen Gallied vs. Gordon Lawrence.

Black found the idea of moving his King to h3! And then secured the win!

The same position but look at the position of the black King. Many players are sometimes impatient. Here our older champions show us that with patience comes the victory! Enjoy the game and endgame technique. The King is indeed a fighting piece as Black showed in this game.

Michael James is a very tactical player. What did James play here as white against Seth Riley Adams?

James realises that the Nf6 is pinned and the Rh8 is overloaded so…..  Rxh7+ was essayed which led

to the win of the black queen on c8.

James needed to end the game against Adams who was still resisting. What should white play here?

James realises that the black rooks are looking clumsy so after pawn to c4 black replied Rc5 and he was forced to resign after pawn to b4!

He went for Rxf2+ creating immense complications which led to the win of the white queen on e4!

Andrew Mc Innes from UCT loves his chess and in particular he has a flair for attacking chess. What did Mcinnes play here against Johnson?

Mcinnes played Rd1+ as Qf1 is mate once the Bf3 captures on d1!

It is normally said that one shouldn’t capture the pawn on b7 or b2. What did Seth Riley Adams play here as Black against Trevor April who has just played Qxa7?

Riley, a former SA under 12 champion a few years ago played Nc5 trapping the queen as there are no return squares!

The fast time control didn’t allow for the following game to be captured completely but I loved the pawn race on both sides! Enjoy the game!

What move did IM Kobese play against Warrick Erlank which effectively clinched the event?

The move was 24 Rd7! It has such a great geometric feel to it because of course if the rook captures then the Nf6 forks the black king and queen on e8. Black made a few more moves but Kobese mopped up efficiently to take the title.

Mfazwe sacrificed his queen in the following Grunfeld. I however enjoyed the final position as it was again a unique mate! What did White play here?

Do enjoy the rest of the week!