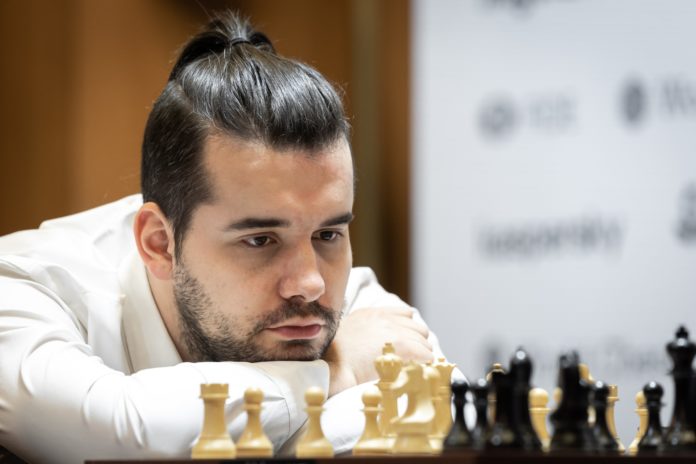 The candidate tournament 2020 has reached its Round six. So far, Ian Nepomniachtchi (Russia) is the current tournament leader.

March 24 is a rest day at the 2020 Candidates Tournament. Round Seven is played on March 25 at 4 PM local time. The pairings for the seventh round are:

Anand Viswanathan talks about life in lockdown in Germany

I had come to Germany in February to play in the Chess Bundesliga for my team OSG Baden-Baden but the matches got canceled because of the spread of the Covid-19 outbreak. Before returning to India, I decided to voluntarily isolate myself for some days, as a precaution and to be socially distant, in my apartment near Frankfurt. But by then the travel restrictions (by the Indian government) were in place, so it made sense to follow them rather than put yourself as well as your family at risk.

This is a very unusual experience for me as I am doing something like this for the first time in my life. I do keep in touch with my family and have a video chat with my son Akhil and wife Aruna daily. We try to get some happiness in these difficult times by talking to each other. I have been playing chess with Akhil too. Aruna tells me to “as a dad!”

Basically I am staying in the apartment most of the time. To keep myself fit and engaged, I do a lot of exercises at home, like yoga and stretching. Plus, once in a day, I go out for a short walk just down the block to get some fresh air. I avoid going to places where people congregate. If I need to buy a few things, then I visit the nearby grocery store but for the rest of the time, I stay indoors.

There are no problems with getting basic things here. Basic necessities are exempted from the shutdown, pharmacies are open, and people are trying to order in rather than going out to restaurants.

The Covid-19 pandemic has impacted my playing schedule, as the Bundesliga (chess) matches last weekend got canceled. We are all waiting for the news of how the future of this tournament will shape up depending on the result of this outbreak. Even other tournaments are suspended or canceled, so we will have to wait till things are in control to think of the chess circuit.

One thing that keeps me busy in the evenings is the online commentary for a chess website that I am doing for the Candidates tournament that is currently going on in Ekaterinburg, Russia. I am connecting with people from the website from Germany for commentary on the games. This is a new experience for me as it’s the first time that I am commentating on this scale (most other times, I have been involved as a participant).

As far as returning to India is concerned, we are following the travel advisories right now and based on what the government of India and Germany say, we will go with that. As of now, flights have been canceled till March 28, so we will have to see post that what the scenario is.

This is a global issue and one thing that is very crucial in this is that no cure has been found for this virus. So all we can do is follow the advisories issued by the government and implement social distancing as much as possible. My wife always reminds me to keep indoors as much as possible and wash my hands at regular intervals—generally asking me to follow the dos and don’ts. Everybody has to follow what the authorities are saying so that we don’t contribute to the spread of the outbreak. Let’s all be safe and healthy. SOURCE: hindustantimes.com