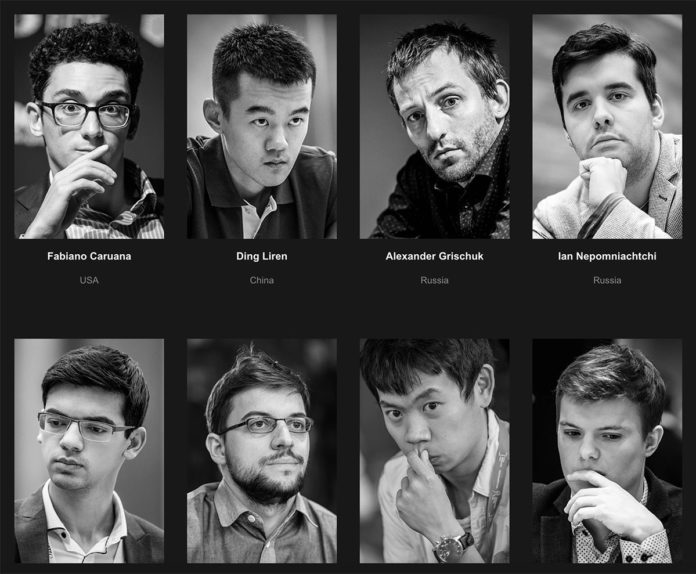 The 2020 FIDE Candidates Tournament opens officially today, March 16, 2020 in Yekaterinburg, Russia. One of the most important chess events of the year, it will bring together eight top world players competing to become the challenger to Magnus Carlsen at the FIDE World Chess Championship Match at the end of this year.

The eight players will play a double round-robin tournament (14 rounds). The rounds will be held between March 17 and April 3.

The official opening of the Tournament will take place today March 16 at 7 PM at the Congress Centre – Ekaterinburg Expo (Address: 2, Expo Boulevard). Before the beginning of the ceremony, between 6.15 and 6.45 PM, members of the media will be able to meet with officials and the participants.

On the same day, at 1 PM, there will be a pre-start press event mainly for Russian media, attended by the officials, organizers and some of the players. The event will be held at the Sverdlovsk Journalists’ Union, (Address: 1, Clara Zetkin Street).

The games will take place at the Hyatt Regency Hotel (Address: 8, Borisa Yeltsina Street) from the 17th March to 3rd April.

The First Round will begin at 4 PM local time (noon CET; 4 AM PST). Pairings for the First Round are: M. Vachier-Lagrave – F. Caruana; Ding Liren – Wang Hao; A. Giri – I. Nepomniachtchi; A. Grischuk – K. Alekseenko.

The closing ceremony is scheduled to take place on April 3 at 9.30 PM at Sima-Land (Address: 86, bld. 8, Chernyakhovsky Street).

This is the largest ever prize fund for a Candidates Tournament.

There will be live commentary in English, Russian and Chinese. The live broadcast will be on the main page of the official tournament website: https://en.candidates-2020.com/main.

Spectators who come to the venue at the Hyatt Hotel will be able to listen to the live commentary of GM Sergey Shipov, which will take place in the activities zone.

The Candidates Tournament will feature additional events focused on promoting chess in the local community.

On 16th March there will be the ‘Karpov Blitz Cup’, then the Russian Rapid Chess Cup for boys and girls in the U-9, U-11, U-13 and U-15 categories. On March 17 and 18, the Cup of the Governor of the Sverdlovsk Region Evgeny Kuyvashev will be held.

Also, an exhibition of stamps of the 12th World Champion Anatoly Karpov is planned, as well as a presentation of exhibits from the Chess Museum of the Chess Federation of Russia.

The following health and safety measures will be in force:

1. A check-point with a qualified nurse will be created for all participants of the tournament, and officials and visitors in the auditorium. At this point, visitors will be checked for symptoms of Covid-19 before entering the game room, including checking their body temperature.

2. Alcohol-based hand sanitizers will be available at all times.

3. N95 face-masks will always be available in the required quantity. Depending on the assessment of the situation, the wearing of masks may become mandatory for visitors in the auditorium.

4. Handshakes before and after the game are optional.

5. Spectators who come to the venue will not have access to the playing area.

6. Preventive measures (masks, disinfectants) must also be provided in all hotel rooms where participants and officials will be staying, as well as in all vehicles used for the tournament.

Other preventive measures may be put in place, depending on requirements.

For the duration of the event, all media organizations will have access to the official FIDE photos free of charge.