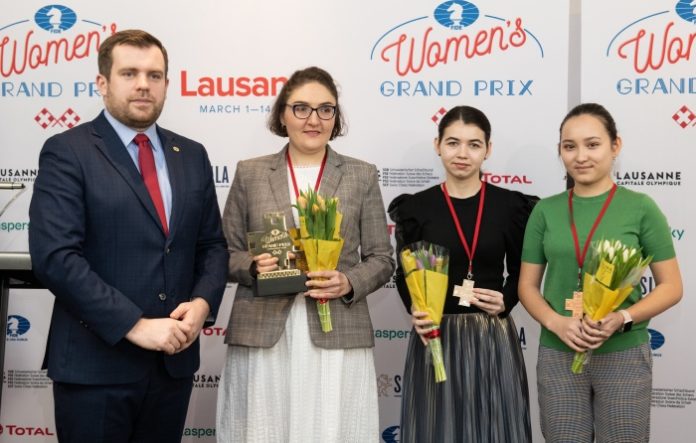 The third leg of Women’s Grand Prix took place in Lausanne City in Switzerland from March 1-14, 2020. Twelve players competed in a round-robin tournament.

The last-round clash between two leaders Nana Dzagnidze and Aleksandra Goryachkina ends in a draw. As a result, the Georgian clinches the trophy on tie-break. The last-minute entry Zhansaya Abdumalik takes an impressive third place.

All six games of the final round were drawn at the Lausanne FIDE Grand Prix. Nana Dzagnidze refused to take any risk and played the exchange variation against Aleksandra Goryachkina’s Slav Defence. The game remained balanced all way through and the players repeated moves quite early on. Both share first place with 7 points, but the Georgian takes home the trophy thanks to her higher number of victories in the tournament. Zhansaya Abdumalik could have caught with them in case of victory. After her opponent Marie Sebag went for a solid line, both seemed happy to repeat moves after the opening. With this draw, the Kazakhstani secured her third place on the podium.

Anna Muzychuk had some pressure against Alina Kashlinskaya, but the Russian gradually solved her problems and reached a draw. The opponents tied for fourth place with 6 points each. Mariya Muzychuk and Harika Dronavalli went for a sharp theoretical line of the Sicilian which resulted in a perpetual check. Ju Wenjun and Alexandra Kosteniuk also tested a sharp variation, but after things simplified around move 30, both champions agreed on a draw. The most exciting game of the round was played between Pia Cramling and Antoaneta Stefanova. White emerged from the opening with an advantage, but when the position got complicated the Swedish legend preferred the safest route and offered a draw on move 31.

Thanks to her victory in Lausanne, Nana Dzagnidze made a huge jump in the standings of the Grand Prix Series. The first qualification spot in the Candidates Tournament seems to be reserved for Humpy Koneru, but the second place will be hard-fought at the last Grand Prix leg.

At the closing ceremony, FIDE Vice-President Lukasz Turlej praised all players for their interesting and exciting games and thanked all sponsors and partners: Total, Kaspersky, Gazprom Bank, the Swiss Chess Federation and the Olympic Capital Lausanne. He added that the event had attracted a record number of spectators.