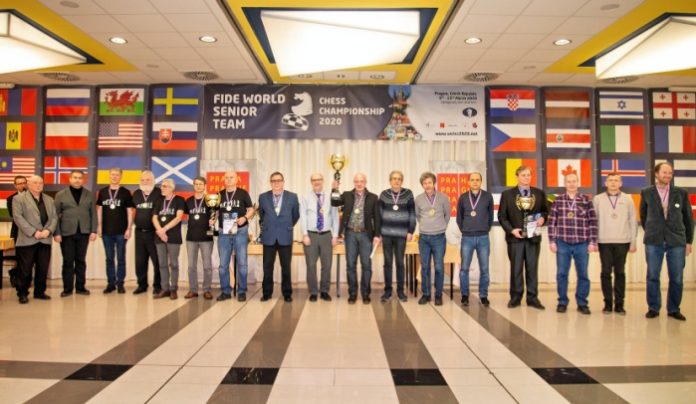 2020 World Senior Team Chess Championship, organized in Prague under the auspices of Mayor MUDr. Zdeněk Hřib, has come to an abrupt but necessary end after the 7th round, following the prohibition of all public events with more than 30 attendees due to the state of emergency declared in the Czech Republic today to combat the spread of the COVID-19 outbreak.

FIDE would like to use this opportunity to thank Mr. Roman Prymula for his personal involvement and invaluable support. It should also not go unmentioned that Mr. Prymula is no stranger to the world of chess, besides being a prominent epidemiologist, he is also an experienced chess player who holds the title of FIDE Master!

Earlier, on Tuesday, March 10th, the National Security Council of the Czech Republic had banned all public events with more than 100 people attending. Following the advice of the Deputy Minister of Health of the Czech Republic Mr. Roman Prymula, the World Senior Team Chess Championship was split across smaller venues to be able to comply with the ban. However, the latest measures have made it a sad necessity to end the championship immediately.

The 7th and – as it happened – the final round was to be an interesting one, with difficult matchups in both categories. This happened to be indeed the case and there was even more drama added because of the extraordinary times we all find ourselves in.

In the 50+ category, USA was leading by one point over Czech Republic 1 and Iceland before today’s round. A quick match draw with the latter secured the championship for themsince the Czechs also agreed to a quick draw with Team Yamal from Russia. But this wasn’t the end of the story.

The President of the United States, Mr. Donald Trump announced that a travel ban from Europe to the USA will be put into effect on Friday which caused the team USA TOO to buy tickets and leave the championship at midnight in a rush to be able to go back home before the ban sets in. It later transpired that the ban does not apply to US citizens but by then it was already too late according to a post by Mikhail Koganov on Facebook. This resulted in a forfeit for USA TOO obviously and their strong opponents Lasker Schachstiftung GK moved with this much easier than expected 4-0 win into the second position, just above Czech Republic 1 and Island thanks to their better tiebreaks. Of the five teams with 10 points, the Czech team 1960-1961 and the Russian Yamal had better tiebreakers and they ended as 4th and 5th, respectively.

The top three finishers among the women teams in the 50+ category are Russia Women (9 pts) who surged ahead of Czech Republic Women (8 pts) with the last round win and finally Latvia Women (6 pts).

It was clear that the 65+ category would see an exciting finish as five teams were sharing the first place with 10 points after the sixth round! Their matchups were obviously critical for the final standings and the two teams who managed to win in the 7th round, Russia (d. Die Franken) and France (d. Israel), have got the top two places in the end, in that order. The 3rd and 4th places are shared by two German teams, Schachfreunde Leipzig and Germany 1 with 11 points. They are followed by a pack of five teams having 10 points with Israel as the team with the best tiebreaks among them getting the 5th place and Sweden the 6th. The two women teams in this category, Germany Women and Czech Republic, have also put up good fights and finished with 8 and 4 points respectively.

2020 World Senior Team Chess Championship ended with the official prize ceremony where the money prizes, medals, and cups were awarded to their deserved winners.

The first and foremost thanks go to all the players and teams who have participated obviously. They showed tremendous enthusiasm and sportsmanship in an extraordinary time and deserve the highest praise. FIDE would also like to thank the Tournament Director Jan Mazuch, the Deputy Director Petr Laušman, the tournament managers Jiří Petružálek and Michal Horáček, and all the organization team for their professionalism and their efforts into keeping this tournament going, despite all the difficulties.