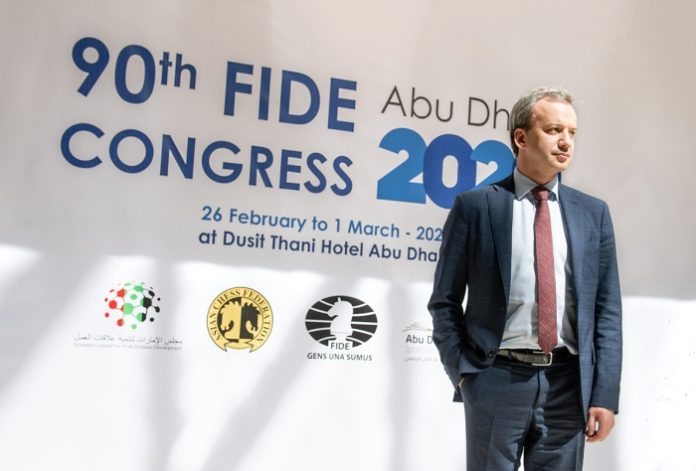 EB/01 The Treasurer’s report for 2018 was unanimously approved.

EB/03 The Treasurer was discharged from her responsibilities for the financial year 2018.

EB/04 The Budget for the financial year 2020 was unanimously approved.

– Reports of the Continental Associations

EB/05 The Reports of the Continental Associations were approved.

– Assessment of Сommissions’ achievements for 2019

EB/07 The title application recommendations presented in the Arbiters’ Commission report were approved with three (3) corrections given by the Chairman in his speech on the floor.

EB/08 The Chess in Education Commission report was approved.

EB/09 The Commission for the Disabled report was approved.

EB/10 The Commission for the Women’s Chess report was approved.

EB/14 The title application recommendations presented in the Events Commission report were approved.

EB/16 The bid from Russia for the World Senior Championships 2021 was approved.

EB/17 The bid from Malta for the World Amateur 2021 was approved.

EB/19 The bid from Italy for the World Junior and Girls U-20 Championship 2021 was approved.

EB/21 Two bids were received for the World Youth Championships U-14, U-16, U-18 2021, respectively from Italy and Russia. The EB was called to vote and the results of the voting were the following: 2 votes for Italy and 30 for Russia, 7 abstentions. Therefore, these Championships were awarded to Russia.

EB/22 Two bids were received for the World Cadet & Youth Rapid and Blitz Championships U-8, U-10, U-12 2021, respectively from Georgia and Croatia. The EB was called to vote and the results of the voting were the following: for 15 Croatia and 24 for Georgia. Therefore, these Championships were awarded to Georgia.

EB/23 A bid from Mexico for the World Youth U-16 Chess Olympiad 2021 was received when the prescribed bidding period was already over. It was approved to extend the bidding period for two weeks so that the Mexican Chess Federation could properly submit its bid.

EB/25 The following fair play procedures were approved: anti-cheating measures were proposed by the Fair Play Commission and FIDE is ready to support (by providing equipment and a commission of experts) the federations which intend to introduce such measures during the next most important tournaments.

EB/29 The Planning and Development Commission report was approved.

EB/31 The title application recommendations presented by the Qualification Commission were approved.

EB/32 The proposal of taking note of the Rules Commission report and the request to the Commission to improve the recommendations was approved.

EB/33 It was acknowledged that the Social Commission report was not submitted and requested to the Commission to submit it soon.

EB/34 The Systems of Pairings and Programs report was approved.

EB/40 The EB members are requested to send their comments about the creation of the Athletes Commission in the following days.

EB/41 FIDE activities regarding the organization of Fischer Random Chess Tournaments were approved.

EGA/01 The President’s report was approved.

EGA/05 The amendments to the Financial Regulations (abolition of fees for participation in seniors’ events and those for Level 5 development countries, excluding membership fees) were unanimously approved and will be effective already for the second half of 2019.

EGA/06 It was decided that the Council will prepare a final version of the Financial Regulations by the next General Assembly to be held in Khanty-Mansiysk (Russia) and start working on a new version of the FIDE Handbook.

EGA/07 The appointment of E&Y as the External Auditor for the annual audit of the FIDE accounts for 2019 was unanimously approved.

– Elections for the vacant positions of the Ethics and Disciplinary Commission

*Please find the correct name of the Bulgarian Federation on the following link: https://fide.com/directory/member-federations

– Amendments to the Financial Regulations

Q1PB-2020/02 The draft amendments to the financial Regulations were recommended to the EGA for final approval.

Q1PB-2020/03The proposed new Charter which will replace the current FIDE Statute was unanimously recommended to the EGA for final approval.

– Extraordinary General Assembly and Executive Board

Q1PB-2020/04It was decided to recommend to the EGA to vote for the vacant positions of the Ethics and Disciplinary Commission, by secret ballots, through relative majority.

Q1PB-2020/05A decision was taken about the participation of Ding Liren at the Candidates Tournament in order to deal with the coronavirus issue: if he arrives in Russia by the 2nd March, he will play as the other players, otherwise, the Council will discuss to let him play through videoconference.