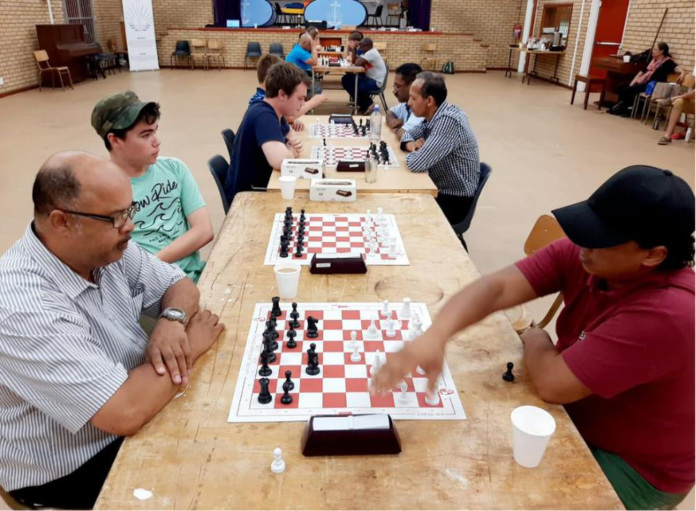 The 2020 edition of the Steinitz Club Championship started on Thursday 13 February 2020. Headlining on board one was birthday man Craig Willenberg. He started off with a tough game against new boy Chris from Melkbosstrand who has joined the club. On board two Lyndon Bouah started off with a win against new member Tina Muringathuparambil, who is a medical intern at Tygerberg.

In the second round I had to fend off the Grob Attack from Mr Schuller who is making a habit of getting good positions from this opening!

Craig in round two outplayed his uncle Glenn!

There are 28 members of the club in total who is playing in the event. It was nice to see many of the old champions and founders of Steinitz playing in the event. Mark Lewis, Shaun Willenberg, Roland Willenberg all came to play in the event. It was lovely to see many female players participating in the championship. Some of the players have played last year in the WP league but many are new. A friend of mine, Gabriel, would be pleased to know that we are continuing with organic growth in the club with the recruitment of new members.

Gerhard De Klerck from Bloemfontein, has recently moved to Cape Town and joined our club. When we played in Bloemfontein back in the day Gerhard and his parents hosted many of our players at their home. Welcome Gerhard to your new chess home. It was good to see Neil and Regan Palmer also competing together at this event. Samantha Rabkin brought her dad Brian to also compete in the event! Thanks Samantha! Prince from Zimbabwe also joined and we also welcome PSV Eindhoven supporter Patrick to the club. Mumtaaz also made her debut at the club and it was good to see Matthew Talmarkes also competing!

It was a lovely surprise to see two arbiters also competing! Andrew Talmarkes and Leon de Jager threw their hats into the fray and it was good to see them so competitive! Well done for taking this step!

Going into the third round on full score was Craig Willenberg, brother Kenny Willenberg, Lyndon Bouah, Luan De Jager, Mark Lewis and Paul Khupwathea. So, Thursday 20 February there were a few the big clashes. Roland Willenberg had held Andreas De Jager to a draw on Thursday.

In the third round Kenny beat his brother Craig Willenberg on the top board. It was a nail biter of a game with both players going all out. On board two Lyndon Bouah and Luan De Jager agreed to a draw after repeating the position in a well-known Grunfeld.

In the fourth round the battle of the brothers took place. Younger brother Andreas seized the lead when he defeated Luan in a tough battle. Lyndon beat Kenny Willenberg to set up a great fifth round tussle with young and up and coming Andreas. Craig played his uncle Shaun and, in that game, Craig attacked with everything and the kitchen zinc! He won at the end although Shaun was trying to defend everything! On board four a battle royal took place between Glenn and Roland Willenberg. These two brothers know all about each other and there was no quarter asked or given. They went at it in the spirit of Tyson Fury vs Deontay Wilder. There were checks and time scrambles and one illegal move was spotted as well by coach Roland! In the end he triumphed as his queen was just too much for the rooks! Mark Lewis beat newbie Patrick after springing into the hall with precious seconds remaining on his clock in the previous round! IM not sure if there is a default time in rapid play!

We are concluding on the 5th of March. I’m glad it’s not the 15th of March as the players would then have to be beware of the Ides of March!

The club presently has close to 60 members on its books and will look forward to welcoming new members at their lovely new venue at the New Apostolic Church at the corner of Third Street and Grove street in Parow. For those that are interested, I attach the club program and the Steinitz Chess Festival. The Steinitz festival takes place annually and we hope to see all of you there.