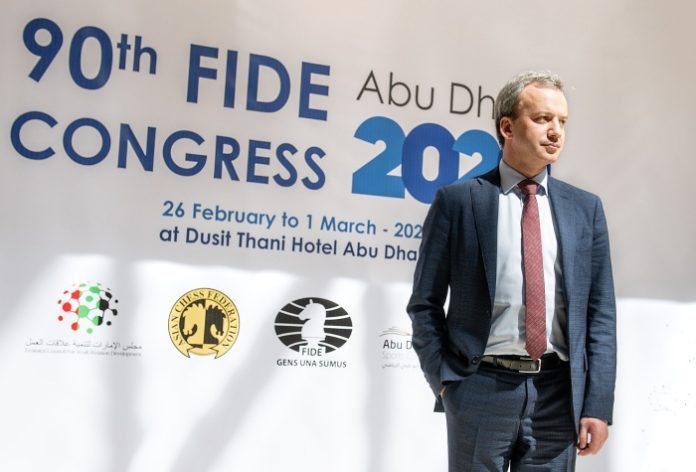 The 90th FIDE Congress started on the 27th of February 2020 in Abu Dhabi with the participation of 195 delegates from 195 countries, organized by the Asian Chess Federation.

Arkady Dvorkovich, The President of the International Chess Federation addressed and thanked the attendees of the 2020 FIDE Extraordinary General Assembly and Federations for their work, highlighting that FIDE is about to reach the 200-member federations milestone.

The 2020 FIDE Extraordinary General Assembly and Executive Board kick off with the Final Report from the Planning and Development Commission, led by Sonja Johnson, of which 77 Federations have already benefited from this funding program, totaling $ 1,1 million.

The Presidential Board meeting also started with FIDE’s Executive Director Victor Bologan presenting to the attendants the “Chess-ID” project, aimed at uniting all chess players, officials and other stakeholders involved in chess activities around the world, under one/unique FIDE umbrella.

This project is FIDE’s response to a serious issue: The lack of big data and global figures. The chess community needs to tackle this problem in order to access new sources of funding.

The Planning and Development Commission organized a federation management workshop. Marco Verdoia, who recently joined FIDE’s marketing department, gave a brief speech in which he highlighted the importance of brand-building.

The workshop also included some guidelines for how to pitch potential partners with an event sponsorship proposal.

From all of these, it looks like FIDE is on the right track, judging from the responses of audiences and fans.

Day three at the 2020 FIDE Extraordinary General Assembly Agenda and Executive Board Agenda begins with the Report of the FIDE Treasurer and the Financial Statements for 2018.

Regarding the 2024 Chess Olympiad, the FIDE President reports that Hungary and Argentina/Brazil (jointly) have expressed their interest in hosting this event. They haven’t submitted a bid yet but they sent a delegation to Abu Dhabi to gather information.

Yuri Averbakh, Khalifa Mohammed Al-Hitmi, and Maya Chiburdanidze have been elected FIDE honorary members, as a recognition to their career and their outstanding contributions to chess.