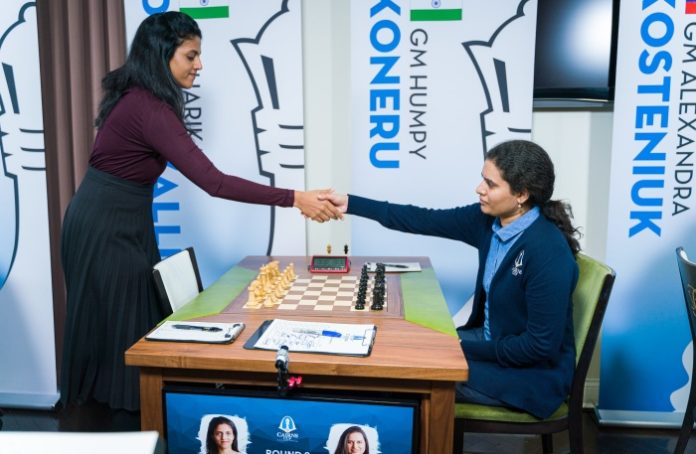 As the dust settled in a momentous final round, Humpy Koneru emerged as this year’s Cairns Cup Champion. She captured clear first with 6/9 points and will take home a sweet $45,000 in prize money. With all of the excitement seen throughout this tournament, it wasn’t a surprise that the final day offered even more drama with multiple storylines. In order to force a playoff, Alexandra Kosteniuk was in a must-win situation against Ju Wenjun. It wasn’t meant to be, however, as the reigning Women’s World Champion defeated Kosteniuk to finish in a clear second place. Meanwhile, Carissa Yip finished with a solid draw against Mariya Muzychuk. This caps off an incredible recovery for Yip who started the tournament with 0/4 but ended with 4/5. Hard-fought battles were seen in a number of other games as a lot of prize money was on the line.

While this encounter was hugely crucial for the standings, the game itself didn’t offer much bloodshed. A balanced Four Knights Scotch led to an opposite-color bishop endgame and the players agreed to a draw before I could finish my chai latte. In the post-game interview, Humpy Koneru explained her strategy: “I felt like I needed to just draw today to be risk-free.” The quick draw propelled Koneru to 6/9. With Kosteniuk falling to Ju Wenjun, the score was enough for Koneru to be crowned champion. Given her slow start to the event, Koneru explained that she didn’t have the highest expectations: “After my second round loss, I did not expect to make it to the top.” She also admitted to struggling with jet lag for the first half of the tournament. However, this didn’t stop her from playing some of the best chess in the field and rising to the top.

With Alexandra Kosteniuk fighting for a first-place playoff, and Ju Wenjun fighting for second place, this battle was hotly contested. The opening featured a Berlin Defense which doesn’t have the most exciting reputation. However, a fascinating strategic battle ensued. Perhaps caused by the high stakes and pressure, Kosteniuk lost her thread in the middlegame. Ju emerged in the driver’s seat with a dominating bishop pair. In the endgame, Kosteniuk’s pair of knights were not enough to survive against Ju’s two powerful bishops. With this victory, Ju leapfrogged Alexandra to finish in second place with 5.5/9. She takes home $35,000 which is $10,000 more than what she would have gotten if the game was drawn. Given yesterday’s defeat against Yip, the World Champion was pleased to finish strong. “After yesterday, I didn’t have many expectations. After today’s win, 2nd place is good.”

Having endured several disappointments and missed opportunities in previous games, Irina Krush finally managed to score a victory. Nana Dzagnidze unleashed the dynamic Benoni Defense and was clearly playing for a win with the hopes of earning more prize money. Krush was well aware of her opponent’s situation and played a remarkably clean game. She obtained a pleasant positional edge which quickly transformed into a brutal kingside attack. Her middlegame rook lift was particularly impressive, as she maneuvered one of her major pieces all the way from a1 to h4. In the end, Dzagnidze was defenseless to the American grandmaster’s countless tactical blows. In the post-game interview, Irina did not hold back her joy: “I’m just so happy today!” She went on to reflect on her overall performance: “I never felt like I was having a bad tournament from the point of view of how I was playing.” She also cited time management and calculation as clear areas she needs to work on. As Krush will seek her 8th U.S. Women’s Championship this April, she will have a couple of months to work on her game.

Although this game was not crucial for the top of the leaderboard, it did feature drama. Valentina Gunina achieved a completely winning position in the endgame, but was unable to convert. After a series of mistakes from Gunina, Kateryna Lagno came back from the dead to save the half-point. This game marks the end to a disappointing event for Gunina who finishes at the bottom of the standings with 2.5/9. As she won the event last year with 7/9, it goes to show how strong this tournament is. One’s overall form during the event is incredibly important and no game or winning position can be taken for granted.

Carissa Yip capped off an incredible second half to her event with a draw against the Ukranian superstar. The game featured a Classical Variation of the Caro-Kann where Yip was pushing for the advantage. After a few hours into the round, the legendary Garry Kasparov called into the liveshow and provided some insights about this game. He recalled his game against Anand from Linares 2003 as the middlegame structure was incredibly similar. Yip placed her kingside pawns in the same fashion as Kasparov and relished a pleasant space advantage. After a slight inaccuracy from the youngster, Mariya Muzychuk was able to equalize and the players soon agreed to a draw. As Kasparov has worked with Yip in the past as part of the Young Stars program, he voiced his thoughts on the young phenom: “If there’s the real talent it shows, and the last time I saw her at this session a couple of months ago in New York I was truly impressed.” Yip finished in a tie for 7th place and will take home $8,000. With this tournament performance, she is now the youngest player in the world top-50 live rating list for females.

With so many exciting games and storylines from this tournament, there will be a lot to reflect on. Many of the lessons for these top-level players can also be applicable for the casual viewers. All of the games and coverage can be reviewed at USChessChamps and stay tuned for many exciting events in 2020!