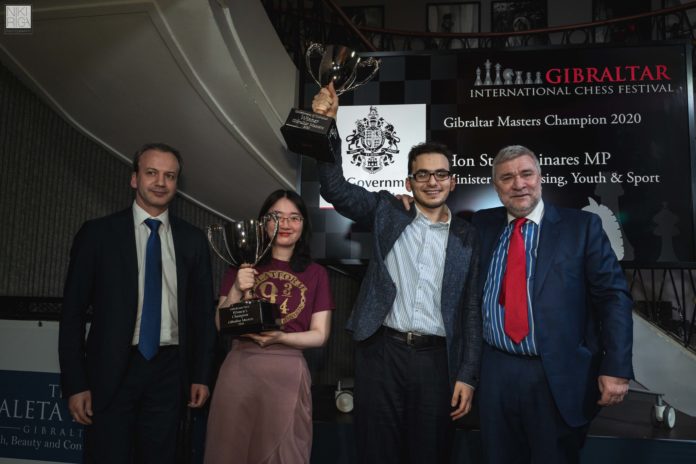 One of the best open competitions in the world, the Gibraltar International Chess Festival took place in the Caleta Hotel January 22-30. The festival included several tournaments in three sections: Masters, Challengers and Amateurs. More than 500 players from all around the world participated in the event this year.

The centerpiece of the festival, the Masters tournament, brought together 250 players including 7 top GMs rated 2700+. The event in Gibraltar is known for a very high level of competition and close fight to the very end and this year was no exception – the winner was determined in a rapid playoff.

The twelfth World Champion Anatoly Karpov was an honorary guest of the Gibraltar International Chess Festival. The legendary player gave a simul to local fans and later reflected on his career in an extensive interview taken by Tania Sachdev.

FIDE President Arkady Dvokovich visited the event for the first time in his life to watch the games, take part in the closing ceremony and socialize with organizers and participants in an informal setting. “I really love chess. Without this love, I would never go for the elections and this position. I like spending time with chess players and chess family – organizers, arbiters,” he told in an interview in which he shared his views on the future of the game.

The Masters event, a 10-round Swiss tournament, saw the rise of young and very young players with four of them finishing in the top 10. Before the last round, five players were tied for the first position with 7 points each, followed by a huge group of participants on 6.5.  In Round 10, none of the leaders managed to win, whereas three of their pursuers, namely Maxime Vashie-Lagrave, Daniil Yuffa, and David Navara scored very important victories over Parham Maghsoodloo, Andiban B. and Denis Kadric respectively.

As it is often the case in Gibraltar, the Masters tournament ended in a seven-way tie on 7.5 and the top four with the highest performance rating went into a rapid playoff for the title and the first prize (£30,000).

In the semifinals, Andrey Esipenko from Russia faced his compatriot David Paravyan whereas Daniil Yuffa took on the Grand Swiss’ triumphant Wang Hao. The Chinese GM dispatched his Russian opponent in rapid games 2-0 but Esipenko and Paravyan went all the way to the Armageddon-blitz in which David prevailed with White and advanced into the final.

In the first game of the final, Wang Hao got a certain edge in Ruy Lopez with white pieces but at the key point, he apparently underestimated Paravyan’s counterplay on the queenside. The Chinese GM sacrificed a knight to complicate matters but his Russian vis-à-vis cold-bloodedly fended off all the threats and converted his extra material in the ensuing endgame. In the second encounter, David found himself in an inferior position with White but managed to hold it with resourceful defense and became the winner of the 2020 Gibraltar Masters.