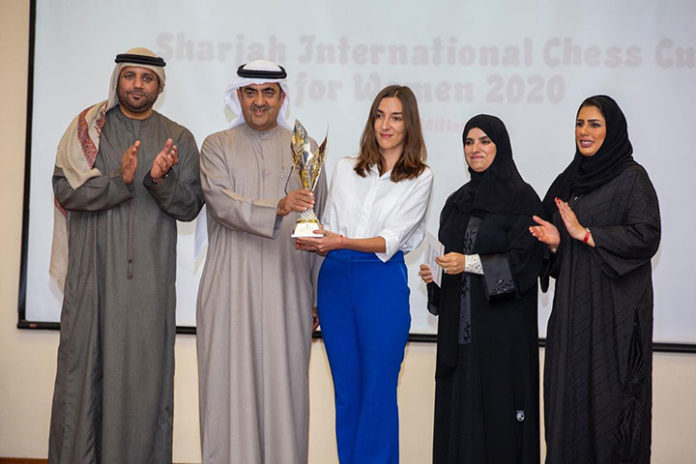 In the Arab Emirates, the tradition of women’s chess has been very important for years: Already the Sharjah Women’s Cup has taken place there for a decade.

Over 100 women from 34 countries took part in the tournament, which was played over nine rounds according to the Swiss system, from January 3rd to 13th, at the Sharjah Chess and Culture Club.

The Sharjah Chess Club claims to be the largest chess club in the world (presumably referring to the scale of the building) and it may well be. Founded by Sheikh Dr. Sultan bin Ahmed Al Qasimi, in March 2013, the main playing hall can accommodate 500 players. In addition to the two main rooms, there are numerous seminar rooms, offices and a library.

The prize fund for the 10th Women’s Chess Cup was a very generous USD $16,000, with the first prize of $3000. The ranking list by Elo was led by Irina Bulmaga (Romania) who took home the trophy, followed by Monika Socko (Poland), Irene Sukander (Indonesia) and Bibisara Assaubayeva (Kazakhstan).