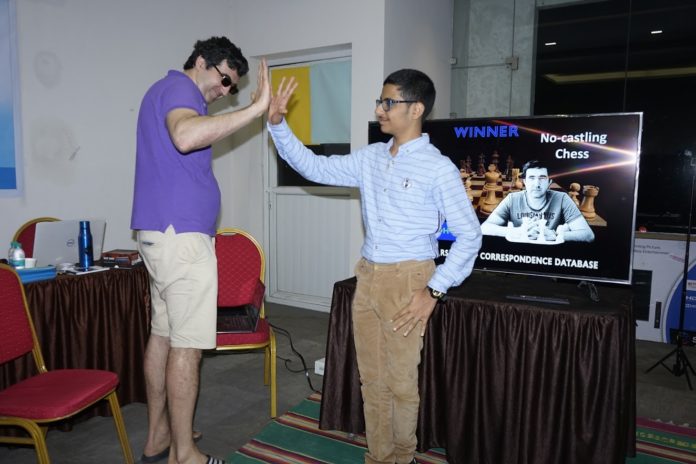 Vladimir Kramnik suggested the idea of No-Castling chess a couple of months ago. All the rules of chess remain the same, just that both the players cannot castle. How does removing this one rule alter the game? Well, we decided to put this idea to test by getting 13 of the strongest Indian youngsters (average Elo – 2457) and holding the first-ever No-Castling chess tournament at the Microsense Kramnik Gelfand Training camp in Chennai. It was a hard-fought event with GM Raunak Sadhwani winning it ahead of many other talents. The most heartening thing to see was the number of fighting games! Out of the 27 games played, 24 of them ended in decisive results with only three draws. We bring you a comprehensive report with all the games, videos, analysis by Sagar Shah and some brilliant photos by Amruta Mokal.

A couple of months ago, 14th World Champion Vladimir Kramnik suggested a variant of chess where all the rules of the game remain the same – only both players cannot castle! It was not just a random suggestion. Kramnik had done his homework. Working with DeepMind’s AlphaZero, he had come to the conclusion that the games remain interesting and we are able to avoid theoretical discussions. The main point as Kramnik mentioned was to get rid of theory in chess. If you play a theoretical line in no-castling chess, it is quite possible that after 15 moves you realize that this line is absolutely no good because you just cannot castle anymore! It was something exciting and new, and so on the rest day at the Microsense Kramnik Gelfand Training camp, we decided to hold the first-ever no-castling chess tournament.

The training room was converted into a playing hall! | Photo: Amruta Mokal

Executing a no-castling chess tournament is simple. From the point of view of implementation, you don’t have to do anything special. Players don’t have to learn any new rules, they just don’t have to castle. For eg. if you played the Fischer Random chess, you need to actually learn how castling works, how should the initial positions of the pieces be determined, how should the games be saved later for sharing with the viewers and many more issues. No-castling chess is oblivious to these!

After five days of intense training, Kramnik and Gelfand decided they and the students needed some time off. The trainers decided to go on a short trip to Mahabalipuram. It’s just a 30-minute drive from the camp venue. They decided that they would come back around evening and witness the no-castling chess tournament. We decided to plan the event in a way that when Kramnik and Gelfand would be back, they could see the finals! The format decided was knock-out and to make it more exciting ChessBase India instituted the prize fund of Rs.20,000 and three autographed DVDs. The winner was to get Rs.10,000 and a signed copy from Kramnik and Gelfand of Correspondence Database 2020. Second place was Rs.5,000 and a signed copy of Fritz 17 and third was Rs.3000 and a signed copy of Mega Database 2020. We also had a special best game prize of Rs.2000.

The pairings of the first ever no-castling chess tournament!

As we had 13 players the top three seeds got byes in the first round. Each match between two players consisted of two games of 5 minutes + 3 seconds increment. If the scores were tied at 1-1 then an Armageddon would be played with white having five minutes and Black four with draw odds for Black. The event had five GMs, six IMs, one WGM and one WIM! An average rating of 2457! This was a group of competent players who were going to indulge in a variant that would tell us more about its viability.

Before you read the tournament report, I would like to acquaint you with a game that shows the virtues of the No-Castling chess.

It was the Armageddon game of the Quarter finals between Arjun Kalyan and D. Gukesh. Vladimir Kramnik, the man who suggested the No-Castling variant, makes the first move! | Photo: Amruta Mokal

The game began with the well known Meran variation!

Nothing unusual until now! Both players are happy making the normal moves!

Gukesh, who had the black pieces, was happy that as Black he had got in this break and activated his b7 bishop

In normal chess, this would without doubt be a better position for Black. He has a great pawn structure and White’s doubled f-pawns plus the king on f1 would give him huge headaches in normal chess. But the No-Castle chess is a different beast. The main reason being the black king on e8 is not at all safe!

Bxf5!! A powerful strike by Arjun! White sacrifices a bishop to open up lines towards the black king

This is where the real difference between normal chess and No-Castling chess is clearly seen. In normal chess, Black would 0-0 and after f4 go Qb7! and then save his knight when the game is over. In No-Castling chess the king has nowhere to run. It is stuck in the center. Kudos to Arjun Kalyan for recognizing this and sacrificing his bishop!

One rook covers the d-file, the queen covers the f-file, the other rook is coming to the e-file to deliver checkmate!

Gukesh resigns the game and Arjun goes through to the semi-finals | Photo: Amruta Mokal

Kramnik is pleased with the quality of the game! This game perfectly showed why playing theoretical lines in No-Castling chess can often backfire! | Photo: Amruta Mokal

GM P. Iniyan faced youngster Raahil Mullick in the first round. Iniyan proved to be stronger and managed to win without too many problems with a score of 2-0 | Photo: Amruta Mokal

It is praiseworthy that Aditya who is suffering from a recent accident did not let his injury come in way of participating in the event. He played online via PlayChess.

The battle between two youngsters Bharath Subramaniyam (left) and Sreeshwan Maralakshikari ended in the favor of Sreeshwan who won 2-0 | Photo: Amruta Mokal

Raunak Sadhwani won game no.1 with ease, but in the second game, Rakshitta missed a certain win to level the scores. Raunak advanced with 1.5-0.5. | Photo: Amruta Mokal

Praggnanandhaa, the top seed and the only player with a 2600+ Elo, faces Aditya Mittal. Pragg’s game is followed by Akhil and Aruna Anand who visited the venue. Pragg won 1.5-0.5 | Photo: Amruta Mokal

Sreeshwan lost his quarter finals against Arjun Erigaisi with a score of 0-2 | Photo: Amruta Mokal

The most intense match of the quarter finals was Arjun Kalyan vs D. Gukesh | Photo: Amruta Mokal

Gukesh struck in the first game and won his game with the black pieces.

The game went into an armageddon where Arjun had the white pieces and was in a must-win situation. We already have seen the game at the start of the article. Arjun won the game and set up a semi-final clash against Arjun Erigaisi.

Raunak Sadhwani against Praggnanandhaa was an encounter that was very exciting! | Photo: Amruta Mokal

Raunak’s superior understanding of the openings in No-Castling chess and also his subtle handling of the middlegame positions gave him a 2-0 victory over the top seed Pragg.

The interest generated by Raunak and Pragg’s game was immense! | Photo: Amruta Mokal

A 2-0 win for Raunak gave him a berth in the finals. Which of the Arjuns was going to be his opponent?

Arjun Erigaisi is 100 points stronger than Arjun Kalyan and was definitely the favorite in the match, but in No-Castling chess, the ratings mean very little. Arjun Kalyan managed to capitalize on Erigaisi’s every error and won the match with a score of 1.5-0.5. Game one ended in a draw, while the second game ended in a win for Kalyan.

The battle for the third place:

The battle for the third place was between Arjun Erigaisi and R. Praggnanandhaa. It was clear that Pragg was not in his best of forms chess wise and also health-wise. On the next day, he even pulled out of the camp because of a high fever. He lost his match 2-0 against Arjun Erigaisi.

The much-anticipated finals were between Arjun Kalyan and Raunak Sadhwani. After beating Iniyan and Pragg, Raunak was definitely a favorite, but Arjun too had played excellent chess eliminating not just Gukesh but also Arjun Erigaisi. In the first game, it seemed like Kalyan would take home the full point.

Kramnik, Gelfand, and Kailasanathan look on as the finals are in progress! | Photo: Amruta Mokal

Arjun was a pawn up and clearly better. He was unable to breakthrough and at some point, it was just prudent to accept the draw. Under grave time pressure, he blundered and Raunak picked up the full point.

Raunak never really was in any danger in game two and it ended in a draw, giving Raunak the title of the first-ever No-Castling Tournament Champion!

A high-five from Kramnik for winning the first ever No-Castling chess tournament! | Photo: Amruta Mokal