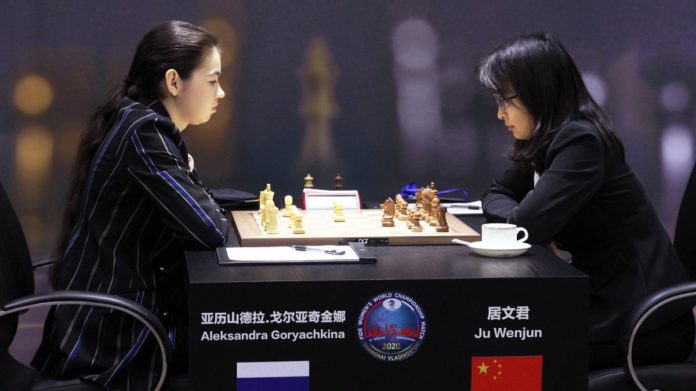 The Women World Champion title battle between two greatest women chess, Ju Wenjun, and Aleksandra Goryachkina continues in Shanghai with a record-breaking prize fund on the line. The 500,000 euros prize fund is probably the largest in the nearly 100-year history of the Women’s World Championship. One might even say that this was inspired to close the gender gap in the game of chess.

The International Chess Federation (FIDE) calls it is a significant moment for women’s chess, which is long overdue has been overshadowed by the publicity and participation of men in chess. According to FIDE, the format of the competition has been changed to mirror the World Chess Championship, which is theoretically open to all but has been dominated by men. “We are trying to increase the prestige of the women’s game and also close the pay gap with the men,” said Nigel Short, once one of the top-ranked players in the world and now FIDE vice president. The boost women’s chess came with the election of Arkady Dvorkovich as FIDE president in October 2018, who is a former deputy prime minister of Russia.

Over the years there have been many complaints from women chess players about the format of tournaments, and the prize money. Although 500,000 euros for the Women’s World Championship match is still only half of the World Chess Championship prize fund which was 1,600,000. Hopefully, and with the proper push, women will earn close to what male world champion in chess earn.

With hope, this development would also affect positively the value placed on women’s chess games. Still, the success of the effort to place value on women’s chess will depend on the interest of women, not just as chess players but also as coaches and arbitrates. Presently the chess world is more dominated by men.

Perhaps, striking a balance would further improve women’s chess game. Chess, after all, is a mind strategic game and not a physical one, which leads me to the conclusion that nothing is stopping female domination and participation.