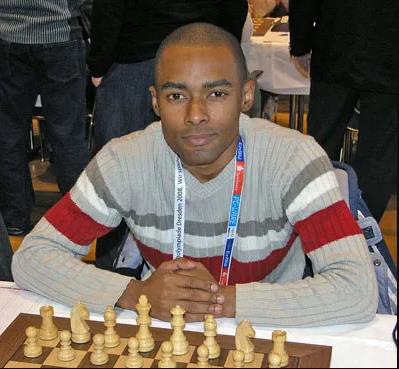 Can you believe it’s been five years already? At that event he also secured his fourth norm and I think his victory over GM Adly was one of the best games played there.

The event was held at Claremont chess club in Rondebosch, representatives from various chess clubs came to the event and it was good to see the interaction of the guests with Grandmaster Kenny. I noted representatives from Cape Town chess club, Steinitz, UWC, SAPS, Elsies River, the library sector, CPUT. Mitchell’s Plain, MRL, Manyanani, Stellenbosch, Grassy Park and others.

The event was opened by WP president Mr. Eugene Steenkamp. He presented GM Kenny with a Western Province blazer which he can play in when he participates overseas representing South Africa and the Cape Town district. Mr. Steenkamp also noted that this event would serve as a capacity building event. This year in WP there were capacity building events for arbiters, tournament players and trainers.

GM Kenny noted that in Kasparov’s book how life imitates chess, Kasparov noted that a players rating reflects his level of chess history. While it is of course, beneficial to look at the modern game players need to understand chess.

Nowadays according to GM Kenny, players switch on the engine and note that this is a clear plus or better for white without understanding the reasons for the assessment. Every generation must study the previous generation and the classics.

GM Kenny then used the game Botvinnik vs Sorokin from the 1931 USSR Championship to illustrate various principles. The audience was requested to give their move in certain positions and their reasons for their preferred move. In this way GM Kenny was able to point out what were flaws in their reasoning or possibly better alternatives.

Everyone thoroughly enjoyed the evening and at the end various questions were posed to GM Kenny. One important question was whether it was important to belong to chess clubs. GM Kenny pointed out that every Chess player should belong to a chess club as the club becomes part of his family. You learn from stronger players. You will also learn from the older players even if they not stronger. It provides an institution to tell you about chess, when tournaments will happen and what you need to qualify for etc. Kenny was part of the Mitchell’s plain chess club that won the WP league three times. He also played team chess for WP at the Interprovincials.