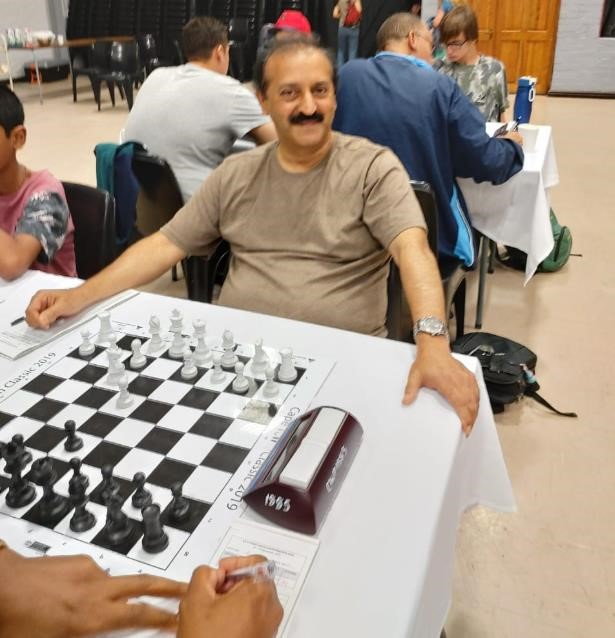 The 9th round can safely be characterised as a bloodbath. Pieces were flying all over the place and some positional niceties were also seen!!

Let’s have a look at the Open section.

Daniel Barrish played a lovely positional in the style of the Old Masters. He accumulated advantages and slowly nursed his advantage to a winning endgame. A game worthy of study as Paul Gluckman put up some credible opposition.

Keith Khumalo held GM Kenny to a draw. He played well (although I think sometimes too fast) by the game went beyond ninety moves!

Ben Hercules will savour the victory against Watu Kobese. Although Ben is having a bad event, he showed that he doesn’t have to stand back for anyone.

Calvin Klaasen lost to Roland Bezuidenhout who played a nice game. Roland will certainly savour his victory and he is a player to watch in future at the Closed.

Michael James beat Roberto De Abreu. An interesting knight ending emerged in which Roberto tried to stop two pawns. Michael ended the game with a neat little trick at the end! Check it out.

The game of the round for me was Matt Pon versus Mohammed Bhawoodien. When I watched the game in between the rugby I thought Bhawoodien was having it easy with a nice attack against Pons king. Pon however consolidated and then trapped that queen that came to attack him earlier. Bhawoodien however never gave up and in an ending of rook plus three connected pawns versus two knights, bishop and rook pawn he held the draw. At the end of the game both players looked visibly upset with themselves because both had victory in their grasp at certain stages.

Let’s look at the standings;

Daniel Barrish is leading with 6.5 and needs to play GM Kenny Solomon and Matt Pon in the final two rounds. So, he is in good position to secure qualification for the Olympiad team.

Mohammed Bhawoodien is lying in second with 6 and needs to play Watu and De Abreu in the last two rounds. So, no easy assignments in this one!! It is going down to the wire!

GM Kenny and Matt Pon will still like their chances and the final two rounds will be very exciting!

In the Women’s section

Nine Marais played a stunner of a game when she sacrificed her queen for three pieces against Fisher and outplayed the queen!

Laubscher showed that she shook off the loss of yesterday and beat Rebecca Selkirk.

While Joubert continued to show a resurgence with a win over Engelbrecht.

Du Plessis and Grobbelaar ended in a quick draw.

The crosstable shows that February and Van Niekerk are in the lead.

February has to play Laubscher so it will be a tough game with Van Niekerk still needing to play Nina Marais. So, all still to play for.

In the senior section

Meiboom showed some resurgence with a good victory over Southey.

The crosstable reveals that Maxwell Solomon is on 8 and Southey and Lewis are on 6.

After tomorrow the event may effectively be over if Maxwell should win.

In the B Section

Dr Bhawoodien is showing his maturity and is outplaying the B section players.

Bhawoodien beat Sikwati in a well-played attack. He is still in joint first with Kenny Willenberg who also beat David Baxter.

I shall look forward to the games tomorrow.

Let’s wish all the players well for four pm tomorrow.