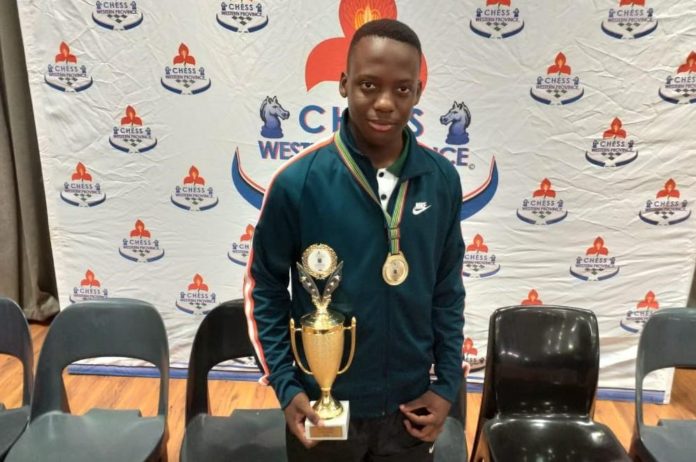 We have now passed the halfway mark of the 11 round event and it is now time to stack stock of the leaderboard.

In joint first place is Daniel Barrish and Mohammed Bhawoodien. Both players have 5/7 with only Bhawoodien being undefeated with his three wins and four draws. Barrish is 19 and is already playing his third SA Closed. Mohammed played his first Closed in 2013 and this is his fourth Closed.

Barrish seems to have the easier run in to complete the last four rounds but what we have seen in this event is that there are no easier games. Back markers play their heart out to show that they deserve to be here. So, the heat is on. Will Barrish and Bhawoodien be able to hold off Mitchell’s Plain Grandmaster Solomon? That will be the true test.

In the women section Robyn Van Niekerk is leading by a half point on 5.5/7 from Rebeccah Selkirk 5/7. There is a bunch of players on 4.5 so things can still get pretty interesting as all the women are capable players and can pull off wins when required. WIM Jesse February suffered her first loss in the event against WIM Charlize Van Zyl so she will be aching to show that she wants to defend her title.

In the Senior section CM Maxwell Solomon is dominating the field with 6/7. He only has two draws to his credit with the rest being wins. He is in a class of his own. Dr Southey has already made the over 65 SA Title his and just needs a point in the last four rounds to be assured of that title. The over 50 and over 65 world team event starts in The Czech Republic on 5 March 2020. Registration for entries close on 20 January 2020 so Chessa needs to get their ducks in a row if they intend sending a team. I note with interest that after seven rounds that CM Solomon, Dr Southey and Mark Lewis who also has 5/7 are all unbeaten in this section.

In the B section Kenny Willenberg and Cavan Jacobs both have 5.5/7 going into the last rounds. FM Bhawoodien had 4.5 and together with Sikwati and Mncwabe. The winner of the B section qualifies for the A section if they reach rating of 2050.

The Under twenty girls have completed their event and the prize giving was held last night with the Medal Sponsor Mr. Rashied Essop in attendance. Congratulations to Nicola Putter.

The U20 girls winners

The event was completed as no more unique pairings could be produced. The final standings:

Dr Andrew Southey was stuck in traffic earlier this week and he sent me the following note:

George Bernard Shaw said chess is like life. Bobby Fischer said chess is life. Pampolfini said chess is not life, it is far more important. With the latter in mind one can understand the distress I endured yesterday. The morning went well and I went through a game I played against Roland 2 years ago.

He plays the Paulsen, Kan, Taimonov, type of Sicilian and I had a good victory. He is a big guy and if it was a physical battle he would fall on me and I would be a statistic. But this is chess and the purpose is to dispose of your opponent with whatever brutality necessary. In the playing hall it is sedate and those that wonder around look through each other, sometimes a suppressed gesture of recognition. I imagine a bit like a ward at an institution with all on Prozac. It disguises all the effort and preparation that goes into the intent to violently take your opponents apart over 11 days. Nothing else matters in the outside world, only that Eskom will last until the end of the SA tournament. Traveling time over the past 2 days had been a comfortable 40 min and so to be safe I left Hout Bay 70 minutes ahead of start. By the time I reached the Waterfront I had 30 minutes left. Thought I should still make it. But alas 4 lames on the N1 at snails pace. Got to off ramp Old Oak Road and my clock would be ticking. But we are allowed 30 minutes grace before default. With power out traffic had backed up onto the highways and now it got seriously slow. Passed Stodels nursery eventually with quite a few kilometers to go I was not going to make it and my stress levels were now off the scale. No kerb on the right I put my hazard lights on and went against the sparse oncoming traffic. And so I ducked and weaved for the next few km. With 4 minutes left the TD phoned to find where I was. Put Roland on the phone who offered a draw if I did not make. Great gesture but this is the guy I needed to take apart being nice to me. I stopped at the entrance and ran in and played a move. Then went and parked my car. So adrenalised I walked around for another 15 minutes to calm down. Nearly half my time gone. Another 4.5 hour game ended in a draw. Roland said I missed the win, but I think by then I was so bushed. Mixed feelings, like I wanted to win but with his sportsmanship a draw would be the right thing.

The event is being held at Curro school in Durbanville. The school is one with a rich pedigree of chess history. Curro is currently the U18 WC top schools champion and won many national top school titles. Many students have obtained WP and Protea colours and quite a few of them are also playing in this event!

The 8th round was a fairly dramatic round yesterday. Watu Kobese beat Michael James while Keith Khumalo held Daniel Barrish to a draw. Calvin Klaasen lost to Paul Gluckman. The big game of the round in the Open section was the game between Mohammed Bhawoodien and GM Kenny Solomon. The game lasted well over five hours and I thought Bhawoodien was going to win as he was pressing hard and had two passed pawns on the queenside. GM Solomon had just enough juice in his tank to secure a draw. Roland Bezuidenhout and Roberto De Abreu drew their game while Matt Pon continued his good run with a win over Hercules.

In the Women’s section Robyn van Niekerk beat Dantelle Joubert. Joubert played well and Van Niekerk had to pull out all stops to secure the win. February beat Nina Marais while Michelle Fisher had her best game of the event when she beat Charlize Van Zyl. Rebecca Selkirk beat Jacqui Grobbelaar. In a dramatic game Hanri Engelbrecht beat Anzel Laubscher. The game was pretty interesting and full of drama.

In the B section FM Shabier Bhawoodien beat Kenny Willenberg to go joint top. So, for the first time in SA Closed history a father and son are joint leaders of different sections of an event!! Show me in which other sporting code one can get this!! Remember if Shabier Bhawoodien wins the B section he stands a good chance of qualifying for the A section if he maintains his rating.

In the under twenty Open section CM Banele Mhango won the event with 8/11. Ethan Samuels was second followed by Keegan Agulhas. Luan De Jager and Yaduvir Govender also had 6.5 with only the tiebreak separating them.

The schedule for the remaining rounds is;

See you at Curro Durbanville.