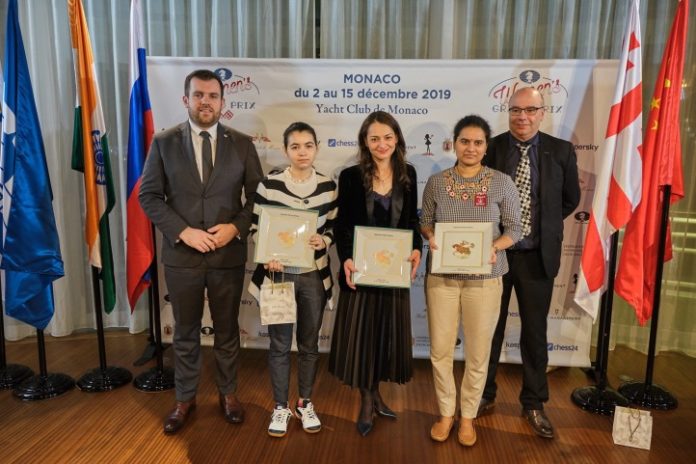 The final day of the Women’s FIDE Grand Prix could not be more thrilling. Humpy Koneru beats the leader Aleksandra Goryachkina in the top game of the round and allows Alexandra Kosteniuk to clinch the title thanks to better tiebreaks, as the former World Champion defeats Elisabeth Paehtz.

The Women’s FIDE Grand Prix at the Yacht Club de Monaco witnessed a scenario worthy of the most exciting Hitchcock movies. Aleksandra Goryachkina went into the last round with a full-point advantage over Humpy Koneru and Alexandra Kosteniuk. However, the Indian had her fate in her hands, as she played against the leader with the white pieces. Koneru uncorked a fine opening idea against the Semi-Slav opening, which took Goryachkina by surprise. The Russian did not react precisely by sacrificing a pawn, as her only prospect was a difficult defense with opposite-colored bishops.

The presence of heavy pieces made her task too arduous, and Koneru won a neat technical game. As a matter of fact, the Indian would have earned the trophy if Kosteniuk had not won her encounter with Elisabeth Paehtz. But the former World Champion produced a fine performance and won convincingly. Koneru and Goryachkina had been taking turns leading the event, but the trophy eventually went to Kosteniuk thanks to the better tiebreak – direct encounter, followed by the number of wins.

The Russian had an incredibly successful fortnight in Monaco, as FIDE Vice-President Lukasz Turlej pointed out in his speech at the closing ceremony: “Alexandra Kosteniuk took it all! She brings home from Monaco the title of the Women’s Grand Prix, as well as both titles of European Rapid and Blitz Champion”. In a final interview, the Monaco winner said: “After my ups and downs in the first half of the tournament, I have never expected to even be able to fight for the first place. Only before the last round did I realize that I still had a small chance”.

Kosteniuk takes home the trophy, but the Grand Prix points and prize money are shared among the three players. Thus, Humpy Koneru remains in the lead of the Grand Prix race, ahead of Aleksandra Goryachkina.

Kateryna Lagno finished fourth in Monaco thanks to her last-round victory over Pia Cramling, whereas Anna Muzychuk took the fifth place after a draw against the tail-ender Valentina Gunina.

The next stage of the Women’s FIDE Grand Prix will take place in Lausanne between March 1st and 14th 2020.