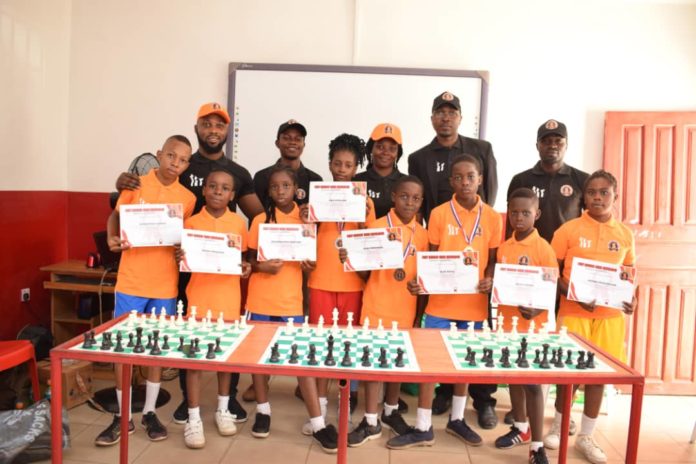 Piety Instinct Chess Knowledge whose sponsors and organisers are in ‘The United Arab Emirates’ held an Intra school event on the 6th of December 2019 at Emplace college, Oba-ile, Akure, Ondo state by 10:00hr prompt. The master of ceremony (Mr. Adewa Emmanuel) commenced the event with an introduction of names and event schedule.

Emplace college is a pro-active institution that is missioned ‘to help todays learner become the leaders of tomorrow’, it was no surprise to see the passion and intelligence of kids on board.

Mr. Awote Ayokunle (chess Instructor) led a prayer session while the vision and mission of PICK was shared by Mr. George Omojola (chess Instructor) which is to spread chess, morality and technology to kids and youths across Africa and the middle east region. Mr. George educated the kids about the benefits of learning chess with PICK which includes but are not limited to Pick Support Program (PSP) a loyalty program, Chess Education Technology

Awareness Program (CETAP) and others. This was first of its kind in Ondo state where great talents are featured to project the theory and skills of chess both national and internationally

The kids were highly motivated, the presence of Dr. Damilola Oshin (The Proprietor) and Mr. Seyi Akinso (The director) added more inspiration to their winning mentality. CM Akinleye Akinseye (Pick Advsier) explained the relevance of chess from building human psychology, philosophy, morals and a means of strategic planning to proper judgement and decision evaluation in real life experience(s).

A chess video for physically challenged was played to audience to facilitate the need for responsibility, reliability and respect for one another.

Ms. Blessing Fajugbagbe (PICK co – founder) addressed the kids on the rules and regulations of the event. Eight (8) groups were distributed for the Quiz section, the first stage of the event. It took three rounds before the winner (Group 8) emerged. In the Fastest Finger game which allow players individually arrange a chessboard before their counterpart, Johnson Malik emerged winner and won a PICK face cap for himself.

The puzzle competition followed afterwards, and winners emerged; a cumulative score was generated based on their scores which placed group eight (8) on first, group five (5) second, and group (6) third.

The last phase of the tournament featured an exhibition of a simultaneous game (Round Robbin) championed by CM Akinseye Akinleye (Popularly called Akinov) against the group heads.

Every effort was in place to win the CM by the wonder kids, but it was almost enough. They learnt from their strategic mistakes and the CM shook and appreciated their efforts.

After a successful event and dramatic display of intelligence from the proactive kids, it was time to crown their efforts, to cheer motivation and keep them hungry for more wins. As such, medals were presented to the top three as below;

The group leaders were presented certificates of recognition and a PICK T shirts.

We must remark that the event was emphatically a masterclass; the school administrators and PICK Crew were all delighted for the satisfaction of the event. Ms. Blessing Fajugbagbe (Director of Business Management/co-founder) gave a vote of thanks and everyone was highly impressed.