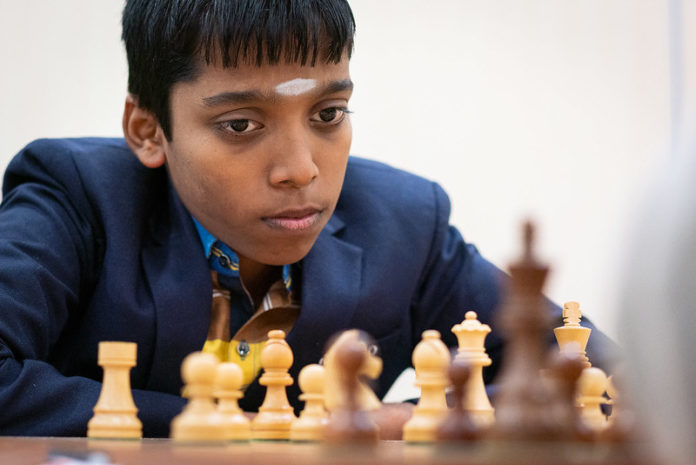 On 4th of May 2019, Nihal Sarin had become the youngest Indian to cross 2600 at the age of 14 years and 10 months. It took only seven months to break this record when Praggnanandhaa, won his seventh round game at the London Chess Classic FIDE Open 2019 against GM Jules Moussard (2600) to move to 2602. Pragg has achieved the feat of crossing 2600 at the age of 14 years, 3 months and 24 days, making him the youngest 2600 ever in Indian chess history and the second youngest in the world. In this report we bring to you the game that helped Pragg cross 2600 with detailed analysis and also quotes from his trainer Ramesh. Truly, a big moment for Indian chess!

Have a good look at this rating graph! This is the rating graph of R. Praggnanandhaa – one of India’s biggest chess talents. In spite of being one of the finest minds around in the world of chess, people dubbing him as the future world champion, Praggnanandhaa had to face the rating graph being horizontal (hardly any upward movement) for nearly two years! From September 2017 when he crossed 2500 to July 2019, Pragg had only reached a rating of 2540. But in the last four months, the boy has picked up speed and has moved from 2540 to 2600 and has now become the youngest Indian ever and the second youngest in the world to cross 2600 on the Elo scale. His coach R.B. Ramesh said, “Praggnanandhaa went through a rough patch after becoming GM and his rating was not going up faster for few months. There was lot of negative criticism going around. But glad he kept the belief in himself and has come out stronger in the process.”

In the seventh round of the London Chess Classic FIDE Open Praggnanandhaa managed to beat Jules Moussard (2600) and crossed 2600 on the Elo scale. He now has a live rating of 2602! | Photo: Lennart Ootes

After the sixth round we had three leaders on 5.5/6 – Praggnanandhaa, Aravindh Chithambaram and Anton Smirnov. Aravindh and Anton drew their game on the top board. On the second board Praggnanandhaa with the white pieces was facing Jules Moussard. He needed to win in order to take the sole lead in the tournament and also to cross the 2600 Elo mark.

Pragg is performing at a massive Elo of 2811!

Second youngest 2600+ GM in the world

We have been following Pragg’s journey since 2014 when he was just 9 years old and rated 2000. Five years later he has now broken the 2600 Elo mark! Now that’s some pace of improvement! The above picture was taken by Amruta at the World Juniors in 2014.

The only two Indian youngsters who have crossed 2600 at the age of 14 – Nihal and Pragg | Photo: Amruta Mokal

Does this also make Pragg the youngest 2600 in the world? The youngest chess player to have crossed 2600 is John Burke from USA. But somehow his achievement cannot really be taken seriously as John jumped from 2258 in July 2015 to 2603 in September 2015 with a k-factor of 40. The second youngest player in the history of the game to have crossed 2600 was Wei Yi, who did it at the age of 14 years, 4 months and 30 days. Pragg bettered Wei Yi’s record.

Pragg after recently winning the world under-18 title with his mother and coach R.B. Ramesh | Photo: Amruta Mokal

Ramesh mentions a very important factor that has helped Pragg improve as a player – “I must say his parents and sister Vaishali are a major source of strength to Pragg. Even when he is going through rough patches, his parents never give suggestions on how chess should be taught to him like most modern day chess parents do. In the last few years, I get lot of suggestions from parents that their child should be taught this particular opening, my child is weak in endgames, my child gets good position but spoils it later, my child is immature, my child is weak in so and so areas etc. The list is limited only by the creativity in the head of the parent to invent a negative attribute in their child. Luckily, Pragg was given the freedom to pursue his passion in his own way. I was also given the freedom to teach Pragg in my own way without any interference. I must thank his parents for that.

Pragg’s father who doesn’t travel with him to tournaments, but follows each and every game right until the very end from his home in Chennai | Photo: Sagar Shah

A big credit for what Praggnanandhaa has achieved goes to Ramco Systems. They have been supporting the youngster for nearly three years now, since he became an IM!

One of the big advantages for Pragg is to have two elder brother-like figures back home in Karthikeyan Murali and Aravindh Chithambaram. Both Karthikeyan and Aravindh have surpassed 2600 since quite some time and are more experienced than Pragg. Says Ramesh, “Pragg learns a lot from GM Aravindh and GM Karthikeyan Murali. When they are in Chennai, they work together and this arrangement is mutually beneficial to all.”

In August 2019, Pragg worked for 10 days with the 14th World Champion at the Kramnik Microsense India Chess Program. This has definitely helped Pragg to become better. | Photo: Amruta Mokal

Speaking to ChessBase India, GM Jacob Aagaard, who has worked with Praggnanandhaa in the past, said, “Praggnanandhaa is a wonderful child with a great sense of humour and a joyous existence. Vaishali is a quiet personality, but she is incredibly likeable. I feel happy to call them my friends. I have had some experience dealing with their parents and you can easily see why the kids are so great. They are raised well, with a combination of love, kindness and firmness needed for a child. Basically, the parents are good at saying no with a smile, when they need to.” Aagaard also feels that one of the main reasons for Pragg’s development is the excellent environment that Chess Gurukul and Ramesh have created back home in Chennai – “When you look at other kids from ChessGuruKul, like Manish, Divya, Bharath and of course the amazing Karthikeyan and Aravindh, you see an environment of joy, where the kids feel free and safe, but at the same time challenged to develop their potential, lead to extra-ordinary results.”