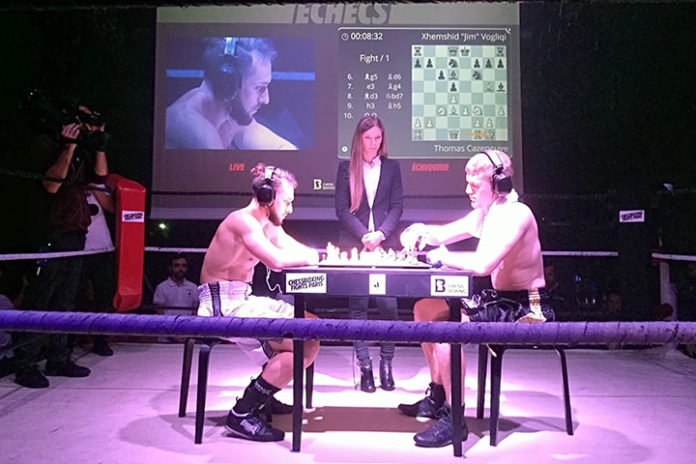 Chessboxing has spread to France. The hybrid sport which combines alternating rounds of blitz chess and boxing has been popular in London and Berlin, and now the first official bout has been held in Paris.

Chessboxing arrived in France with great fanfare as the first official event was recently held in Paris. The spectacle consisted of three fights in the sub 70 kg, sub 75 kg and sub 85 kg categories. Hundreds of spectators enthusiastically cheered the combatants not only during the boxing bouts but also during the chess rounds.

In chessboxing, one can win by knockout or by checkmate, whichever is delivered first. A fight’s result can also be determined by the judge’s decision or if a player exceeds the time limit on the chess clock. A fight consists of eleven alternating rounds of chess (six) and boxing (five) with each round lasting for three minutes. For the chess part, each player gets nine minutes on the clock.

The evening kicked off with the sub 70 kg category encounter between Paul Ducher and Kevin Guedj. It was a thrilling contest with Ducher trying to knock his opponent out in boxing while Guedj was trying to convert a decisive advantage on the chess board into a victory.

In the fifth round (of chess), Guedj was on the verge of an easy win after being up a queen and a rook. But, before he could convert his advantage into a win, the bell rang signalling the end of the round. Ducher couldn’t let the chess game resume. He escalated the boxing battle in the sixth round and won by a technical knockout after delivering a flurry of punches that made the referee stop the fight in his favour.

In the sub 75 kg category, Thomas Cazeneuve gave a display of impressive attacking chess as he delivered a checkmate against Xhemshid Vogliqi on move 44.

The sub 85 kg fight was won by Jules-Alois Julien after his opponent Oleksander Zozulia’s corner threw in the towel in the sixth round. This was after Julien pounded Zozulia with a barrage of punches. In their chess encounter, Julien had a slight advantage after being up an exchange.

Among those present to witness the event was the French artist Enki Bilal, who introduced the concept in 1992 in ‘Froid Equateur’ (Cold Equator), a comic book about the future and new societies.

“I wanted to find a sport which would represent the highest and the best of human possibilities. For me chess represents intelligence and boxing represents not just strength but also intelligence as you need to have strategy in it too. I think chess and boxing match very well,” he said.

French Grandmaster Laurent Fressinet, who was attending a chessboxing event for the first time, said he thoroughly enjoyed the spectacle.

“It was very exciting. I find the combination of these two games extremely interesting. For example, in one of the fights, a player probably lost because he opted to just defend and keep it safe in boxing after obtaining a winning position in chess. But it’s very difficult to play it safe in either boxing or chess. If you play passive moves in chess your position will go down,” he said.

The event was organized by the Chessboxing Federation of France which was founded by Guillaume Salançon early this year.