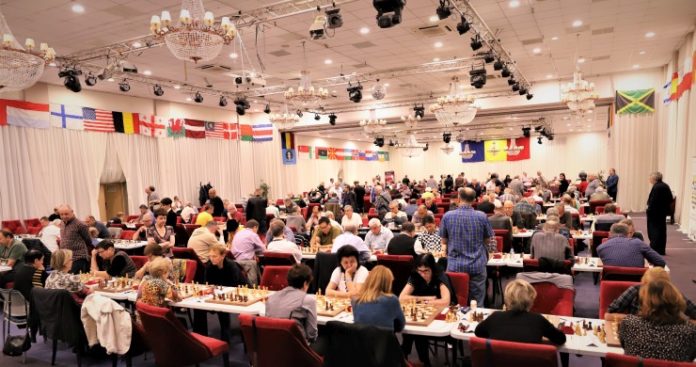 With just three rounds to go, the World Senior Chess Championship in Bucharest, Romania, is on the home stretch.

This year all four veteran tournaments (Open 50+, Men 65+, Women 50+ and Women 65+) can boast of very strong lineups. The main reason behind this impressive turnout is FIDE’s decisions to increase prize funds and cancel fees for the participants.

Kiril Georgiev, a well-known Bulgarian GM playing under the banner of Northern Macedonia tops the rating list in Open 50+. The semifinalist of the World Blitz Championship 1988 (he beat Garry Kasparov on the way) hasn’t suffered a single defeat yet, but with 6 points out of 8, he is just tied for the third. The top two lines in the standings are occupied by a “young” (only 50!) grandmaster Vadim Shishkin from Ukraine (7 out of 8) and Vladislav Nevednichy from Moldova (6.5 out of 8). In the ninth round, Shishkin is facing Georgiev whereas Nevednichy takes on the commentator at the FIDE World Cup in Khanty-Mansiysk Alex Yermolinsky with black.

Even more famous grandmaster is the rating-favorite in the Open 65+ section. A legend of Soviet Chess, USSR champion of 1989 Rafael Vaganian is the only player with rating 2500+ among the participants. Vaganian has 6 points under his belt but it will be very hard for him to win the title – in the seventh round, the Armenian GM was defeated by an Italian lawyer and grandmaster Carlos Garcia Palermo. The Italian is holding the top spot (7 out of 8), with several grandmasters, including the Russians Evgeny Sveshnikov and Yuri Balashov, trailing by a half-point.

Women’s events have been attracting the best of the best even before the measures taken by FIDE and this championship is no exception. There are five Russian players in top-10 of the Women 50 section with Tatiana Bogumil leading the field (6.5 points) in the Women 50+. Elvira Berend from Luxemburg (she used to play for Kazakhstan under the last name Sakhatova) is a half-point behind. Two excellent blitz players Galina Strutinskaya (Moscow, Russia) and Nina Sirotkina (St-Petersburg, Russia) are tied for the third place.

Nona Gaprindashvili, the fifth World Champion (1962-1978), is playing in Women 65 section and as usual, enjoys a lot of attention from the audience and journalists. Although the six-time winner of this event is going to celebrate her 80th anniversary in 18 months, she keeps a very high level of play. Sadly, in several games, some deep master plans by the great champion were wrecked by unfortunate blunders.  With 5.5 out of 8, Gaprindashvili and Elena Fatalibekova are a half-point behind the leader, Brigitte Burchardt from Germany.

The championships in all four categories will conclude on Saturday. FIDE.com will follow the tournament progress.

The Chess ‘Racism’ Debate: Why Do White Pieces Move First?