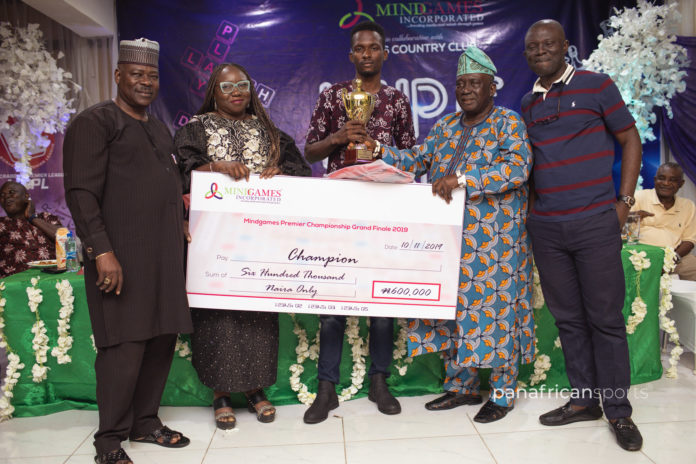 This is by far the strongest rapid tournament in Nigeria in the year 2019, not only because of rating but also in the quality of players that qualified for the finals. 46 Players participated which include, five (5) International Masters:

MPC qualifiers and the Grand finale is the best organized tournament in Nigeria in 2018 at The John Fawole Awards, and with no doubt would most likely clinch the award in 2019.

Ofubu Samson aka Zlater told the entire Nigerian Chess world he was going to defeat Coach Babalola Adebayo also known as Big B, it was a big surprise that he did. Young Ogosi Raphael-Mary, who just came back from the African Juniors Championship in Ghana, defeated FM Adesina Adeyinka. Other favourites won their games.

Day 2 saw FM Abdulrahman Abdulraheem defeating Dasaolu Rotimi (1973) in a very tensed battle, while Ogosi Raphael-Mary held Udeme Edet to a draw. Samson Ofubu also held Ajele Rotimi to a draw with the black pieces.
After losing to AAA in round 2, Evergreen Dasaolu Rotimi (1973) went ahead to defeat Akinwamide Oluwadamilare with the white pieces in round 3. Onovughe Ochuko on board 2 held IM Aikhoje Odion (2276) to a draw.

Coming back from a one hour break, Dasaolu Rotimi (1973) defeated Osunfuyi Abimbola in round 5. Ofubu Samson held IM Adu Oladapo to a draw. The shocker was IM Anwuli Daniel (2284) losing to Ajele Rotimi. The young lad been playing badly in this event. The game between IM Aikhoje Odion (2276) and FM Abdulrahman Abdulraheem ended in a draw while Ajibola Olanrewaju head a peace treaty with Lapite Oluwadurotimi.

Veteran Dasaolu Rotimi (1973) on board 1 was paired against IM Odion (2276) Aikhoje, it clearly showed that the veteran was on rampage as he has been on the spotlight, losing only one game into this round. He defeated IM Odion (2276) Aikhoje and the whole hall erupted with victorious cry as he stormed out of the tournament venue to prepare for the second day. Onovughe Ochuko couldn’t find a win against Ajibola Olanrewaju hence settled for a draw while IM Balogun Oluwafemi (2197) defeated FM Abdulrahman Akintoye. For the first time in history, FM Erhabor David defeated IM Anwuli Daniel (2284) with the black pieces.

DAY 2 THE ART OF COMEBACK

IM Anwuli Daniel (2284) contemplated after the first day to withdraw from the tournament as he wasn’t doing well at all. Losing winning positions or finding himself in bad positions and struggling to find a draw. After much thought, he decided to play the next day after saying his mantra, the art of comeback.

Round 8: Dasaolu Rotimi (1973) didn’t relent by defeating Lapite Oluwadurotimi to keep the lead in the tournament. Anwuli Daniel (2284) playing on board 14 quietly dismantled Onyekwere Macdonald with the black pieces. In the battle of the IMs, IM Balogun Oluwafemi (2197) defeated IM Adu Oladapo.

Round 10: After leading the pack with a whole 1.5 point, Veteran Dasaolu Rotimi (1973) was stopped by Onokpite Kennedy giving IM Balogun Oluwafemi (2197) and IM Odion Aikhoje (2276) the opportunity to close in on him after they carefully dispatched their opponents.

Round 11: Akinwamide Oluwadamilare defeated Ajibola Olanrewaju while IM Anwuli Daniel (2284) defeated IM Adu Oladapo.
Dasaolu Rotimi (1973) was held to a draw by Sunny Eyenghe in round 11, seems the veteran is running out of steam. Akinwamide Oluwadamilare held IM Odion Aikhoje (2276) to a draw while IM Anwuli Daniel (2284) on the winning spree defeated Babalola Adebayo.

Round 13: the tournament leader IM Balogun Oluwafemi (2197) lost to IM Anwuli Daniel (2284). The young man seems to have gotten his groove back winning 6 games in a row. IM Anwuli Daniel (2284) won to be on 9 points while IM Aikhoje Odion (2276) defeated FM Oragwu Chukwunonso (2202) to lead the pack. Veteran Dasaolu Rotimi (1973) couldn’t recover from his loses as he lost to Ajele Rotimi.

Going into the 14th round: IM Anwuli Daniel (2284) was paired against the leader of the pack IM Aikhoje Odion (2276). Anwuli Daniel (2284) won this epic duel to join the leaders of the tournament. IM Balogun Oluwafemi (2197) was held to a draw by FM Osunfuyi Abimbola to join the leaders of the pack. Veteran Dasaolu Rotimi (1973) got is mojo back by defeating CM Omorere Benjamin. Ogosi Raphael-Mary almost defeated Ajibola Olanrewaju but couldn’t find the winning plan hence, a draw. In the battle of the Dapos, IM Adu Oladapo defeated Odugbesan Adedapo succinctly. Interesting among the ladies is Samson Peace defeating Cole Michael.

Round 17
The second to the last round saw the three leaders, dispatching their opponents of easily to maintain the lead. Veteran Dasaolu Rotimi (1973) defeated FM Adesina Adeyinka while Abdulrahman Abdulraheem couldn’t break through the defense of IM Olape Olubunmi.

The Final round saw IM Anwuli Daniel (2284) paired against Ajibola Olanrewaju which the former won to clinch the first position on tie break. IM Odion (2276) Aikhoje defeated Udeme Edet with the black pieces to tie for first place but gets the second position on tie break. The shocker was FM Oragwu Chukwunonso (2202) defeating IM Balogun Oluwafemi (2197). This loss still secures him the third place and shoots the FM Oragwu Chukwunonso (2202) to tie for 8th position.

All Pictures courtesy of MGi can be found here