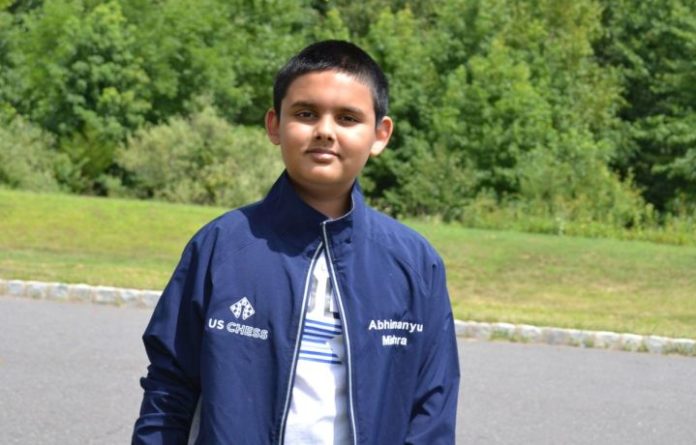 A lot of young talents like Praggnanandhaa, Sindarov, Abdusattorov, Gukesh etc. have tried their best to break Sergey Karjakin’s record of becoming the youngest GM in the world at the age of 12 years and 7 months. But they all missed it by a small margin. Who has the best chance to break this record now? Well, it’s a 10-year-old American boy of Indian origin who lives in New Jersey. Meet Abhimanyu Mishra, the youngest IM in the world. The youngster achieved this feat on November 8th 2019, at the age of 10 years 9 months and 3 days, thereby eclipsing Praggnanandhaa’s record of the youngest IM by 17 days. Learn more about the youngster through this article and have a glimpse of his chess skills through the annotated game that he has sent us!

On of May 30th 2016, at the age of 10 years, 9 months and 20 days, Praggnanandhaa scored his final IM norm and became the youngest International Master in the history of chess. No one believed that this record could be broken in the near future. After all, 10 years 9 months is just so young! But here we are, three and a half years later, and Abhimanyu Mishra from the United States has already eclipsed Pragg’s record!

Abhimanyu achieved his final IM norm at the Chess Max Academy 1st Fall GM Invitational. Starting as the eighth seed Abhimanyu was a picture of solidity as he scored nine draws out of nine rounds to achieve his final IM norm. With this performance, the youngster completed all the requirements for his IM title.

The final round of the event ended on the 8th of November 2019. Abhimanyu, born on February 5th 2009, thus achieved his IM title at the age of 10 years, 9 months and 3 days. This is 17 days faster than Praggnanandhaa. Abhimanyu Mishra is now the youngest IM in the world.

The youngest IM in the world | Photo: David Llada

More about this achievement.

“Praggnanandhaa is a world-class player and it seemed almost impossible to break his record. I feel proud that Abhimanyu has managed to do that. It is a dream come true for the entire family. Abhimanyu has been working very hard for the past three years. In that process, he became the youngest Expert and Master in USA chess history as well. There have been many failures on the way but the whole team was determined to take on the challenge”

Abhimanyu with his father Hemant and GM Maxim Dlugy

It was Abhimanyu’s father Hemant who taught him the rules of chess when he was just two and a half years old!

So who are the members of Team Abhimanyu? Says Hemant:

” I would like to thank GM Arun Prasad, GM Magesh Panchanthan and WFM Anuprita Patil for their hard work and support in his journey. I would also like to thank Kasparov Chess Foundation team (Garry Kasparov, GM Alexander Chernin and Michael Khodarkovsky) for support and encouragement. Apart from that thanks to Bill Goichberg, Greg Shahade, Jennifer Shahade and GM Maxim Dlugy and all the chess enthusiasts who donated on Abhimanyu’s Gofundme page”

WFM Anuprita Patil laid the foundation, GM Magesh Chandran worked on the basics of his middlegame and endgame understanding, and GM Arun Prasad worked with him extensively to broaden his opening repertoire among other things.

” Abhimanyu is a hard working kid. His thirst for knowledge is immense. I am working with him since he was six. Basically there were no difficult concepts for him. I can teach him anything and everything and he will understand it relatively easily. He has a phenomenal memory, excellent calculation and most importantly he is hard working. Definitely we will see him among the world’s top players in a few years”

“You asked me only about Abhimanyu but I also need to make a comment about his father’s contribution. He should not be an unsung hero. His father is the true strength behind his success. As we know how difficult it is to handle kids. He inspires him to work hard and keeps him motivated”

“Abhimanyu is full of energy. He just loves chess so much, he will talk about moves and analysis and go on different tangents about his games. Our sessions routinely go over the scheduled one hour. I remember meeting Nihal Sarin in 2017 at the Isle of Man. Nihal was rated right around my rating and as a result we used to play right next to each other for several rounds. Since I got to see so many of his games, I would sometimes ask him about it and that’s all it took, Nihal would rant out his analysis and his decisions about the moves — it was fascinating to see that and I see the same quality in Abhi. It’s so easy to talk about chess to him because he is already dying to”

Lastly, I remember a funny anecdote. When Surya Ganguly did a training camp a few years back, Abhi was rated around 1800 or so… The class had all top players like Brandon Jacobson and Praveen Balakrishnan, who have both gone on to become IMs and are on their way to GM title. One of the players raised his hand and complained to Surya saying Abhi is looking at his answers, when Surya asked Abhi, he promptly responded saying, ‘He is lying. I was not looking at his answer, I was looking at this other person’s answer!’ Pointing his finger to the other student to his left! Surya of course couldn’t stop laughing about it!

One of the movies that inspired Abhimanyu to work hard on chess was the Farhan Akhtar feature Bhaag Milkha Bhaag. “I would like to thank Milkha Singh and the cast of “Bhag Milkha Bhag”, says Hemant. “It provided constant inspiration to Abhimanyu during his painful journey. He watched this movie many times and understood what it takes to be world-beater.”

Swati Mishra, Abhimanyu’s mother, took care of everything at home, to ensure that Abhimanyu and his father could travel to events

So what are Abhimanyu’s aims now?

“His short term goal is to become the youngest GM in history. He will play in more closed GM invitational events in near future all over the world. The long term goal is become World Champion one day and rule the world of chess the same way as his idol GM Garry Kasparov did for many years”, says Hemant.