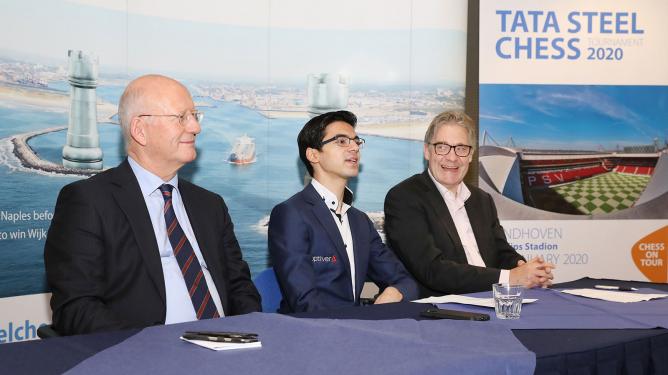 The top two players in the world, Magnus Carlsen and Fabiano Caruana, will meet in January for the 2020 Tata Steel Chess Tournament. With Anish Giri and Ian Nepomniachtchi, the field of the masters has four players from the current world’s top 10.

For Carlsen it will be the 16th (!) time that he’ll play in Wijk aan Zee, the small town at the Dutch coast that has been hosting the tournament since 1968. Before that, the tournament was held in Beverwijk between 1938 and 1967.

Carlsen has won the tournament a record seven times. The five-time winner Viswanathan Anand is also playing again, and the 2017 winner Wesley So will be back.

Recently, in a league game in Norway, Carlsen improved his undefeated streak to 102 games. It looks like the Grand Chess Tour’s playoffs in London will be Carlsen’s next classical event, which has four classical games.

Then Tata Steel will be next, and as long as he doesn’t lose, he will beat Sergey Tiviakov’s streak of 110 games in Wijk aan Zee in round five, on Thursday, January 16.

At today’s press conference, the tournament director Jeroen van den Berg noted that once again a special mix of participants has been put together.

“With six grandmasters making their debut, the Tata Steel Chess Tournament 2020 will be a clash between the establishment and talented young players. Jorden van Foreest, Vladislav Artemiev, Jeffery Xiong, Alireza Firouzja and Jan-Krzysztof Duda are all 21 years old or younger.”

The youngest of them all is the 16-year-old super talent Firouzja. Artemiev is the reigning European champion, and Dubov and Duda are becoming household names as well. At the time of writing they’re both in contention to win the Hamburg Grand Prix.

“At many tournaments I only see the world’s absolute top players facing off, but I personally prefer a more mixed playing field,” said Van den Berg. “It will be very interesting to see how young talented players perform against the world’s best players.”

The 82nd edition of the Tata Steel Chess Tournament will take place January 10-26 in Wijk aan Zee, the Netherlands. There will also be a Chess On Tour Event (the only one this year). The players of the masters will play their fifth round in the Philips Stadium in Eindhoven on Thursday, January 16.

Theo Henrar, chairman of Tata Steel Netherlands, said: “One of this year’s themes will be the linking pin character of chess. In cooperation with the municipality of Eindhoven, PSV, Brainport and local chess clubs we will organize tournaments and seminars at the Philips Stadium. In doing so we will link professional sports, talent development and physical and mental fitness. For children we will organize a special Chess Festival weekend in Wijk aan Zee and a big tournament in Eindhoven.”